Poured bleach on award-winning BBQ, then tossed it in the dumpster 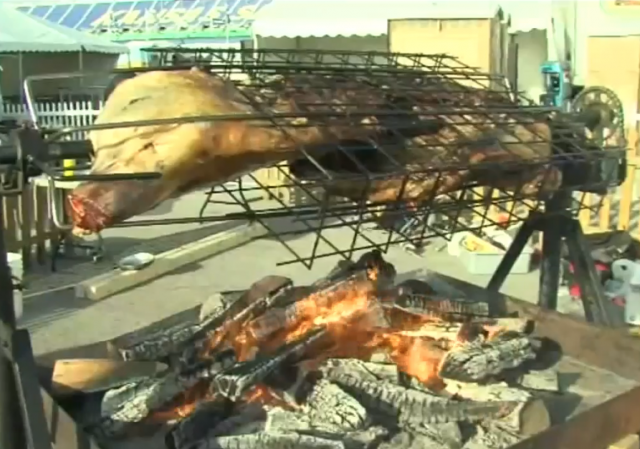 The federal government gets much of attention for being The Worst™, and rightfully so. But oftentimes local governments and their officials are truly as awful as they come.

The latest tale of sorry and woe comes to you from Kansas City. There, Health Department officials poured bleach on 700 lbs of BBQ that was set aside for the needy, rendering it inedible. Worse still, thousands who showed up for a BBQ lunch were turned away because there was nothing left to feed them.

Why was the food tossed? A labelling issue. Supposedly. Though the Health Inspectors wouldn’t elaborate. They also said they couldn’t tell where the food came from, but according to Hope City, they never bothered to ask.

Volunteers collected thousands of pounds of what they call “perfectly good barbecue” from the annual event to feed the hungry. But when Kansas City health inspectors found it, they threw it in the garbage.

Harvesters Community Food Network said a labeling error led to the issue, but didn’t elaborate on how it occurred.

Hope City, the organization that helps to collect the leftover BBQ from the American Royal BBQ festival, sent trucks with food safety experts to ensure all food was handled properly upon collection.

“It was the whole gamut, if you can think of the most magnificent barbecue spread that’s what we threw away yesterday by the hundreds of pounds,” Hope City Associate Director Bill Durkes said.

For five years now Kookers Kare, a group of barbecue chefs with hearts as big as their stomachs, has worked with Harvesters to collect the extra food not turned over to judges at the competition. This year that was more than 3,000 pounds of meat, and 1,200 pounds of sides.

The organization’s president, Gary Denham, said they had a refrigerated truck at American Royal, and his team of food safety experts only collected food that was either piping hot or ice cold.

It’s then distributed to ministries with food kitchens like Hope City on Kansas City’s East side.

“Everyone out there is like all right we are going to eat. Beans, potatoes, brisket, burnt ends, ribs, it’s awesome,” Durkes said.

But when Kansas City health inspectors showed up just as they were about to pass out the food to 150 hungry and needy recipients, the inspector ordered about 700 pounds of barbecue to be thrown out. It was then covered in bleach to make sure no one tried to get it out of the dumpster.

“They were expecting lunch and for it to be a really good lunch and just having it taken away it was a bummer, we were all bummed out,” Durkes said.

Health officials say the food was destroyed because it wasn’t from a permitted establishment, and they couldn’t track where the food had been. Therefore, they couldn’t ensure it’s safety.

Denham said if health inspectors had any questions they should have just asked. Instead hundreds already went hungry, and it appears as many as 3,000 people won’t get meals as a result of the recall.

3,000 people could’ve been fed. THANK GOD the government was there to make sure they go hungry!

As Ronaldus Magnus observed, “The most scary words in the English language are,”I’m from the government and I’m here to help you.”.

The worst BBQ from the American Royal beats the best that can be found anywhere else; throwing out a portion of it designated for those in need should be designated as a felony! People come literally hundreds of miles to cue up in long lines to get a taste, and there are health inspectors all over the place to ensure public safety.

But I agree with you it’s ridiculous.

Especially when you consider the origin of Charcuterie and BBQ. The curing and smoking of meats not only renders it tender and imparts fantastic flavors but also preserves the meats. These methods were invented centuries ago as a means of preserving meats.

I can understand being concerned about the slaw and the potato salad, but the meat? No way.

I don’t believe we are hearing the whole story, just yet. I wonder who p!ssed whom off, and how?

The answer to that depends on whether the BBQ was pork or beef . . .

I know a good bit about food pathogens, and the chances of anyone being hurt by smoked meats is pretty close to nil.

Bingo, as a nurse with 5 years working for a GI doc I can tell you that you are exactly right.

Also, even if it does have a pathogen in it there is a reason our stomach’s digestive juices contain things like Hydrochloric Acid, because many pathogens can’t survive in that environment and are eliminated almost immediately upon hitting the stomach.

Obviously this brings up the following questions, only because they are, in today’s world, reasonable questions.
Question 1: Were the city inspectors Muslim?
Question 2: Even if the answer to 1 is no, was the food destroyed because it wasn’t halal?

I mean, if you can’t use the food to feed all the poor because their religion doesn’t allow it, you can’t use it to feed any, for that would be wrong, right?

Makes sense, in a prog sort of way. It’s a variation of “making everyone poorer so that none can be richer,” a perennial prog favorite.

Sorry, not going to get as hysterical as a leftie over this. A “labeling error” led to “confusion”. I’ll just bet it did. And what other errors did they make? Assurances by the people involved that it’s “perfectly good” hardly constitute good epidemiological practice. You’re not doing “the needy” any favors by feeding them something which is likely to make them sick.

At least this wasn’t turkey. Turkey is notorious for making even people at health inspector’s banquets sick. This seems to be because turkeys are basically fed garbage, much like pigs, and not decent feed, like that stuff which infects entire herds of cows with BSE.

Sanitation was one of civilization’s most difficult accomplishments. Science was measuring the altitudes of the mountains on the moon a f*****g century before it figured out what spreads disease. Workable modern standards can’t be maintained by taking shortcuts.

“This seems to be because turkeys are basically fed garbage, much like pigs, and not decent feed, like that stuff which infects entire herds of cows with BSE.”

tom, you’re an idiot. Sorry. No other way to put it. You simply are. You know shit about what you said.

The huge majority of turkeys raised in the US are grain fed because Turkeys convert grain to meat at a ratio of 2 lbs to 1 lb. They are the MOST efficient meat animal in the world except for the catfish.

You can’t walk into a piggery without sanitizing your footwear.

This is ALSO true for any kind of modern poultry operation. One of the prime risk factors is ALWAYS the spread of a disease, which can wipe out a whole operation in hours.

Where do these people get this insane mythology?

Ironic his screen name is swift, because he ain’t.

Turkey is a Nato country. While you might dislike their dietary habits calling their food garbage is a bit much. Racist.

For tens of thousands of years our ancestors ate whatever was left laying on the ground after the other predators with bigger teeth and sharper claws had full tummies.

ugh
the general meme seems to be its better to starve them then let them eat something and POSSIBLY get sick.
stupid thinking.

There’s an infamous story of do-gooders from the City Of Houston killing a program run by the local black churches that fed hundreds of people every day over “health concerns”.

The same kinds of people from government would prevent the distribution of blankets in freezing weather because they weren’t “sanitized for your protection”.

Then they’d go home an snuggle down in their down comforters with the thermostat set at 72 degrees.

Same thing happened her. The food wasn’t cooked in a certified kitchen so let the homeless go hungry. Sometimes bureaucrats need their knees broken so they can see the big picture.

The sad part is how many of those hungry people will be in that dumpster later and trying to wash the bleach off of the food?

This is just standard “following the rules” that most if not all health departments practice regardless of common sense or compassion. When I was in college in the early 1990s, several of us made dozens of PB&J sandwiches and went to a downtown park one Saturday to feed the homeless. Three weeks later we repeated the kind act. Someone from the county health department was already there to stop us. They must have staked out the park the previous two weeks. Their rules required that food be made in an inspected and licensed facility and a permit (several hundred dollars) required to sell or distribute food.

I would have told them to GFY and kept handing out the sandwiches.

I would have set up a picnic, invited all the homeless to it, and told the inspectors “Sod off. This is a private party.”

Since when was is ok for the “Health Department” to use bleach to poison food that might be eaten by poor animals?

Since when did health inspectors show up with many gallons of bleach, they were sent on a mission to destroy the food. If i lived there i would find out who sent them whether state, county, or city and make certain that was their last elected office.

This pisses me off. My brother, his wife, and her brother, actually competed in this (they won 4th place out of ~600 teams, by the way). I’m so disgusted with my city…

they have been doing this for years…

i wonder if it was driven by the fact that namy of the competitors are likely Trump supports?

in general, the folks who compete in events like this are certainly one of his core demographics…

PS: “”doing this for years” = donating the food… not only at the American Royal, but at many of the smaller events that lead up to it.

this is government at it’s most raw, to make a food related funny.

And will the volunteers be reimbursed or compensated for the Health Department’s mistake?

Big Government does not like competition to their welfare programs from the private sector.

They’re competing with food stamps. Can’t have that!

And then went home, still wondering why Trump was elected.