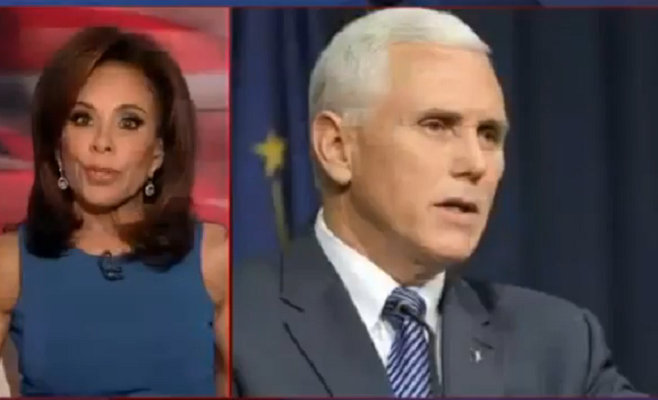 Yesterday, I wrote about the audience booing Vice-president Elect Pence and the cast lecturing him on, of all things, inclusiveness and tolerance. Judge Jeanine devoted her Opening Statement to the incident, and as usual, she not only nails it but does so with great aplomb.

In her Opening Statement, Judge Jeanine Pirro tore into the “Hamilton” cast for their “inappropriate and disgusting” comments toward Vice President-elect Mike Pence at the hit Broadway show.

Pence was also booed by the crowd Friday night as he entered the theater with his family in what Judge Pirro called “outrageous and embarrassing.”

“What happened in that theater – one block from here – was out and out reverse racism, and tee’d up hate for a man who has done nothing to deserve this inappropriate and disgusting behavior,” she said on “Justice.”

Pirro said Pence was trying to enjoy some time with his family after the grueling campaign and post-election transition work, but instead his presence was used “as a political bully pulpit.”

She noted that Hillary Clinton and Bernie Sanders attended the show in the past without issue.

“Last night violates everything you say you stand for. That big tent, inclusive broad-minded acceptance of everyone, even people who don’t look or act like you. What happened to your old ‘love trumps hate’ line? You’re all damn hypocrites!” she said.

A wonderful comment but ultimately wasted on the ignorant.