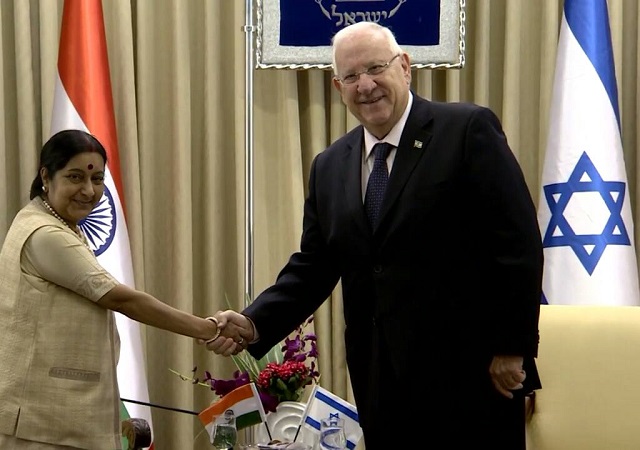 Israel’s President Reuven Rivlin will visit India on a six-day tour starting November 15. Israeli President will be accompanied by a “delegation of unprecedented size comprising businessmen and university officials”, Indian newspaper The Hindu reports. President Rivlin will become the second sitting Israeli President to visit the South Asian country since the establishment of diplomatic ties between the two nations almost twenty-five years ago.

President Rivlin and his Indian counterpart, President Pranab Mukherjee, will preside over the signing of a number of cooperation agreements ranging from agriculture to national security.

Indian media speculated that the upcoming visit might pave the way for Indian Prime Minister Narendra Modi’s visit to the Jewish State, first ever by an Indian Prime Minister. Prime Minister Modi is expected to visit Israel next year when two countries mark the 25th anniversary of the establishment of bilateral relations in 1992. Indian newspaper Indian Express reports:

Israeli President Reuven Rivlin will lead a high-profile delegation on a six-day visit to India in mid-November to boost cooperation in the field of security, education, cyber, energy, water and agriculture. Informed sources said Rivlin will meet President Pranab Mukherjee, Prime Minister Narendra Modi and Lok Sabha Speaker Sumitra Mahajan among others during his visit.

Rivlin would be only the second Israeli President to visit India since the establishment of diplomatic ties between the two countries in 1992 and his visit comes almost after a gap of 20 years since former President Ezer Weizmann visited India in 1996-97.

Rivlin will lead a high-profile delegation of business leaders and academics during the six-day visit to India.

I’ll be there with Prof uriel reichman, president and founder of @IDCHerzliya signing cooperation agreements with leading universities. https://t.co/NCvYtdFFBk

Today, Israel-India cooperation spans across wide-ranging fields from agriculture and urban planning to cancer research and space exploration. Israeli agency for international development MASHAV is working to set up 26 agriculture technology centre across India by the end of 2017 — out of which 15 are now operational. In July, 150 Israeli and Indian start-up teams came together in Tel Aviv, Bangalore, Hyderabad and Mumbai to develop on healthcare solutions for rural India — a segment ignored by healthcare multinationals and big pharma.

President Rivilin’s visit comes almost one year after India’s President Pranab Mukherjee’s trip to the Jewish State — first ever by an Indian president. This presidential visit is not only a cordial diplomatic visit to a friendly country but would open doors for further cooperation between the two nations.

I happen to believe that when Indians and Israelis get together and cooperate, the entire world will benefit.
I’ve used Israeli designed communications equipment in my projects as well as Indian designed. Both are superb. If the U.S. Government would just get out of the way of people here, we’d start that big ole design/manufacturing engine back up again and look out!!
When people cooperate and work hard, and the government gets out of the way, there is no limit as to how many great things can happen. After all the Cubs just won the World Series.

But who would the bureaucrats have to annoy then? The alphabet agencies have to have victims to screw with and the congress doesn’t have the cajones to cut their budgets. The congress is either too lazy of to scared to even produce a budget. We are screwed.

Read Caroline Glick, who reportedly reflects Netanyahu’s thinking. The arc of her columns for the past year has been to urge a slow-pivot away from Europe and the US and a move towards India, Russia, China, and Latin America.

It makes sense for many reasons–Israel has advanced technology, potential basing, and soon, enough natural gas to power some of these places for years.