No one liked Weiner.

Wikileaks released emails that showed Hillary Clinton’s camp began worrying about Anthony Weiner during his first sexting scandal in May 2011. 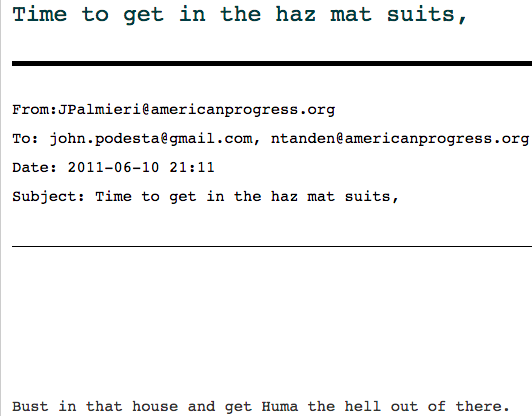 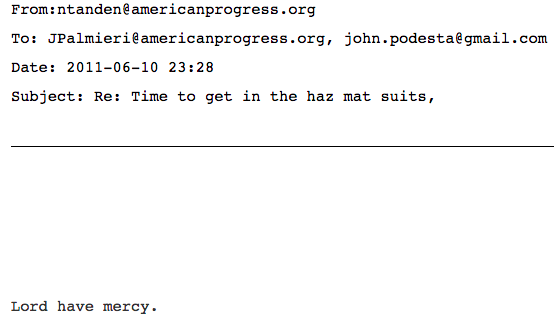 Weiner’s sexting skills came to light in 2011 when he accidentally posted a revealing photo on his public Twitter timeline. Andrew Breitbart ran the story, even taking over Weiner’s press conference to address the issue. The liberal media went haywire, even accusing Breitbart and then Big Journalism editor Dana Loesch of hacking his Twitter account and posting the picture.

Well, Weiner admitted he did it and resigned from Congress. He went into rehab and launched a campaign to become mayor of New York City with Huma by his side. But that went into a downward spiral when Sydney Leathers revealed he sexted her under the name Carlos Danger. He finished fifth, but Huma did not leave her husband.

But Abedin finally left Weiner in late August after ANOTHER sexting scandal emerged, but this time he took crotch shots in bed with their 4-year-old son.

It only got worse because a 15-year-old girl in North Carolina said she sexted with Weiner. The FBI started an investigation, which led to agents finding new pertinent information for the FBI to reopen its case into Hillary’s private email system:

Federal agents are preparing to scour roughly 650,000 emails contained on the laptop of former Rep. Anthony Weiner to see how many relate to a prior probe of Hillary Clinton’s email use, as metadata on the device suggests there may be thousands sent to or from the private server that the Democratic nominee used while she was secretary of state, according to people familiar with the matter.

The review will take weeks at a minimum to determine whether those messages are work-related emails between Huma Abedin, a close Clinton aide and the estranged wife of Mr. Weiner, and State Department officials; how many are duplicates of emails already reviewed by the Federal Bureau of Investigation; and whether they include either classified information or important new evidence in the Clinton email probe, which FBI officials call “Midyear.”

The FBI has had to await a court order to begin reviewing the emails, because they were uncovered in an unrelated probe of Mr. Weiner, and that order was delayed for reasons that remain unclear.

Perhaps Rolling Stone could do an article on Huma and the Weiner and their sex life.

This case is way bigger than sexting a 15 year old – as disgusting as that is. Both Abedin and Weiner are in huge trouble.

Why do Democrats always infantilize women?

Huma wasn’t forced to marry Weiner, or forced to conceive a child with him, or forced to stay with him after his perversions became public knowledge. She chose to be with him.

Of course, since Democrats think they have some divine right to dictate how the rest of us live, it’s probably no surprise that they think Huma needed to be “rescued” from the consequences of her own life choices.

If these people were Republicans the headline would be, “Religious Fanatics plan break in, abduction of high level aid.”

Is it any surprise that Hillary wants to keep Huma away from Weiners?

Huma isn’t half the woman Hillary is. Hillary stood by HER pervert.

I have long thought that Huma’s history fits the pattern Hillary set. Hillary married a sex maniac who had great political potential. When Huma married Anthony, he also looked like he would be a Democrat star. Each woman had a child with the husband while really being much more interested in the political life. Huma’s own sex maniac wasn’t able to keep his activities private. He’s obviously a liar, like Bill, but unlike Bill, he provided evidence. The only time Bill got into real trouble was when he also left evidence (on the blue dress).

It *sounds* like the NYPD collected the laptop first and imaged it for their investigation before turning it over to the FBI. If the laptop contains federally classified material, I presume the FBI can order that image destroyed before non-cleared people can review it, BUT would that be prima facie evidence that Huma was in possession of classified materials on her non-classified laptop?

Seriously though, at this point in the campaign, Hillary could fire a machine gun into a crowd on national TV and all that would happen would be greater support for gun control on all the networks.

Let me clear it up why it took so long to look at Huma’s laptop. Because the DOJ has been completely politicized and corrupted by the O administration.