Gallup’s post-election poll shows that the majority of Americans (76%) were surprised by Tuesday’s results, and they found that Trump supporters feel “excited” and “relieved,” while Hillary supporters feel “afraid.”

. . . . [W]hen asked whether each of six adjectives describes how they are reacting to the election results, Americans do not overwhelmingly identify with the most negative terms. Almost as many say they are “relieved” (40%) as say they are “afraid” (42%). About the same percentages describe their reaction as “excited” (35%) and “devastated” (34%). 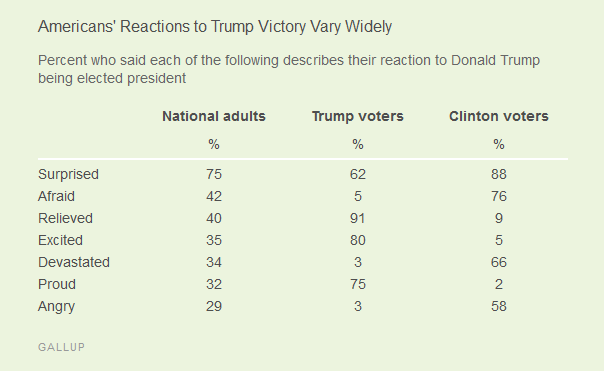 The breakdown of responses among Trump and Clinton supporters and by age are also of interest.

Huge differences exist between Trump voters and Clinton voters, with somewhat smaller differences between Republicans and Democrats as well as between younger and older Americans.

For some perspective, Gallup notes that the Democrat feeling of being “afraid” is the same as the Republican feeling in 2012 (yet we somehow managed not to make a complete spectacle of ourselves by vandalizing property, beating people, and otherwise behaving horrifically).

However, a comparison of reactions this year with those in 2012 shows the percentages of Americans “excited” about and “afraid” of each outcome do not greatly differ. Further, 66% of Republicans in 2012 said they were “afraid” when reacting to Obama’s re-election, the same as the percentage of Democrats who now say they are “afraid.” (In 2008, 53% of Republicans said the election outcome made them “afraid.”)

Obama’s re-election in 2012 and his subsequent inauguration occurred without widespread unrest or challenges to his legitimacy. The question moving forward after numerous anti-Trump protests Wednesday night and the threat of more to come on Inauguration Day is whether the anger and fear of those who oppose Trump will produce a different result.

Gallup also found that 84% of Americans accept Trump as a legitimate president. The poll was conducted on the Wednesday, so it was before the doomed attempts to get the Electoral College to anoint Hillary gained steam.

Gallup compared the results of the “legitimacy” survey to those it conducted in 2000 on the single point that Gore, too, won the popular vote but lost the election.

After Donald Trump’s surprise defeat of Hillary Clinton in the highly contentious 2016 presidential campaign, 84% of Americans say they accept Trump as the legitimate president, but 15% do not. Among Clinton voters, 76% accept Trump and 23% do not.

. . . . Gallup asked the same question about George W. Bush in December 2000, and found 83% of Americans accepting Bush as the legitimate president, essentially the same as the percentage who now accept Trump. That poll was conducted just after the Supreme Court voted 5-4 to end a contentious recount in Florida, which allowed Bush’s original slim Florida vote margin to stand and effectively made him president. 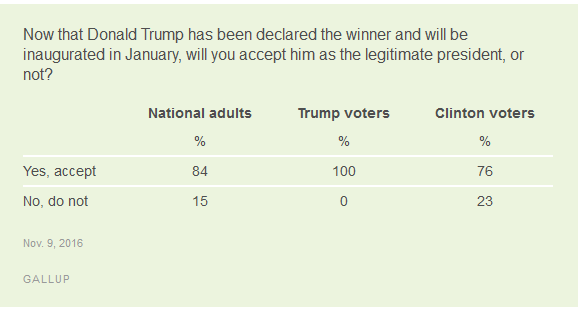 Perhaps understandably, Al Gore supporters were somewhat less likely (68%) than Clinton voters today (76%) to accept the president-elect as legitimate. The overall numbers are similar, though, because Americans with no candidate preference in 2000 were more likely to accept Bush as legitimate than the comparable group this year is to accept Trump.

Like Gore, Clinton won the popular vote but lost the Electoral College. However, Trump’s Electoral College tally is more decisive than Bush’s and not dependent on favorable legal rulings. Still, just as many Americans say they cannot accept Trump as president as said the same about Bush. Trump’s controversial statements, actions and policy proposals may cause some Americans to view him as unworthy of the office, even though his victory was beyond dispute.

Yes, it is beyond dispute, and the “spoiled crybaby” progressives wailing in the streets and setting things on fire, including the American flag, will eventually figure that out.

Of *course* Hillary voters are afraid of what will happen now that Trump is going to be President. Her campaign spent endless hours spinning tales of doom and gloom about what would happen if they didn’t support Her Highness, and now that the fantasy terror tale they spun has come true, they expect what they were promised.

Let us hope that the next four years makes them realize just how badly they were lied to by their candidate.

They are also projection. Because if *they* had won, they would be gloating at all the ways they intend to persecute us. Like little nazis afraid we are going to line them up against the wall and shoot them, because that’s what they would have done.

See how fast they scream for “a return to the Constitution.”

Bein’ a real retarred sykologist an’ all, seems to me that a certain set of socio-culturally bonded liberal citizens have allowed dependence on Goddess Government to supplant self determination and self reliance, and so, it is no surprise to see so many of them completely fall apart when they realize their Goddess has died. Who take care of them? Think for them? Tell them what to believe and what to do? Still, their tears are twice as sweet as Tupelo honey.

Surprised and Relieved. That sounds right.

Meanwhile, the one word in the English language with the greatest identity crisis will once again change its definition.

2017-? meaning: the highest form of patriotism.

Where are the polls that speak of the fear instilled by all the actions and rioting by the left wing nuts upon those who dutifully and legally elected our next president? Where is Facebook and Twitter in applying their “banning policies” by allowing death threats of assassination? Where is the F.B.I. and Secret Service to call them out on the death threats to our elected president and file charges? When will they be held accountable for inciting riots, the disruption of public streets and destruction and defacing of public and private property? When will these snowflakes just damn well be held legally accountable for anything including the right to allow the majority their voice?

Hillary supporters are mostly surprised, though.
And 15% of them are not accepting his legitimacy.

That’s verging on a dangerous number, if they really mean illegitimate. (Which they probably do — I remember 2000.)

Are these the same polls that said Donald Trump had no chance of winning?

Correction there: It’s 15% of “National adults” who do not accept while 23% of “Clinton voters” do not.

No, hunny. This is Gallup, the polling outfit that gave up polling on candidates popularity pre-election.

Do try to read up…

I give up. How in the world did that happen?! The reply was supposed to be in response to edgeofthesnadbox. And, no, I’ve not been into the libations ………………… yet!

After the twilight, a fresh perspective, the dawn of a new day.

And worried. Worried that schadenfreude is fattening.

Well, it is really sweet tasting.

Who should be afraid?

First, Clinton and her gang of criminals, for indictments for more felonies – including treason – than one can type in short time.

There’s nothing he’s doine that isn’t firmly protected by the first amendment. A good deal of the garbage linked in that section of the USC is not law, because it purports to criminalize protected expression.

“There’s nothing he’s doine that isn’t firmly protected by the first amendment.”

If he’s just hiring people to protest, then you’re right.

If he’s hiring them to incite and participate in rioting and violence, then that’s *not* a first amendment issue.

“I hired them to protest, I didn’t know they were going to riot.”~~ G.Soros.

I assumed all those people were just unaware of cures for diaper rash.

Current through Pub. L. 114-38. (See Public Laws for the current Congress.)
US Code
Notes
prev | next
(a) Whoever travels in interstate or foreign commerce or uses any facility of interstate or foreign commerce, including, but not limited to, the mail, telegraph, telephone, radio, or television, with intent—
(1) to incite a riot; or
(2) to organize, promote, encourage, participate in, or carry on a riot; or
(3) to commit any act of violence in furtherance of a riot; or
(4) to aid or abet any person in inciting or participating in or carrying on a riot or committing any act of violence in furtherance of a riot;
and who either during the course of any such travel or use or thereafter performs or attempts to perform any other overt act for any purpose specified in subparagraph (A), (B), (C), or (D) of this paragraph— [1]
Shall be fined under this title, or imprisoned not more than five years, or both.

With dreams of revitalization, rehabilitation, and reconciliation dancing through our heads, following the twilight, a fresh perspective, the dawn of a new day.

Nonsense results are a good lower estimate of one of the systematic errors in a poll.

They never include those in the “error” estimates published with polls. (This statement is a matter of math, not speculation.)

Such an awesome polling and its reporting of it by AP.

*Deadpan* In other news, water is wet.