Where is the uproar?

DNC Chairwoman Donna Brazile tried her hardest to deny ever sending Hillary Clinton townhall questions in advance of the event even after a tech person found the email was not fake.

Today’s Wikileaks dump reveals that she sent even more questions to the campaign: 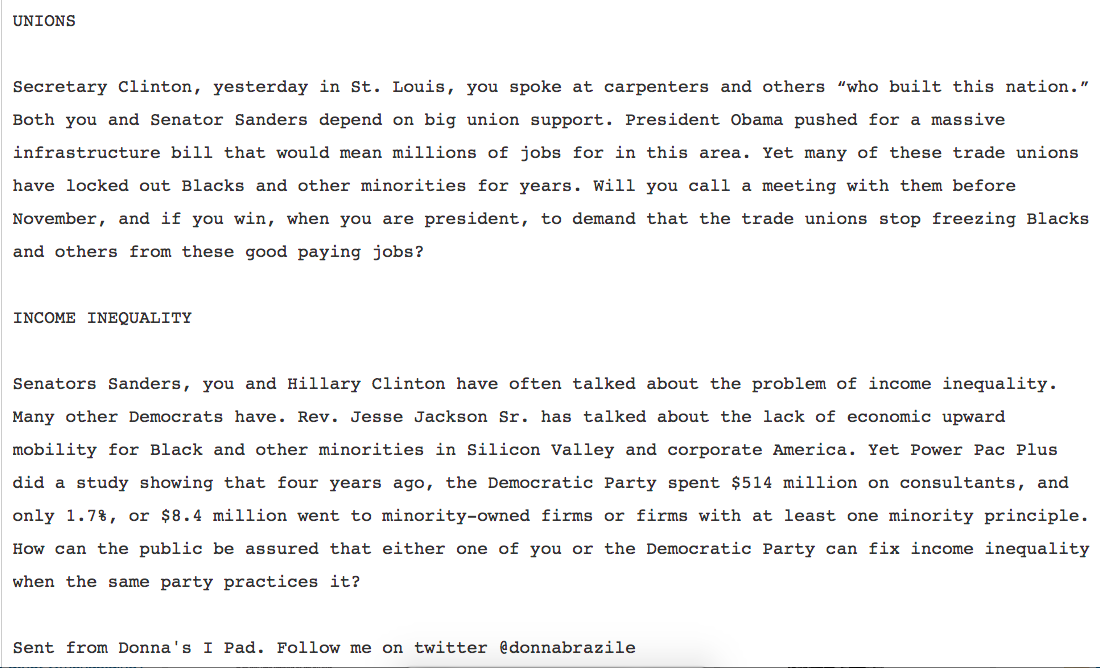 Mediaite compares Brazile’s question on unions to the one Roland Martin asked Hillary:

MARTIN: Secretary Clinton, yesterday you were in St. Louis, and you talked about carpenters and the rebuilding of the country, the folks who built this nation.

MARTIN: And, both you and Senator Sanders have significant union support, yet many of the trade unions that – we walk about built the country, they’ve locked out black folks and other minorities for decades. Would you, even right now, and even as president, call a meeting with the trade unions and say it’s time for you to open up those doors and bring in more African-Americans and Hispanics, and others be because those are high-paying jobs. And, if we keep saying rebuild America with a huge infrastructure and billions of dollars, they’re the ones who are going to do it. And, black folks and others are going to be left on the outside looking in.

She’s a black Christian who “knows what persecution is”. That’s her well honed shield and it works every time.

Rather, she is just another fat, black, know-it-all, self-righteous bitch.

America had soon cast off the chains of political correctness. If a person who happens to be black is horrible, we need to be able to call them on it without the fear of the “RAAAAACIST!” label.

Left side of the bell curve for ethics.

You left out “Woman” and “muslim”. That would have covered all the bases of political correctness.

A deplorable attitude that resulted in an irredeemable lie.

This is not the big story of this election. Yeah, Hillary is corrupt (and so is Donald, and in very similar ways, considering that he also destroyed emails, took bribes from our enemies, etc.) and it sucks that she got help from the media.
Did it help her in the debates? Hardly. Any semi-experienced debater anticipates questions and knows how to answer them. Hillary pulled some mind tricks o her opponent and Donald was unprepared.
We already know that the media is Dem-leaning.
Donald hurt himself with his inane ramblings.

This is a HUGE issue for this, and every other election held in recent times. This speaks directly to the corruption of the mfm and how they have become dyed in the wool Democrat supporters and is just one of the many reasons why the mfm is despised by so many these days.

You may not feel this is an issue but that is more a reflection of your own personal politics and nothing more. For those who still have the critical capacity of rubbing 2 or more brain cells together this is a HUGE issue.

Yes, corruption. But she already resigned and none of it affected the outcome of the debates.

She says her conscience is clear. Of course. When you’re an arrogant political hack, anything you do is justifiable because you’re morally superior to all of those deplorables. She and the “Reverend” Wright are both Christians? Evil hypocrites is what they are.

Only sociopaths have clear consciences. hillary is an obvious sociopath with no conscience or feeling for anyone but herself. The fact that EVERY position she now has was obtained through focus groups. I simply cannot imagine how she could lead this nation because she has no center from which to lead. Her opinions are evaluated by others and processed before they become hers. What will she do in a crisis?

She is known as Dirty Donna for a reason…

Typical prog. Caught with her claw elbow deep in the cookie jar and she proclaims indignation at being shown as a liner and a cheat.

The entire debate format needs to be reformed to remove the inherent Democrat leaning bias altogether. If it cannot be reformed then the whole format should just be canned.

Dirty Donna is just like Crooked Hillary. They are both bold faced serial liar’s and proud of it.