Ben Shapiro banned at DePaul Univ., but no problem with fundraiser for terrorist murderer Rasmea Odeh

The Young Americans for Freedom chapter at DePaul University invited Christina Hoff Sommers and Ben Shapiro to speak on campus. At some point, the administration decided not to allow Ben Shapiro on campus over supposed security concerns, even threatening him with arrest if he set foot on campus.

In an ultimate twist of irony, the subject of Shapiro’s speech was free speech on campus.

The YAF blog has the details:

Despite having no apparent problem hosting prominent leftists in the past, DePaul University is working to obstruct DePaul Young Americans for Freedom’s scheduled lecture with Christina Hoff Sommers, after the chapter announced Ben Shapiro was slated to make a guest appearance.

To great media criticism DePaul banned YAF from hosting Ben Shapiro in August. In response DePaul YAF, Young America’s Foundation, and Shapiro decided the campus needed his message and planned to host him alongside Sommers in order to make a powerful statement about the importance of ideological diversity.

As of Tuesday morning, DePaul administrators were actively working to prevent students from hearing Shapiro’s message on campus that evening.

Once it became clear that Shapiro would be barred, people sounded off on Twitter. Here are a few reactions via Twitchy:

@DePaulU Do not bow to mob veto, have some self respect and stand for free speech. #FreeDePaul

Yes, we will be livestreaming events as they occur at DePaul this afternoon. Thank God for cameras. #FreeDePaul

Does nobody else see the irony in this? #FreeDePaul https://t.co/b4Iw5Tq3ZL

Shapiro showed up at DePaul and was greeted by 30 security staffers. Video via the Daily Wire:

Shapiro ultimately gave his speech at a theater a few blocks away. When Christina Hoff Sommers finished speaking, the audience walked to the nearby venue.

We reached out to Ben Shapiro for a statement. He sent the following:

“A major university threatening to arrest a speaker on behalf of free speech for presumably creating a threat of violence — without any threat of violence or even any protesters — is a full-scale demonstration of the left’s fascism. They’ll use any excuse to avoid talking about issues that matter, up to and including the rioters’ veto, even when there are no rioters. YAF told me that the Black Student Union was fine with me coming, actually.”

Someone should ask DePaul to explain why so much force was used to keep Ben Shapiro off campus, when convicted terrorist Rasmea Odeh was allowed to hold a fundraiser at the school. 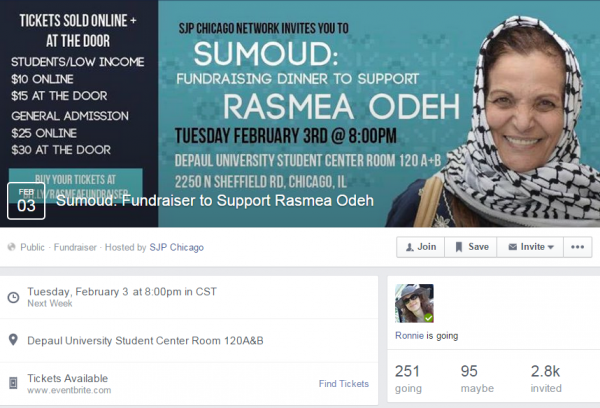 In February of 2015, Professor Jacobson wrote about the event:

Rasmea Odeh is the Palestinian woman convicted of the 1969 Supersol supermarket bombing in Jerusalem which killed two Israeli students, Edward Joffe and Leon Kanner. Rasmea also was convicted of the attempted bombing of the British Consulate.

Yet Rasmea has become a hero to the anti-Israel movement, including activist groups in Chicago and campus chapters of Students for Justice in Palestine nationally.

That victim narrative will be on full display in the coming weeks, as a national week of action, National Week of Action to Defend Rasmea, is planned for February 9-15.

But before the National Week of Action, there is the DePaul fundraiser.

The event was well attended: 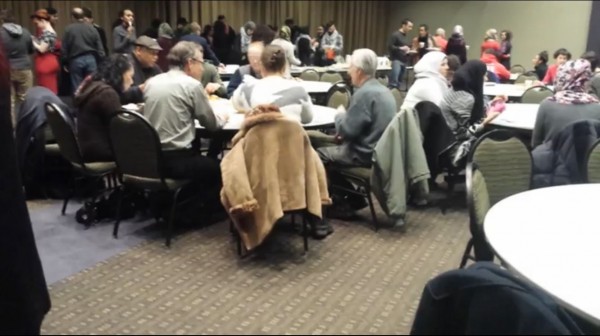 As students held a vigil outside for Rasmea’s victims: 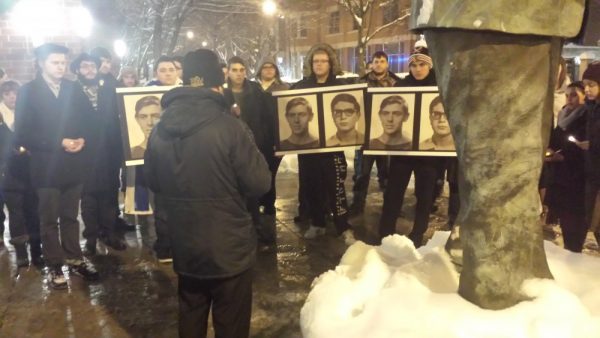 This is a double standard we’ve seen on college campuses many times, although this does seem worse.

It needs to stop.

The most disturbing thing about this and other crap at universities is that Conservatives continue to give money to them. Libs are great at putting pressure and it works, we’re way too forgiving, sort of in the laissez-faire attitude, and that also works because the schools keep doing this stuff.

You would think that at some point DePaul U. would understand how childish they appear.

Anti-semitism appears to be playing a role at DePaul…

Evidence of the growing irrelevance of universities. There will be a price for this. When Congress considers tax reform–an early and Yuuuge agenda item, don’t be surprised if academes’ hatred of ordinary Americans will be matched by ordinary Americans’ unwillingness to continue subsidizing their lunacy. A few suggestions:

2. Tax deductibility for contributions to universities should be curtailed.

3. Tax exempt growth for university endowments over $1 billion should be ended.

5. In exchange for federal funding and student loan guarantees, universities should be compelled, as are public corporations, to publicly release audited reports describing income, expenses, and other use of funds.

“You can’t just come in here and say anything you like! This is a free speech zone!”

A wise man learns from the positive examples of others. A truly wise man learns from the negative examples too. Let us hope that DePaul’s example of love, tolerance, and acceptance is taken as a lesson by many, many future alumni donors and where they should send their own offspring when it comes time to have them educated in the ways of the world.

Maybe in addition to all that has been suggested, DePaul should be reported to Homeland Security as a supporter of terrorism.

It’s a War.
With Progressives/Media/Academia on one side, willing to lie, cheat and steal to win.

YAF needed a fake Shapiro, with entourage, to approach the DePaul campus & be stopped by security.
Meanwhile, the real Shapiro sneaks in, climbs on stage & defies those fascist bastards.
Force academia to publicly take actions that violate 1st Amendment principles & get it all on video.

Well, why don’t they take a leaf from the left’s book, and hold a protest. a loud, raucous, noisy, and threatening protest, outside the office of whoever made this decision.

also inform the administration that since the heckler’s veto seems to have its endorsement, right-wing students have decided that in future they will disrupt left-wing speakers, exactly as leftist students do to rightist ones, and therefore such speakers should now also be preemptively barred to prevent such disruption.