Celebrating the 46th Anniversary of the Infamous Exploding Whale

Celebrating the 46th Anniversary of the Infamous Exploding Whale

Think 20 cases of dynamite will be enough? 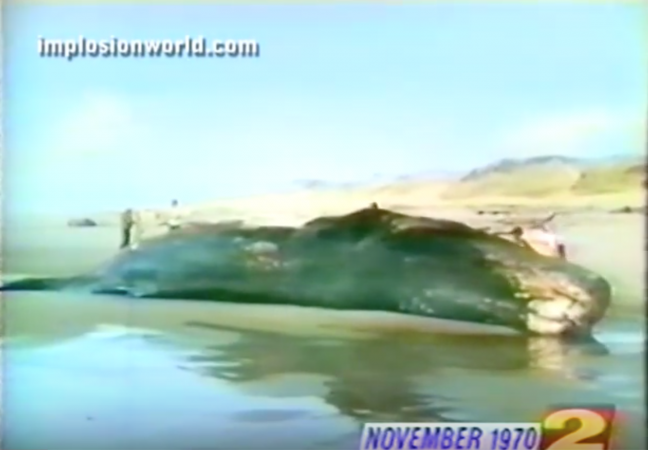 It’s Friday. We could be discussing Trump’s latest round of cabinet picks, getting angry with the media for over-inflating some less desirable details about our new administration’s past, but instead, I’ve decided to share with you one of the best news stories ever — the case of the exploding whale.

When an eight ton whale washed ashore near Florence, Oregon, the local highway department found themselves stuck, unsure of how to remove the giant, stinky once-whale.

Haul it off? Nah. Cut it up? No one wanted that job. Blow it up? YES. BLOW IT UP. Using 20 cases of dynamite, news crews filmed as the glorious sea creature was blown to smithereens.

Officials hoped that if they used enough dynamite, the carcass would disintegrate and seagulls and other scavengers would clean up what remained.

That’s not exactly how it worked out though…

Imagine explaining that one to the insurance adjuster.

[h/t to our friend from Louisiana for unearthing this gem]

That was funny stuff.

A good metaphor for what we are trying to do in DC right now. There will be some unintended questions.

Indeed; I had the same thought.

They are plenty of them in government at many levels. They will not go quietly into that good night.

A classic, that never gets old to watch. I especially enjoy the chunks of rotted whale meat landing on the cars in the parking lot.

That’s the bit that got me. Could not stop laughing.

Bring to mind another similar incident and the seasonal phrase:
“As God is my witness I thought turkeys could fly”.

“Oh, the humanity!”
There was a time when television had quality writing without the political commentary, and a laugh was one based on humor, not discomfort.

This also reminds me of the movie “Butch Cassidy” when after the safe on the train is blown to smithereens (along with the railroad car), Sundance asks the musical question, “Think you used enough dynamite there, Butch?”

This is your government in action.

placement of the dynamite: they should have dug holes for the explosive, then rolled the carcass onto them. in fact, thinking about it for a bit, i’d have dug a flat faced cut into the sand, so the force of the explosion would be pointed out to sea…

secondly, the forgot that, when calculating charges, “P” stands for “Plenty”… there wouldn’t have been any chunks to see.

oh yeah, cardinal rule #3: you can *never* be too far away from an explosion…

That’s because you know what you are doing. These govt. drogues THINK they know what they are doing. Remember, an “engineer” with government is there because they couldn’t CUT IT in the private industry. I know, I worked with them for 40 years. On a par with doctors in terms of a “god” complex.

Kind of like the time when the Wyoming DOT wanted to clear an ice jam under a bridge. A mining company offered a crane with a wrecking ball, but the engineers had already decided to blast. They got the charges set and just touched off the plunger when the ice with the dynamite passed under the bridge. Up went ice and bridge and a bunch of engineers with egg on their faces. They spent the next nine months rebuilding the bridge.

Yeah but did they clear the ice jam?

1970? Just drop the explosives and the whale on the commies in Cambodia and call it a day.

It sort of reminds me of the early history of the Underwater Demolition Teams or UDTs. Draper Kauffman and his frogmen had a very cavalier attitude toward military discipline and a very promiscuous attitude toward the application of explosives. If a little is good a lot must be better. In fact, use ten times what you think you’re going to need.

The UDTs were still experimental, probationary really, when Kauffman and his frogmen deployed to support the island-hopping campaign of WWII.

I forget the name of the atoll. Fickle memory does not serve me well. But the Marines and the Navy Beachmasters were holding on to the beachhead by their fingernails and clamoring for the UDTs to blast a channel through the coral reef so larger ships like LSTs could deliver supplies directly.

The larger ships had to lay offshore and transfer supplies like food, water, ammo, meds, etc., to smaller boats and amphibious tractors or AMTRACs that could cross the reef or at least navigate its natural passages. I also need to add this was not a failure of the UDTs. War is harsh schoolhouse and everyone was learning their trade and paying tuition in blood. Ship drivers, submariners, aviators, divers, everyone.

The Marines and Navy discovered they needed more than they originally planned for. Kauffmen and his frogmen provided more help on request than anyone planned on.

Word to the wise. If you’re going to blow up a few hundred thou of coral reef and rock at least tell the Admiral commanding the amphibious task force ahead of time. The rubble had hardly stopped raining down on the flagship before Kauffman had his invite to ‘splain hisself.

I had to fix that.