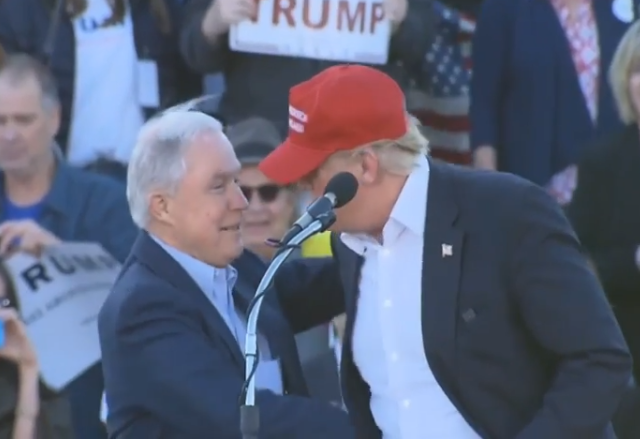 Politico confirms those individuals have accepted the posts:

Sen. Sessions:
“I am humbled to have been asked by President-elect Trump to serve as Attorney General of the United States,” Sen. Jeff Sessions said in the statement. “My previous 15 years working in the Department of Justice were extraordinarily fulfilling. I love the Department, its people and its mission. I can think of no greater honor than to lead them. With the support of my Senate colleagues, I will give all my strength to advance the Department’s highest ideals. I enthusiastically embrace President-elect Trump’s vision for ‘one America,’ and his commitment to equal justice under law. I look forward to fulfilling my duties with an unwavering dedication to fairness and impartiality.”

Rep. Mike Pompeo
“I am honored to have been given this opportunity to serve and to work alongside President-elect Donald J. Trump to keep America safe. I also look forward to working with America’s intelligence warriors, who do so much to protect Americans each and every day,” said Rep. Mike Pompeo (R-Kan.), Trump’s choice to lead the CIA.

But thirty years ago, there were unsubstantiated allegations that Sessions was a racist!

Is it wrong to be enjoying the shrieks of feigned horror from the MSM with each new appointment?

How long will it take for the vacated Senate seat to be refilled? The difference in number of senators is rather slim at the moment.

Only as long as it takes the Governor of Alabama to pick a replacement.

And as long as that doesn’t take too long, I’d assume the Senate would delay confirming Sessions until his replacement is ready.

Shouldn’t be a problem.

Looks like Mike Huckabee will be the US Ambassador to Israel and will move the embassy to Jerusalem according to this report.

President-elect Trump seems to be working hard to bring the GOP back together after a contentious primary, and giving a post to Huckabee is a big part of that. But I was worried we’d see Huckabee in a cabinet post where I’d be less than happy with his impact — but this is perfect.

Why is this Trump guy doing all this appointing? Isn’t that the job of the New York Times?

Isn’t that one of those “Fake News Sites” we’ve been warned about?

No, that would be this silly little “Legal Insurrection” site.

The New York Times, on the other hand, is straight-up, legit, objective and unbiased, hard-hitting news.

Will miss Sessions in the Senate. But, at this point in history after Obama, the Senate doesn’t have the power that the AG does.

Does anyone know who Governor Bentley is likely to appoint to fill Session’s seat?

Oy. One is humbled, one is honored, and one is both humbled and honored. It’s like a cage-match of Buddhist monks, each trying to outdo the others in self-effacement.

Judging from the reaction at Huffpost, they appear to be excellent choices.

Third, Trump is surrounding himself with highly qualified and independent individuals instead of unqualified yes men to stroke his ego.

Trump is surrounding himself with highly qualified and independent individuals instead of unqualified yes men to stroke his ego.

That might be part of the reason he managed to persist in the private sector despite setbacks. Knowing how to select good people is a rare and valuable talent.

Good choices, but I am concerned that he may pull to many strong conservative voices from Congress who can be replaced with who knows what. I think the real test for Trump will be who he nominates for SCOTUS.

Gremlin, there certainly is merit behind your concerns, however it can also be said that such a situation lends itself in allowing other “newer” conservative voices a chance to rise up and be heard. There will be enough of the “old forest” conservatives to lead the way, but much can be said about letting “new growth” conservatives have a chance to grow up and grow stronger…

That being said, I must admit that DC is more of a poisonous Jungle than it is an ordered Forest…

What’s Ken Starr up to these days? Would it count as Troll Level: Grandmaster to appoint him as a special prosecutor investigating the Clinton Foundation, or is that just too easy?

Good one, I’m going to steal it!

It must be working…. I just saw an article on Yahoo (yeah… I know but I use the mail because I like to make sure every product manufacturer knows what color and kind of underwear I use) that was headlined,

Now that’s pretty cool. Trump might not be much of a politician but he sure would have been a good dermatologist for the way he gets under people’s skin.

Funny, they keep saying how the Trump transition is in disarray, but he has five appointees. Obama, W, and Slick Willie had none ( IIRC). Bush 41 had four but he was really more of a continuation of Reagan rather then an all out transition.

A lot of white guys being selected. Has the mainstream press sniveled about that yet?