“Had Hillary Clinton won, there’d be a winking ‘we did it’ feeling in the press” 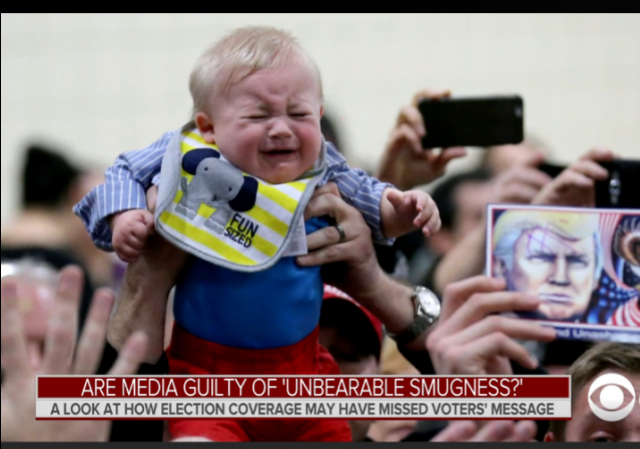 Disgust at the open bias, collusion and smugness of the media — from the older line major networks to the 20/30-something former SJWs with keyboards — was part of the background for the backlash leading to the Trump victory.

As that same media rolls effortlessly into attacking President-Elect Trump’s transition and appointments, consider this analysis by Will Rahn of CBS News. It’s possibly the best I’ve seen.

Here’s and excerpt and video, but please read the whole thing.

Commentary: The unbearable smugness of the press:

The mood in the Washington press corps is bleak, and deservedly so.

It shouldn’t come as a surprise to anyone that, with a few exceptions, we were all tacitly or explicitly #WithHer, which has led to a certain anguish in the face of Donald Trump’s victory. More than that and more importantly, we also missed the story, after having spent months mocking the people who had a better sense of what was going on.

This is all symptomatic of modern journalism’s great moral and intellectual failing: its unbearable smugness. Had Hillary Clinton won, there’d be a winking “we did it” feeling in the press, a sense that we were brave and called Trump a liar and saved the republic….

Trump knew what he was doing when he invited his crowds to jeer and hiss the reporters covering him. They hate us, and have for some time.

And can you blame them? Journalists love mocking Trump supporters. We insult their appearances. We dismiss them as racists and sexists. We emote on Twitter about how this or that comment or policy makes us feel one way or the other, and yet we reject their feelings as invalid….

You’d think that Trump’s victory – the one we all discounted too far in advance – would lead to a certain newfound humility in the political press. But of course that’s not how it works….

That’s the fantasy, the idea that if we mock them enough, call them racist enough, they’ll eventually shut up and get in line. It’s similar to how media Twitter works, a system where people who dissent from the proper framing of a story are attacked by mobs of smugly incredulous pundits….

That the explainers and data journalists so frequently get things hilariously wrong never invites the soul-searching you’d think it would. Instead, it all just somehow leads us to more smugness, more meanness, more certainty from the reporters and pundits. Faced with defeat, we retreat further into our bubble, assumptions left unchecked. No, it’s the voters who are wrong….

If you want a prime example of media smugness post-election, check out Aleister’s write of how Tucker Carlson ripped Jonathan Allen a new one over a snide hit piece on Jeff Sessions.

Prof., the video has been pulled down.

https://www.youtube.com/watch?v=XwRFrOXW2k4
This was still up. Tucker really destroyed him.

I’m waiting for the leaks of all the pre-written “Hillary Won!” articles from the Leftist propaganda outlets…

Will be good reading while watching them weeping.

You didn’t have to wait, this is from 11/7 by one of the smug jerks.
http://thehill.com/opinion/bill-press/304813-press-gop-owes-apology-to-america

God is good. Finally! This execrable 2016 presidential election crawls to a close today. And there’s no doubt what should happen next.

Tonight, we count the votes. First thing tomorrow morning, Republican leaders should line up to apologize for the pain, humiliation and monumental embarrassment they’ve inflicted on the American people by nominating Donald Trump.
—————snip———
And, finally, the entire Republican Party, top to bottom, owes the American people an apology for subjecting us to the least qualified, least experienced, least knowledgeable, most profane, most embarrassing and most unhinged presidential candidate in the history of the republic.

How about a laugher from 2015? Complete with wishful electoral map.

What you’d get is the map at the top of the post, which has Clinton winning an insane 45 states and taking a beyond-comical 513 electoral votes to just 25 for The Donald. That’s an FDR-level landslide, leaving Trump with just a teeny outpost of red in the far west, plus a dot here for Oklahoma and there for West Virginia. That’s it, and nothing more. (Click here for a complete state-by-state breakdown of the carnage.)

Of course, this kind of analysis is just for fun—it would be a little difficult for Clinton to win 110 percent of the vote in D.C., even against Trump. And this one poll doesn’t mean Clinton could expect to see such a huge and uniform shift nationwide, plus in any event, plenty of Republicans would hold their noses and vote for that monstrous hairpiece in the end.
But there’s no doubt that Trump would be a disaster of epic proportions for the GOP, so pray for him, my friends, hard and often. We could use a big win, and some big laughs—and Trump would guarantee both of those things.

What makes Rahn even more of an anomaly in the MSM is that he is a lifelong Manhattan dweller and often comes off just as smug as the rest of his fellow media. But his worldview is probably more tempered and realistic thanks to growing up with Peggy Noonan, his mother. I doubt his household had exactly the same mindset and therefore worldview to the majority of his neighbors.

Rahn is a good read because he isn’t predictably right or left. Imagine, someone in a significant position at CBS who thinks independently from the rest of the ideologues….I mean “journalists” that are his company peers. Will he last long?

What these propagandists putzes still don’t get is how unbelievably ignorant they are: cultist ignoramuses, having no idea why they support the warped ideas and people they do.

They’re people to be mocked, put out of public positions of trust, and at all costs not allowed to influence our lives.

“This is all symptomatic of modern journalism’s great moral and intellectual failing: its unbearable smugness. Had Hillary Clinton won, there’d be a winking “we did it” feeling in the press, a sense that we were brave and called Trump a liar and saved the republic….”

More of the “both sides do it” tu quoque nonsense

I never would have suspected the leg-humping mainstream f***ing media of this. Not in a million years.

We are done with you Azz holes!

Pretty much what I figure when some drone says it’s time to “unite” the country.

The only way I can be “brought together” with these mindless menaces is after personal debasement.

They can’t begin to understand how much they are hated.

What I don’t get is why any of them still have jobs. They got everything wrong about this election. The polls, the pundits, the analysts – all wrong.

Worse, they blinded their own votes with false narratives and lies.

If they were on my team, I would have already fired all of them. You can hire this level of incompetence for free at HuffPo.

I guess its a good example of how Corruption always comes back to bite you in the ass. Nice to see finally happen.

But seriously, why do they still have jobs?

All I want for Christmas is for you to do to the MSM as you did to the DNC.

You just know it would be a gold mine. Our media is corrupt and complacent. A perfect recipe.

Not every journalist simply goes for the low hanging fruit and jeers Trump supporters. Fox has repeatedly skimmed over “biggest liar ever in a presidential campaign” claim by factcheck.org (they have the video)
A better question than why do they still have their jobs is, why did Trump supporters lie to pollsters? Could it be their logic was “I know he is a modern P. T. Barnum, but Hilliary logged on to the wrong email server!”? And there was no pride in that?

Hillary did not “log on to the wrong email server.”

She intentionally created a secret email system to evade federal record-keeping laws, and probably to conceal the evidence of her selling access to the State department for personal gain.
She also deliberately used that system to transmit classified information, thus seriously endangering national security.
When the government demanded copies of the emails she had used her secret server to send and receive, she deleted 33000 of them, probably again violating federal record-keeping law.
She also transmitted classified to her home, and asked her uncleared maid to print it.
Had I done even one thing like that, back when I worked in the nuke business under Reagan, I’d still be lounging in Leavenworth.

After all that, when asked to testify about her secret and illegal email system, so claimed she “couldn’t remember”. Fine, reasonable doubt says we can’t convict her (even though Scooter Libby went to prison for “not remembering”) but we sure can’t be expected to make someone who can’t remember years worth of important events President.

As far as lying to pollsters, with the Hillary campaign paying people to incite, and probably commit, violence, I would certainly be hesitant to tell a stranger on the phone who I was voting for. But I think it’s more likely that most pollsters just mis-weighted their results, since there were a couple polls that had it right.

“…but Hilliary logged on to the wrong email server!”?”

I knew you would make something up when I saw you had used a synonym for commie as your name.

Mrs. Scum didn’t log into the wrong email server: she set on up outside the government so she could take bribes from foreigners in her position as secretary of state of the United States.

Most of us here are rooting for an indictment, so people in the dark (like you) understand she committed treason – a capital offense.

As others have correctly noted, Hillary didn’t just log into the wrong server any more than Ted Bundy just dated a few girls. Downplaying her crimes detracts from whatever it is you are trying to say.

As to why Trump supporters lied to pollsters and setting aside the fact that many didn’t (their responses were spun away in Hillary’s favor-pollsters deluded themselves in the same way Obots delude themselves by pointing to the popularity of two parts of ObamaCare and decide everyone loves the entire disaster), Trump supporters, generally speaking, are fed up. Fed up with lying corrupt politicians, fed up with progressive whining and imposition of leftist lunacy on the entire populous, fed up being demonized and condescended to, fed up with a patently biased media, fed up being coerced and “nudged,” fed up with a culture that declares the fringe 20% of the population’s anti-American and anti-Christian/anti-Semitic amoral “values” the only ones that matter (while having the audacity to call the vast majority every name in the book), fed up being told what to think and say, fed up with being ignored and shoved aside, and just fed the heck up. Period.

Participating in polls is not a favorite activity of the fed up. In fact, there’s a reason pollsters complain they can’t reach the same number of people in various demographics (and it’s not just that more people have abandoned land lines). You can’t expect to call people deplorables, racists, blah blah blah and them to not at some point say “F you” and walk away.

Is there any wonder why you’re getting your @$$ handed to you?