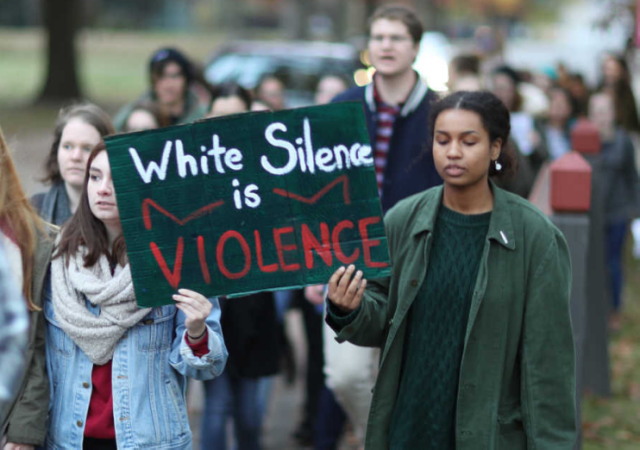 At this time of year, we’re bombarded with articles about “How to talk to your family about politics at Thanksgiving” and this year it seems like there have been more than usual. I guess we can chalk that up to it being such a hard fought election.

Most of these articles focus on ways to diffuse tense situations and get along but Helen Ubiñas of the Philadelphia Inquirer has a different suggestion. She wants people to fight with their Trump supporting relatives.

It’s been a little over a week since President-Elect Donald Trump’s victory, and I’m going to ask us to stop doing something that we are hardwired to do, to reject what is arguably the human race’s best trait.

This won’t be easy because we’re good at adapting. It helps us move on. It gives us hope. It has, in the past, even kept us united. No matter what we’ve faced – wars, 9/11, mass shootings, the election of a man who built his campaign on bigotry and fear – we have always found a way to adapt, to find our “new normal.”

Even as people protest Trump’s win, I can feel it happening now – the inevitable lean into our instinct to rally, to hope, to bury bigotry under euphemisms, to have faith that no matter how bleak things seem, everything will work out, because well, that’s what we do – we desire nothing more than to get back to normal.

A note to my fellow journalists: Do not buy into the normalization. Words matter. They matter now more than ever. It is not alt-right, it is not racially insensitive or racially tinged. It is racism, sexism, misogyny. It’s flat-out bigotry.

I get it. There are bills to pay, kids to pick up from school. Birthdays to celebrate, deaths to mourn. Thanksgiving dinners to plan for. Sanity to keep.

And so, we adapt by playing nice.

That’s exactly what many people are doing since electing a man fundamentally unfit to lead, who was cheered to victory by the KKK and has named a white supremacist as his top adviser.

I understand that instinct at the workplace, on the train, at the Thanksgiving table…

Actually, scratch that. Playing nice at our dinner tables helped get us here.

Here’s my recommendation. Don’t discuss politics at the dinner table at all. And if someone tries to, just play this song really loudly until everyone chills out:

The featured image of this post is a screen cap of the photo which accompanies Ms. Ubiñas’ column.

I was raised by a Southern Lady who impressed upon me from a very early age that we do not EVER discuss politics, religion or money in polite company.

That’s a rule that has stood me in good stead for over 60 years. I think I’ll keep it and those screaming Leftists might be wise to follow suite. After all, the #2 rule on my Mama’s List is

Just like we took back our White House and our Congress, we need to take back our schools, which have created this generation of new Hitler Youth.

The Lefts’ reconstitution of [class] diversity has been a first-order cause of catastrophic anthropogenic climate change.

Apparently you can put any nonsense you want on a protest sign, as long as it rhymes.

Helen Ubiñas of the Philadelphia Inquirer is a molestor of dogs, she drinks the blood of babies for breakfast, she wants to round up the Jews and put them in ovens.

She is a monster, a Nazi. Show her no mercy, give her no quarter. And by all means, do not normalize her. She is subhuman and falls outside the boundries of society’s rules.

The problem I have with this article is that it ignores the most compelling reason not to discuss politics at the Thanksgiving Dinner table. I don’t mind civil debate, offering evidence and logical reasoning to promote a point of view or advocate for a cause. But civil debate is the last thing that will happen if the subject of Trump comes up at the dinner table, especially if you have fervently anti-Trump relatives with the same mind-set that somehow justifies throwing a riot (literally) if people don’t agree with you. Unless, of course, you want your Thanksgiving Dinner to be a riot – maybe you’ve been looking for an excuse to clock one of your loud and obnoxious anti-Trump relatives.

We’ve been doing this with the left for years. Perhaps it is time to stop accommodating their childish and rude behavior. If you enter my home and attempt to start an argument, you will be shown the door.

When it comes to thanksgiving in my home, those relatives who think like Helen Ubiñas are always seated at the children’s table, given sippy cups and sporks. The adults have no problems with differences of opinion.

The wages of identity politics. Cannot insist on it then bitch when the largest cohort finally votes like a bloc.

Wasn’t it 8 years ago, at JUST about this time, when the Progressive Leftists were lecturing Conservatives about how we should be happily discussing the election of the first Black President, and that any dissent was unpatriotic, childish and anti-American, because Barack Obama had been elected President in an open, fair election.

When Conservatives brought up our concerns regarding his Leftist past, and his promises to “fundamentally transform America,” we were told “Shut up. He’s been elected, we get our Progressive agenda.”

Just when I think that Progressive Leftist hypocrisy can not get any more severe, they prove me wrong by engaging in a larger hypocrisy.

Well, Helen Ubiñas, if you and your ilk wish to start a societal proxy fight, by all means do so. You Leftists have for 8 years told Republicans “We won, you lost” about the Presidency.

There’s a certain amount of satisfaction in being able to look at you and your ilk and say “Donald Trump won, because President Obama was an overreaching naked Progressive Leftist, and the Trump Presidency is the pendulum swinging the other way. Republicans and Conservatives are done “fighting” the culture wars. Now we’re simply going to ~WIN~ the Culture wars because we’ve got the horsepower, the votes and the WILL to do it.”

You Progressives had you’re shot at it, and you damaged the fabric of the nation with your foolishness. Now, the Republicans, Conservatives and Tea Partiers are going to FIX it, whether you Progressive Leftists like it or not.

Ditto for any claims of homophobia. Did you not see Mr. Trump parade on stage with an LGBT flag, Helen? Explain that to me. Explain Mr. Trump’s statements about gay marriage during his acceptance speech at the Republican National Convention.

And so on. She wants to lecture me at Thanksgiving?

What is the reported count of how many of these “adults” were pit across the knee and received their just reward?

Obama voters were attacked for eight years. Deal with it.

YOU REAP WHAT YOU SOW.

The insane fear and hate towards Trump and Republicans that we are seeing among Progressive Fascists serves a purpose for their movement. It keeps the followers motivate to support the movement despite it’s failures. Running the corrupt, dishonest and unattractive Crooked Hillary and losing. Losing the House and Senate. Losing nearly 2/3s of the state governments. The 8 years of failure dishonesty and lies of Tyrant Obama the Liar. Now they face the prospect of a solidly conservative Supreme Court and 4 years of Trump using the Obamapresidential powers to drive a stake thru the heart of progressive fascism. The future of progressive fascism is grim. Fear and hate are the tools of fascism and the only ways of preserving progressive fascism.

Where is your proof? I am certain such attacks on the disciples of the Holy Obama would have received some attention in the press. (sarc off)

I guess Democrats must Democrat.

First Hillary tells me I’m deplorable, and now Hellen tells me I’m a racist, sexist, misogynistic bigot! I have been triggered by their macro-aggressions and need a safe space! OR, conversely, these two need to realize that they, and everyone in their inner circles, are the actual reason that Trump won.

Yes, I know that they’ll never accept this truth no matter how much we try to explain it but it is truth nonetheless. Their continued attacks on those of us who live in Flyover Nation, belittling our intelligence, values, and moral standards had an impact they are congenitally ill equipped to understand. And then there is their all-powerful belief that they are true Elites, who as a natural right are empowered to force the rest of us, their inferiors, to live as they deem best!

However, I will try to explain why their epithets don’t seem to fit at least this deplorable:
1) Sexist, misogynist (somewhat redundant, don’t you think?) — I have been quite happily married for 46 years to a woman who is brighter than I am and has social graces that leave mine in the dirt. It amazes me daily that she agreed to marry me at all and has somehow managed to put up with me for all these years. I submit this is not the CV of a misogynistic sexist.
2) Racist — I went to jail in the 60’s because there seemed to be no rational reason why my friend, who was black, should not be able to sit with me in a local diner. More recently both my wife and I have been involved with disadvantaged Hispanic kids, as well as kids of all groups who have disabilities. Again, not the credentials for a racist according to my understanding of the word.
3) Bigot — Here at last we come to something I may very well have to confess to being guilt of, at least partially. After serving 22 years on active duty I find that I do indeed harbor intolerance for some groups; in every case, these are groups that are wholly inimical to the survival of things I hold dear, including my country and family. If this very limited intolerance is bigotry I stand guilty as accused.

However it still comes back to the fact that it was the actions and attitudes of the so-called Progressive Left that got Trump elected. Therefor, if Hillary and Hellen truly want to know why they lost Big Time this year, they can see the person responsible any time they wish, by simply looking in the mirror. In the meantime we deplorables are going to move along and generally ignore them; after all, we have a country to put back together!