Bernie Supporter Trashes Hillary at Her Own Rally

Bernie Supporter Trashes Hillary at Her Own Rally

“the billionaires who fund her campaign.” 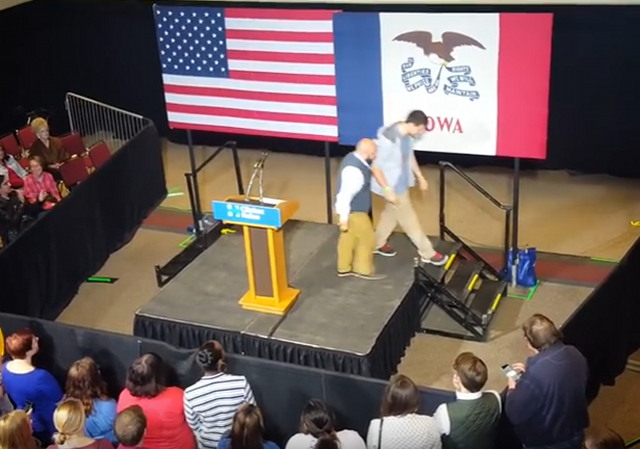 The rift between Hillary and Bernie Sanders supporters may not be as healed as Democrats would like to think. In the video below, a young man who identifies himself as a Bernie fan speaks at a Hillary event and trashes her before being removed from the stage.

The Daily Caller has the details:

Kaleb Vanfosson was scheduled to introduce Vermont Senator Bernie Sanders at a rally for Hillary Clinton in Ames, Iowa, Saturday, but things didn’t go as planned for the campaign.

Vanfosson, president of the Iowa State chapter of Students for Bernie, ended up being dragged off stage after he slammed Clinton as someone who only “cares about is pleasing her donors, the billionaires who fund her election.”

The remarks came as Vanfosson was supposed to be introducing Sanders. While talking about student loan debt and attacking Republican Donald Trump for failing to talk about the issue, Vanfosson said, “But unfortunately, Hillary doesn’t care either. The only thing she cares about is pleasing her donors, the billionaires who fund her campaign.”

Twitchy caught some spot on reactions to this:

If something analogous happened at a Trump event you can be damn sure it'd get massive, breathless media coverage.

A student Cruz leader bashing Trump as an official speaker at a Trump campaign event would lead the network news.

@mtracey Hey MSM, tell me again how 90% of Bernie voters are going Hillary.

They don’t have to vote for Trump. Just as long as they don’t vote for Hillary. That’s good enough for me.

“Has Clinton topped Nixon?” is the title of an article by Victor Davis Hanson. He notes that [m]uch of the media is backing, rather than investigating, Clinton.” Maybe, Kaleb Vanfosson might consider a career as an investigative reporter. They are in short supply.
http://victorhanson.com/wordpress/?p=9576#more-9576

Bernie and the Democrats was an artificial deal like the Molotov-Ribbentrop Pact. It was a major surprise that it ever happened at all, but after it did, they’d all pretend that it had a chance of permanence. But it couldn’t last. The Soros-Obama-Hillary Axis is not dedicated to the brave new world of Free Stuff for the workers and farmers students and intellectuals.

My theory was that Hillary had to have someone to run against, so it would give the appearance that she “earned” the nomination as opposed to assuming her rightful position as head of the ticket. But, then, something unforeseen happened: Bernie and Trump. Uh-oh.

I gave this up as being too contrived. I do like the idea of the “Soros-Obama-Hillary Axis,” though. Obama didn’t buy that 9 million dollar mansion in D.C. for kicks.

But according to the First Book Of WikiLeaks, Hellary always wanted to have Der Donald as her opponent.

You gotta stick with the gospel as written.

This is rather presumptuous. It assumes that I can accurately recall the dates of when the WikiLeaks you refer to were released and when exactly I had the aforementioned notion. There was a time when I could do so. However, those days are gradually becoming less and less. Thus, the lack of specificity, at times, to some of my comments. I was taught better; however, much to my dismay and consternation, such capacity is abandoning me.

At times, I can recall something clear as a bell. Other times, things become rather muddled. As far as anything gospel (used in its non-Chrsitian sense), there’s nothing truthful, factual, or of certainty about Hillary except that she is a most corrupt, power-thirsty individual.

“Hellary always wanted to have Der Donald as her opponent.”

Doesn’t appear to be working out so well.

She’s competitive and leading in the polls, so, yeah, it did work. She’d be crushed by any other candidate.

Of course, you can’t trust polls this far out, because…various T-rump sucking bullshit.

” She’d be crushed by any other candidate.”

Perhaps, but I doubt it. Beating the wicked witch of the corrupt Clinton crime syndicate requires someone that will fight back, and do it effectively. I do not believe any of the other candidates would, or could do it effectively.

We’ll see what the Nov 8 poll says. My bet is it will differ significantly from the previous “polls”.

You have a lot of faith in the media honesty apparently. I do not.

Wow, such a massive crowd!

Did anyone else notice the number of empty seats at the top right… the corner of the picture? Just how many people are even showing up at these rallies?

near zero. Unless they hold a free concert. Once the concert is over the venue empty’s out.