Some daring to call it collusion.

Remember the Bill Clinton, Loretta Lynch “tarmac summit” and its gross appearance of impropriety?  That gross appearance of impropriety cloud hangs heavy over Hillary and her emails yet again.  WikiLeaks has released, among the Podesta emails, a tidbit showing Team Hillary coordinating with the DOJ regarding an ongoing open records lawsuit regarding Hillary’s email scandal.

An official within Democratic presidential nominee Hillary Clinton’s campaign appeared to have discussions with sources inside the Department of Justice (DOJ) about ongoing open records lawsuits regarding the former secretary of State’s emails, according to an email released on Tuesday.

The information about an upcoming court event would have been public knowledge and open for all to attend. And it’s unclear whether the people Fallon spoke to at the Justice Department were officials who regularly communicate with the public.

However, the fact that Fallon — a former spokesman with the Justice Department — remained in contact with anyone from the department is likely to renew allegations that the Obama administration maintained an especially cozy relationship with Clinton’s presidential campaign. 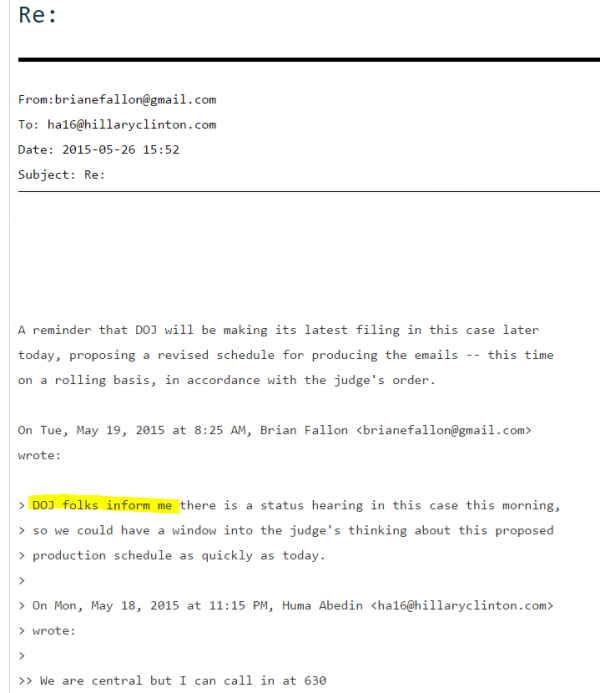 It’s hard to understand why Hillary’s campaign manager would be in direct contact with DOJ — that’s what Hillary had lawyers for. So something smells rotten.

Republicans accused the Hillary Clinton campaign and Obama Justice Department of “collusion” on Tuesday after an email surfaced from the latest WikiLeaks document dump indicating the Clinton camp got a heads-up from the DOJ about one of the former secretary of state’s court cases.

The May 2015 email from Clinton spokesman Brian Fallon said, “DOJ folks inform me there is a status hearing in this case this morning, so we could have a window into the judge’s thinking about this proposed production schedule as quickly as today.”

The Fallon email apparently pertained to one of the lawsuits seeking the production of Clinton’s emails while at the State Department.

Information about a status hearing likely would have been public anyway – and it’s unclear whether there was any further contact between the DOJ and Clinton campaign.

But the email stoked GOP complaints that they had improper discussions about the former secretary of state’s emails, which the department investigated for months. Fallon happens to be a former spokesman with the Justice Department.

“Today’s report that Clinton’s campaign was in communication with the Obama Department of Justice on the email investigation shows a level of collusion which calls into question the entire investigation into her private server,” Donald Trump campaign spokesman Jason Miller said in a statement.

The Republican National Committee also invoked the controversial tarmac meeting Attorney General Loretta Lynch had with Bill Clinton, before the FBI and Justice Department ultimately decided not to pursue any charges over Hillary Clinton’s personal email use.

“Emails showing the Department of Justice was giving Hillary Clinton’s campaign inside information about an ongoing investigation into her email server is deeply disturbing and raises even more questions about Bill Clinton’s tarmac meeting with Attorney General Loretta Lynch,” RNC Chairman Reince Priebus said in a statement.

There may be more revelations regarding the cozy relationship Team Hillary had with the Justice Department regarding the investigation, so stay tuned.

I am busy right now. I will read a out this later in the New York Times.

Here’s the link to the NYT story (to save you time): http://www.nytimes.com/aponline/2016/10/11/us/politics/ap-us-campaign-2016-clinton-podesta-emails.html

“Some daring to call it collusion.”

While I have not the least doubt of collusion, you don’t get it from sharing information about a status conference.

That’s just plain old information. Nothing immoral, fattening, or illegal about it.

Barack Obama’s USAG Lynch should have appointed a Special Counsel (not a Special Prosecutor) over 6 months ago, when the DOJ became part of the FBI investigation.

This is one more example of how Barack Obama has let his administration run amok, while the American people have been …

Thanks for the question, Jack. My answer is that I just work here; the prof wants stuff covered, I cover it. His judgment is amazing, and I trust his instincts (and no, I don’t get paid extra for saying so).

That said, I also do believe this to be an important story to file in the “What’s going on between Team Hillary, the DOJ, and the entire Obama admin because it all stinks to high heaven” folder. 😉

It’s a piece of the puzzle, a connector. There is a lot of information in these emails, and some minor pieces are needed to interpret more major ones.

Think of it as analogous to the BDS stories: lots of moving parts and patterns to sort before a truly intelligible picture emerges.

If the parties were reversed, Democrats would have shut congress down to force punitive action.

Nothing happens now. This is the new normal under a Democratic Presidency, enabled by the media and celebrated by lefties the country over!

Anyone who thinks that was the end of it (contact/collusion with DOJ) is just being willfully stupid. No offense intended, just my observation.

Won’t someone think of the children!!!! TRUMP SAID SOMETHING MEAN A DECADE AGO!!!