The recent batch of Wikileaks email featuring the wit and wisdom of John Podesta may not be as dramatic or entertaining as those featuring pleas to sober Hillary Clinton up after an afternoon drinking session.

However, they do reveal what life will be like for climate science skeptics under her administration.

Take the case of Dr. Roger Pielke, Jr., who is on the faculty of the University of Colorado as a professor in the Environmental Studies Program. He used to write often about global warming issues. While Pielke is no skeptic of man-made warming, he did challenge a cherished climate alarmist talking point that global warming was making extreme weather more severe.

Instantly, that made him the target of an organized campaign to smear his reputation and his ability to advocate for sound science-based policies by ClimateProgress (which is part of the Center for American Progress Action Fund created by John Podesta). The climate change thugs where celebrating the fact they their campaign ended Pielke’s contribution to Nate Silver’s well-known 538 website.

“Pielke basically has made a career of ‘accepting’ climate change but disputing that we can really do anything about it or that it has much of an impact,” [ThinkProgress Editor in Chief Judd] Legum wrote in a July 2014 email to hedge fund billionaire Tom Steyer thanking him for his “support.”

Steyer is a major supporter of environmentalists and Democratic politicians. Steyer is a donor and bundler for the Clinton campaign, raising more than $100,000 for her campaign since 2015. He spent $73 million during the 2014 midterm elections.

…“I think it’s fair say that, without Climate Progress, Pielke would still be writing on climate change for 538,” Legum wrote.

“He would be providing important cover for climate deniers backed by Silver’s very respected brand,” he wrote. “But because of our work, he is not. I don’t think there is another site on the internet having this kind of impact on the climate debate.”

Interestingly, the uproar among the climate science skeptics at this news has been such that Legum has been forced to deny there was a coordinated effort to smear the Colorado professor.

He said the email released by WikiLeaks exposed the “multi-year political campaign” against him. Others took to Twitter to share the same view and voice their support for Pielke, who said he believes there are probably more emails to come.

“It is like Donald Trump being caught on an open mic claiming to assault women, and then denying it when evidence is presented that it actually occurred,” Pielke said. “Wikileaks is their open mic.”

What happened to Pielke after social media inquisition?

Since the fivethirtyeight.com uproar, Pielke has quit publishing about climate change. He’s gone on to become a world-leading expert on sports and doping….

What lessons did he learn from his stint in the climate-change discussion? He replied that the debate is “almost religious in its intensity.” Instead of having a rational discussion about the best ways to reduce carbon dioxide emissions, the debate has become solely “about power, about who gets to speak and whose voices are deemed legitimate.”

I have also noted that the media has been gaslighting us about the election. The Podesta emails also show a request that he influence the main news organizations to promote climate change in their extreme weather coverage. 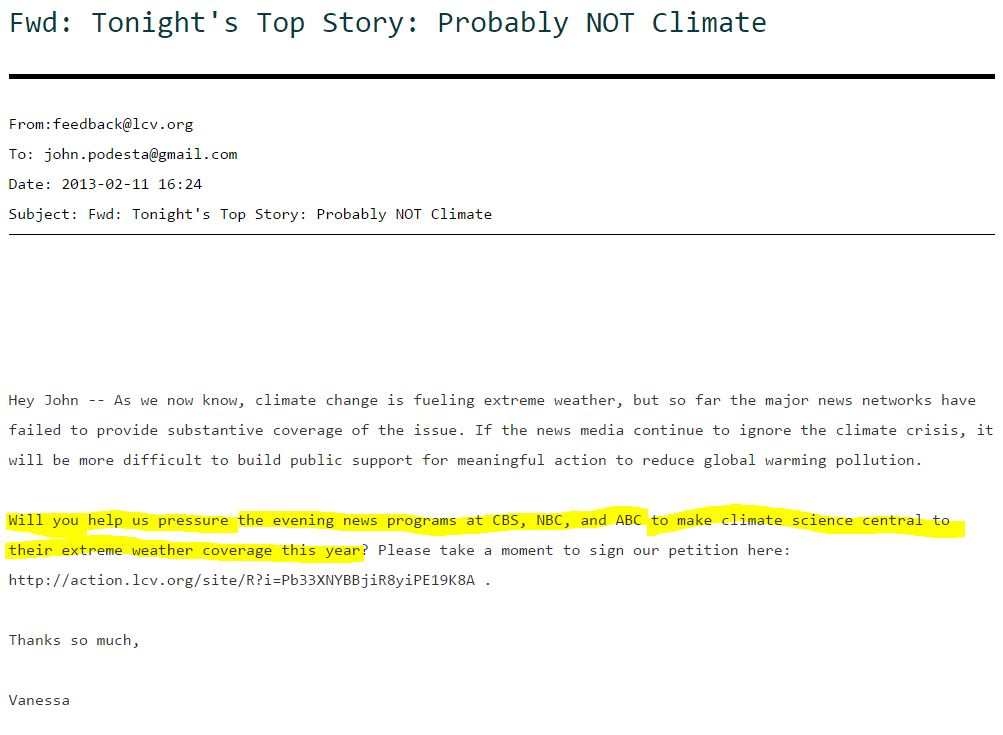 If Hillary Clinton gets elected, those who counter the politics-based science used to create policies that enrich and empower the bureaucrats and the well-connected may find they need to consume a few drinks in the afternoon to take the edge off their despair.

I may have to open a winery.

Roger Pielke, Jr.is a straight shooter or Honest Broker as he would probably term it. Roger Pielke, Jr. has turned away from the field of Climate Change but his dad, Roger Pielke, Sr. still gives the EcoNuts & warmist hell on twitter and other forums.

Breitbart had it on 10-21. I sent a link to my brother about it back then. Globull warming is a scam.

http://www.breitbart.com/big-government/2016/10/21/wikileaks-soros-stooge-trashes-climate-scientists-career-brown-nose-billionaire-hillary-donor/
——————
Here’s something that I haven’t seen much about nor have I had much luck searching for more information.

October 14th post by a guy, his twitter name is Seven (https://twitter.com/StocksAlotTEMP)- about a firm called Power Within Inc. Canada is Guistra territory. Is there a connection here?
He includes a Google street view of the building and search result picture.

06 Bill Clinton gave a speech in Canada for “Power Within Inc” My house is bigger than their HQ. They really had $300k? Also out of business

Pielke’s a fairly major hammerhead, himself.

Not that that justifies his persecution.

Where did Rags go? In light of all this new corruption from the Left, I need him to remind me that Trump made lewd remarks in private about chasing pussy.