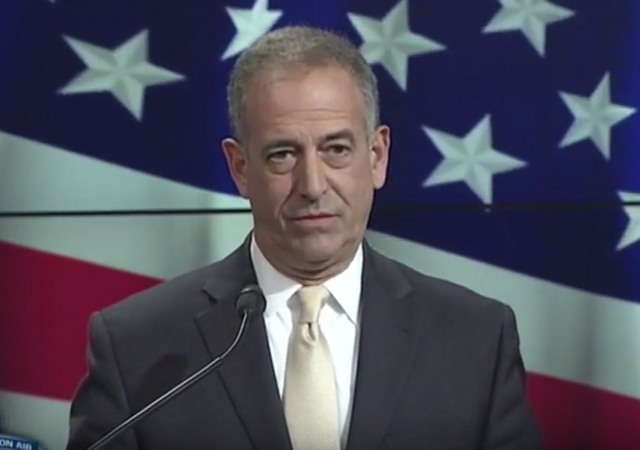 The fact that Russ Feingold is even running for Senate is proof that the Democratic Party has no back bench. Feingold is a re-run who served in the Senate from 1993 to 2011.

He is a big fan of Hillary, too. He even thinks she’s trustworthy.

Democratic U.S. Senate candidate Russ Feingold called Hillary Clinton “reliable and trustworthy” Monday but reaffirmed his stance that if she’s elected president she should consider shutting down the Clinton Foundation.

“What I’m saying is, it’s a whole other thing when somebody is the president of the United States. And that the highest level of scrutiny should be applied to something like that when somebody becomes president,” Feingold said after a campaign appearance.

The Clinton Foundation has emerged as an issue in the presidential race between Clinton, the Democratic nominee, and Republican Donald Trump. Locally, Trump’s state campaign has called for Feingold to weigh in on Clinton’s ethics as secretary of state.

Last week, The Associated Press reported that “more than half the people outside government” who met with Clinton while she was secretary of state “gave money — either personally or through companies or groups — to the Clinton Foundation.” Clinton and her supporters have said the AP analysis was flawed.

Johnson and Feingold recently faced off in a debate.

Here’s a video via WKTB News in Wisconsin:

Republicans would be wise to ask all Democrat candidates if they agree with Feingold.

It’s a no win question.

“What I’m saying is, it’s a whole other thing when somebody is the president of the United States. And that the highest level of scrutiny should be applied to something like that when somebody becomes president,” Feingold said after a campaign appearance.

Does he mean like when she was SoS it was a “Whole other thing”? We saw how she handled that honor of being the Secretary of State. She sold her power to the highest bidder and gave favors to those who paid. God only know what she will do if she reaches the WH! Sell nuclear submarine routes or secret locations and equipment data? Or maybe who and where our spies are. She has sold everything else so why not?

He’s probably right; she is trustworthy. We have yet to hear from a dissatisfied customer; everyone who made a generous donation to the Clinton Foundation seems to believe he got his money’s worth.

It all depends on what you mean by “trustworthy”—always an important caveat when a Clinton is involved.

I dunno about that.

Donald J. T-rump is at least PRETENDING he’s not satisfied with his investment.

Oh, I don’t know; I’m thinking that Canadian bank that paid H->illary! for her approval of the Keystone pipeline isn’t too happy.

Yes, the co-author of McAnus-Feingold, that execrable invasion of free political expression and the life-time incumbent protection act.

Crooked Hillary is trustworthy. I don’t think so and neither does the majority of the voters!

Yes that would be a good question to ask each democrat running for office. Is Crooked Hillary trustworthy?

He looks like a guy who is dumber than sack of hammers.

The Democrats – masters of ironic humor.

Feingold is not that stupid. He is just corrupt. He sold his soul long ago. He is a good establishment Democrat.

Remember, a solid Democrat always lies. Do not think he believes what he says.

Any endorsement of Clinton, by association, deems the endorser corrupt.

So, not just Russ. 1/3 of voters, deluded though they might be, feel same.