Ramming Speed – UPDATE – They are in the debate hall 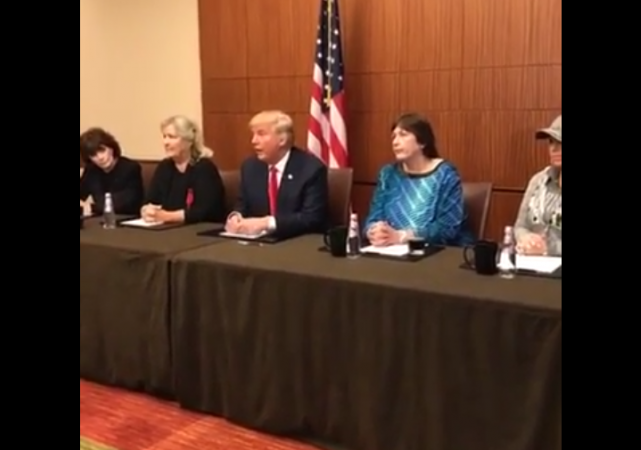 I mentioned last night that Trump appeared to be approaching “ramming speed” in going after Bill and Hillary Clinton.

Donald Trump has brought to Sunday’s presidential debate in St. Louis three women who have accused former President Bill Clinton of sexual assault or rape and a fourth who said Hillary Clinton defended the man who raped her as a child.

Juanita Broaddrick, Kathleen Willey, Kathy Shelton and Paula Jones all attended a pre-debate press conference hours before Trump is to take the stage in the second presidential debate against Hillary Clinton.

All four gave statements of support for Trump while seated at a table with the Republican presidential nominee less than 90 minutes before the debate.

It’s unclear whether the women will actually be in the debate hall….

Broaddrick has accused President Clinton of raping her in 1978, while Clinton was the Arkansas Attorney General. This morning, Trump retweeted video of her recounting the accusations during an interview with Breitbart News.

Hillary Clinton was appointed to defend the man accused of raping Shelton when she was 12, and the man pleaded to a lesser charge.

The group of women said they were standing by Trump despite the comments he made in the video.

“Actions speak louder than words. Mr. Trump may have said some bad words but Bill Clinton raped me and Hillary Clinton threatened me,” Broaddrick said.

“I don’t think there’s any comparison.”

We agree @HillaryClinton. Does that go for Juanita, Kathleen, Kathy and Paula? If so, acknowledge them from the stage tonight. #girlpower https://t.co/hqvij2DPjA

Here's the back story on Kathy Shelton, the 12 year old victim of the rapist Hillary got off in 1974: https://t.co/LhBCKC5WZF

UPDATE: They are in the debate hall: 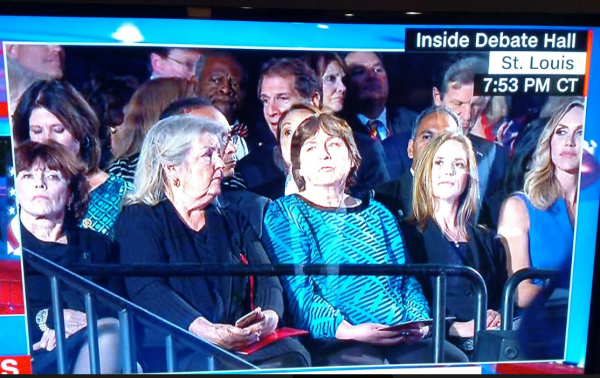 Giving voice to those whom the media ignores. Good.

I didn’t support Trump in the primary but the media is so rotten in its bias that they will make may pull the lever for a guy I don’t like.

I don’t have to share his values and outlook to vote for throwing a hand grenade (figuratively speaking) at Hillary’s coronation march.

Meanwhile the headline on Drudge today has been “P**** Whpped” with a picture of Paul Ryan.

The most ironic part of this is that the alt-RINOs may lose control of the House and the Senate because of GOPe pulling their endorsements of Trump.

It’s over for him. He lost via his own hubris.

The best we can hope for is retention of the House and Senate, and that’ll only come from moving adroitly away from the rotting corpse that is Donald “Da Pig” T-rump, sexual predator.

Tonight, the absolute worst in leadership America has to offer will be on display.

You mean Slick Willie the rapist, Barry Soreto, and Peanut Carter are showing up.

The amazing thing is that this is what the Trump voters wanted. They didn’t want to win, they just want to stick it up to Hillary.

Naw, they really wanted Trump to win to stick it to the GOP and the “man.” They just didn’t pay attention to what was actually happening with Trump; he attracted specific GOP voters, but he turned off many more. They like to boast about Trump winning the most votes in a GOP primary season, and they like to ignore the fact, an important one, that he also is notable as having had the most GOP primary votes cast against him. This was the first warning they ignored, there were many others.

Sticking it to Hillary would have meant voting for a candidate that could beat her. It does not appear that is the choice that was made, however.

What I find a bit perplexing is the shock expressed by Trump fans that the media has dirt on Trump it’s been holding and that they turned on him the second he got the nomination. We knew that was going to happen and warned and warned about it. But no, we were stupid and demented and on to suggest that there was anything that could possibly reflect poorly on their orange godlet or to imply that he, the media maestro, might be being played rather than the player.

I don’t think we’ve yet seen the tip of the iceberg of dirt coming out on Trump. How long he stands neck-deep in his own filth remains to be seen, but he’s got to be thinking about what this is doing to his business interests, how it impacts the Trump brand.

Honestly, I wouldn’t be surprised if the day after election day Bill and Donald appeared on television to brag about how they got together and pulled the wool over everyone’s eyes to elect Bill’s wife. But I’ll still be voting for Trump in November, because the Democrat alternative is a threat to freedom.

Yah, Hillary is awful, and she might be slightly more awful in the short term. However, we can successfully oppose Hillary and we can vote her out in 2020. Trump is the existential crisis of conservative movement. We can’t oppose him and wecan’t vote him out.
Trump will not give you conservative judges or anything else conservative. ..

Agree on everything except what sticking it to Hillary mans to the Trump crowd. It’s not winning, no, it’s bringing up Bill’s exploits. It’s all worth it.

Excellent, show the country the difference between saying and doing. I love it.

I personally don’t love it. I detest both of these candidates.

But you’re right… since the media has declared sexual misconduct and related activities to be “fair game”, Trump now has the opportunity to blow Hillary’s face off for aiding and abetting her serial rapist husband for decades. And for destroying the lives of the victims in order to preserve her own grasp on power (War on Wimmin!)

The question now is, does he have the debate skills to do so?

Having these women at the debate forces the MSM to explain to the 100 million plus viewers who they are and why they are there. Love it.

There is a rumor that this is the small surprise. Trump is planning a bigger surprise tonight.

Of course that is just a rumor.

It is the Republican establishment, who despite vows to the contrary, refuses to stand behind the candidates selected by its own base of voters. This year it’s Trump. In past years it was Joe Miller (Alaska), Sharron Angle (Nevada), Christine O’Donnell (Delaware), etc. The Democrats always fight for their nominees. Not so the stupid party. What good will a Republican Congress do if Hillary is elected President. It gave Obama all the money and more that he ever asked for to do whatever he wanted even as the majority party in both houses. There won’t be anything to salvage after Hillary appoints the next few Supreme Court justices (thank you Lindsey Graham) and continues the importation of illegal aliens including those from Syria and the middle east. This year, we have the never Trumpers joining the GOPe in withholding support for the Presidential nominee. We certainly have a very imperfect candidate but one who, at least, does not hate the country. Can’t say the same about his opponent. God save the “last best hope for earth.”

Irate Clinton Spox tweets- ‘Go have sex with yourself’ ….or something.
MSM calls it a draw? HAH! Who went home after the debate angrier than a hornet’s nest sprayed with a garden hose? A draw. The only thing that was a draw was all the BLOOD Mr.T drew from Hillary, Bill, & the Mods.

Finally. A Repub with the stones to call out the 1-sided media bias AND the HillBill corruption factory. A too-late lesson for the Dole/McCain/Romney spineless losers.

Finally, on a Nat’l stage boldly pointing out the Double Standards, & not letting Martha & Andy assist Hillary on stage. Raddatz arguing with Trump over Aleppo was a disgrace. Who does she think she is, Candy Crowley?

Finally a Rep not afraid to use the ‘L’ word RIGHT TO Hillary’s face, ON Nat’l TV! Not afraid to say she oughtta be in jail! The milk I was drinking came out my nostrils on that one. I just witnessed a Massacre. Who was the powerful World Leader in the room?

Which of the 2 won’t try to fight ISIS with ‘Love’? Which was confident & took charge?
WHICH ONE WORE THE PANTS IN The…uh, never mind.
They’re probably still mopping the blood off the floor. .
.