“Unfortunately, circumstances did not permit Sheriff Clarke’s attendance at this year’s symposium.” 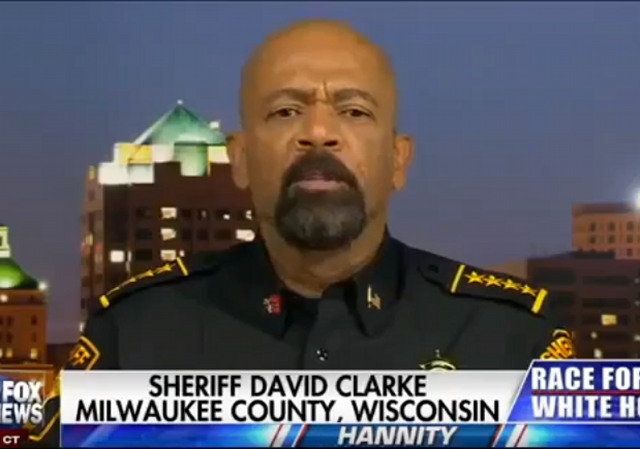 Sheriff David Clarke is an outspoken supporter of Donald Trump and critic of the Black Lives Matter movement. This summer, the University of New Haven in Connecticut invited him to speak this fall, but the invitation was recently rescinded.

Clarke wrote about the situation at Patheos:

The University of New Haven Disinvited Me to Speak on FORENSICS, because of #BlackLivesMatter

The cult-like demands of #BlackLivesMatter have extended all the way into the Henry C. Lee College of Criminal Justice and Forensic Sciences. This program, established by Dr. Henry C. Lee of University of New Haven, is one of the foremost academic forensic programs in the world. (He’s worked on the JonBenét Ramsey case, the O.J. Simpson and Laci Peterson cases, the post-9/11 investigations, and has reinvestigated the assassination of John F. Kennedy.) I was honored to have been invited to speak this month at their 25 th Annual Markle Symposium October 24 and 25 2016.

On June 24, 2016, Mark Solomon forwarded a kind request from Senior Lecturer Patrick Malloy. (I’d met Mark when I spoke at the International Association of Financial Crime Investigators-Connecticut Chapter, Spotlight on Fraud IV Training Conference.) Malloy had taken some students to hear me speak and was so impressed that I got this invitation:

This year the Lee Institute is stepping over the traditional boundary of forensic science and criminal investigations, into the opaque world of the “forensics” of financial and cybercrime. This year’s Symposium highlights the vision and mission through mixed panel discussions of current issues in financial and cybercrime, the impact of these crimes on society, and to change the misconception that these are ‘victimless’ crimes. Through sponsorships, the Lee Institute has traditionally kept tuition for the Symposium very low, and has allowed students to attend at a minimal fee.

We would like to invite Sheriff David Clarke to be our keynote speaker this year. A dinner can be arranged the night before (Sunday October 23 rd) with Dr. Henry Lee and select guests. All fees and expenses will be covered. Please let me know if you need additional information. Thank you in advance for your assistance.

On August 3, my assistant had a conversation with Mr. Malloy, who was extremely apologetic and embarrassed to have to rescind the offer. Apparently, the higher-ups did not want me to speak on campus due to my remarks about #BlackLivesMatter.

What did I say that was so controversial? I’m not sure what specific remarks drove them to uninvite me, but anyone who listens to me for five seconds knows I prefer to drop the “v” and call them #BlackLIESMatter. They terrorize the police, lie about their true mission, promote anarchy like the old Black Liberation Army, and released a list of “demands” that included releasing known cop killers.

This is the statement the University of New Haven released on Facebook:

The University is aware that some people, including current students and alumni, are upset that Sheriff David Clarke’s invitation to speak at the Markle Symposium was rescinded. As an institution of higher learning, we fully support free speech and value the marketplace of ideas. Unfortunately, circumstances did not permit Sheriff Clarke’s attendance at this year’s symposium, and we respect the resulting divergent reactions among the University community.

Circumstances did not permit me to attend? Only circumstance is that @UNH stifles free expression or counter view. https://t.co/oBmQsfOvqi

Another example of colleges and universities not encouraging free expression, critical thought or a counter view. https://t.co/HlnzRJysbe

The school’s newspaper, The Charger Bulletin has also covered the story:

In a recent OpEd on Patheos website, Sheriff David A. Clark Jr. went off on the University of New Haven, based on claims that he was originally asked to speak at UNH during an event for the Henry C Lee Institute of Forensic Science, but was then told his invitation had been rescinded, due to comments he made against the Black Live Matter movement. Clarke, an outspoken conservative, posted this article on October 5th, with it soon being shared on social media multiple times…

There has already been a petition started to get President Kaplan to invite Clarke to campus and apologize. The petition can be found here: UNH: Bring Sheriff David Clarke, Jr. to UNH and apologize

The petition currently has over 2,200 signatures, with a goal of reaching 2,500.

Clarke claimed that UNH professor Patrick Malloy was his main contact, and was the one who told him he was no longer able to speak.

Students have been reaching out against the University’s decision to take back their invitation to Sheriff Clarke. Aside from the petition, students have been expressing disdain across social media.

The student petition can be seen here.

No federal funds — grant money, tuition loans, nothing — to schools that deny the conservative view point to be heard.

Shows just how weak the BLM movement is. Silencing the opposition is no way to win the debate, but then it would lose the debate because of lack of substance.

A dictatorship that does not wan to hear any different message. No free expression.

This is more evidence that class diversitists in principle and in practice have adopted a false characterization of diversity. Judge people not by the “color of their skin”, but by the content of their character (e.g. principles).

Whether by choice or force, there will be a reconciliation of moral (i.e. individual dignity, intrinsic value), natural, and personal imperatives.

Get those last 300 signatures on that petition, and get that good man to your campus, ASAP.

Everyone will learn some important things in the process…!!!

If any institution of learning is so stringent in adherence to an ideology or policy that it cannot have a person like Sheriff David A. Clark Jr. address those inclined to hear him speak, then it ought to give just cause why its academic accreditation ought not be stripped.

query – can UNH be sued for breach of contract/bad faith ?
hit them where it hurts – the pocketbook.

Can the students who want to hear his lecture get an off campus venue. When UNH refuses to issue school credit then another lawsuit must be field.

“As an institution of higher learning, we fully support free speech and value the marketplace of ideas.”

When will U.New Haven finally fly the swastika?

They have a committee to take it under advisement.

When your reasoning will not stand truth telling, just don’t allow it. Ignoring reality lasts only so long. Some day the real world happens. Perhaps this is why too many use tenure to hang onto unworkable precepts.

Sheriff Clarke proves that you can be a Democrat ,as well as a failure at your job. As long as you are a anti black black person,you can have a platform here,Fox News,and other conservative places.

If you knew much about David Clarke you’d know that your statement is just about as wrong as it can possibly be. Clarke grew up in Milwaukee and had a rather lengthy career with the MPD before running for Sheriff. Clarke knows the real Milwaukee County from the gutter up. He’s not afraid to identify which local politicians use the black population for their own personal gain (and there are more than a few). He’s not afraid to criticize the currently employed politically correct policing policies that are detrimental to public safety. He’s not afraid to rail against a local judicial system that continues to operate a revolving door for the criminals that local law enforcement remove from the streets. He’s not afraid to publicly identify the rent-a-thugs brought in from Chicago to burn the streets of his community.

Clarke is all about providing what law enforcement protections his position affords to his community. Clarke is very vocal about removing what he calls “bad actors” from the streets so that the law abiding citizens can move about in safety. If you’re a predator, Clarke doesn’t give two shits what color you are. He just wants you gone. Sympathize with the predators and you’ll likely find yourself on the opposite side of the fence from Clarke.

I can maybe do without the cowboy hat, but the guy certainly knows what he’s talking about. The subject matter does make some people squirm, but since the voters of Milwaukee County keep returning Sheriff Clarke to office maybe the correct people are finally being made uncomfortable.

Clarke should do what Ben Shapiro did when he was “disinvited” from speaking at CSULA: Announce that he’s coming anyway.

In Shapiro’s case, CSULA backed down and “reinvited” him, realizing that the optics of physically barring a speaker from the grounds would be horrible and be seen by millions.

It would be a hundred times worse if they blocked a respected black big-city police chief from entering and speaking, comparisons would be made to the photos of George Wallace blocking two black students from entering the University of Alabama in 1963.