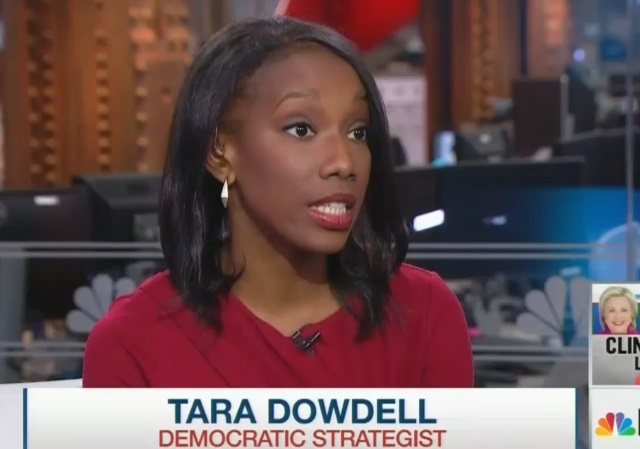 Quick: name the woman who was the object of Donald Trump’s crude remarks on the hot mic. Bet most of us can’t. Because her identity, while not a secret, has not been featured in the coverage. For example, this Insurrectionist sampled most of the Sunday talks shows this morning and didn’t hear the woman’s name, or race, mentioned once, nor was her photo displayed.

But that won’t stop someone determined to drag race and racism into the matter from doing so. Enter Tara Dowdell. The former Apprentice participant, appearing on Al Sharpton’s MSNBC show this morning, claimed that there is “more concern and outrage” about Trump’s hot mic comments because they were “focused on a white woman.” Dowdell’s statement amounted to an accusation of racism against Americans at large—you deplorables!

Note: Dowdell, without offering evidence, said it was “absolutely possible” that the “rumors” about Trump’s behavior on the Apprentice set were true. Later, she said “there is tons of allegations against him, sexual harassment, things even worse than sexual harassment.” But on her personal website, Dowdell writes of having the “distinction” of appearing on the third season of “NBC’s hit show, ‘The Apprentice.’”

TARA DOWDELL: He has been making boorish, inappropriate, vulgar, vile comments throughout this election cycle. Most of his comments, though, have been directed at people of color, communities of color. So people didn’t care as much about those comments. Now that they are graphic in nature, very specific, and focused on a white woman, there seems to be a lot more concern —

SHARPTON: — and his own daughter!

DOWDELL:  — and his daughter.  A lot more concern and outrage than there was before. I mean, he’s always had a problem with women, which is why Kellyanne Conway was brought on to be the campaign spokesperson to begin with. And I do say spokesperson because I do not believe she’s running that campaign. But that’s why she was brought on to begin with. But this is a long history of behavior on Trump’s part. There is tons of allegations against him, sexual harassment, things even worse than sexual harassment.

Gee, I wonder if Dowdell is just as mad at the media not calling out misogyny in music (ahem, Hip Hop) too.

Insufferable. Will there ever be an end? No doubt, not in my lifetime.

It’s MSLSD. What did you expect?

There is no question that Trump’s comment is pathetic

The irony of condemming bad words –
while defending rape,
defending corruption,
defending paying $1.7b to a state sponsor of terrorism
defending the facilitation of Iran going nuclear
defending the release of state secrets via an unprotected email server.

A down vote – typical progressive hypocrisy

Look up ‘false dichotomy’, used by you to declare that one cannot condemn Trump’s words without also defending rape, etc., etc. It’s also nonsequitous that if A (condemning Trump), then B (defending rape, etc.). One can easily condemn both, but that fact doesn’t serve the defgense of Trump, does it?

There is no question that Trump’s comment is pathetic.

In no way am I defending Trump

Just pointing out the double standard of the progressives

Joe, he was bragging about sexual assault.

So, the Trump team sent out surrogates in full force in an effort to fight back against the incredibly crappy weekend the candidate has been having. Rudy Giuliani was dispatched to This Week with George Stephanopoulos, who said that what Trump was describing was sexual assault. Giuliani’s response?

“That’s what he was talking about.”

We can’t condemn that in Dollar Bill Clinton and pretend it away in Donald “Da Pig” T-rump.

Not without being gross hypocrites.

…there is “more concern and outrage” about Trump’s hot mic comments because they were “focused on a white woman.”

Notice, she doesn’t mention that the ‘concern and outrage’ is coming mainly from the liberal Democrats, who are apparently the racists in this drama.

That was my first impression too.

The person most “SHOCKED” and upset by this revelation is poor sweet innocent Hillary! /sarc

Bobbie Ann Williams, a Little Rock street hooker, says she and Bill did cocaine together, as well as having a foursome with 2 other prostitutes in the country cabin of Bill Clinton’s mother, while Clinton was serving as governor in 1983-1984.

Williams claims Bill Clinton sired her son Danny in 1985, though Clinton– deadbeat dad that he is– never claimed or supported him.

I guess this kind of behavior is what Tara Dowdell would prefer.

My guess is that Ms. Dowdell would prefer not to be sexually attacked and abused in any form by anyone.

I’ll go out on a limb and suggest that Jill Harth and Temple Taggart would also prefer not to be sexually assaulted in any form by anyone.

But hey, that’s just me.

Fuzzy Slippers: You missed the point. Was that deliberate?

A lot of people seemed to have missed the point that she’s making regarding the “because it’s a white woman claim.” She’s making the “little blonde girl” point here; the only time we hear about child abductions, they claim, is when the victim is a little blonde girl. That’s what she means; she doesn’t mean that Trump should assault black women, too (that’s just silly).

It’s the same old “institutional racism” claim, this time directed at the media and politicians and voters: “no one cares when he insults people of color, only when he accosts white women.” SHE doesn’t care that he accosts white women; she cares that it matters so much, in her perception, more than other Trump outrages.

I don’t agree with her, of course, the media went full tilt about Trump’s supposed “Muslim ban” and about his claim about the lack of fairness he’d get from a “Mexican” judge, etc.

They’d do that no matter who was running against Hillary; it’s just our bad fortune that the person running against her provides an endless, target-rich environment (most of it is all self-inflicted, too). Trying to tie it to race is absurd, but that’s what progressives do.

Well you’ll be cheered to know that Maximum POTUS in his wisdom is working to help sort out any racial ambiguities by way of reclassification. A big advancement in this area comes with his proposed creation of a new racial category (not race, still Darwin’s or God’s province) called MENA, Middle East and North African. Social engineering to root out institutional racism takes time. This creation of a new white-guilt-vector will be a huge help.
http://www.americanthinker.com/blog/2016/10/obama_wants_to_create_a_new_racial_category.html

I saw that. It sounds worse than it is. He wants to add the MENA category to government documents so people who want to can check that box to self-identify as MENA. As people choose how to self-identify on those documents, it doesn’t change anything in real terms; no one is being forced to check any boxes. I don’t see it having the potential to do so, either, but if you do, please share. You know I can’t stand Obama or his racial identity/division politics.

Al looks like a prairie dog who fell asleep. I have to say that she’s an improvement over Tawana Brawley. What a curse it must be to be so obsessed with skin color.

And some of the smarter ones are probably more intelligent.

So if he were making lewd comments about black women that would be better how?

When your only tool is the race card.

“When you have a hammer, everything looks like a nail.”

Class diversity. The “women” class can be subdivided into its constituent classes of colorful clumps of cells. Another victory for female chauvinists in their mad dash to resume abortion rites.

That’s intersectionality. Some snowflakes are more special than others.

Let them eat each other on the grievance side of the country.

Oh puh-leeze! Maybe she hasn’t heard the ‘lyrics’ of any number of ‘Rap’ or ‘Hip Hop’ Music?

What a useful idiot. But no bigger of an idiot than anyone taking her seriously.

Dowdell probably got on The Apprentice as an AA contestant, and I see she hasn’t complained about that.

No surprise she appears with Sharpton, the race-baiter in chief. Since the Michael Brown incident, and Sharpton’s anointment by Valerie Jarret as the administration’s point person on race, racial relations have taken their worst turn in many years. Sharpton has a big part in the legitimatizing of BLM and other race radicals.

Maybe we should send this to AL

The main reason behind successful immigration should be painfully obvious to even the most dimwitted of observers: Some groups of people are almost always highly successful given only half a chance (Jews*, Hindus/Sikhs and Chinese people, for example), while others (Muslims, blacks** and Roma***, for instance) fare badly almost irrespective of circumstances,” Hillary is quoted as saying in one of her speeches.