Prager U Video: The Dark Art of Political Intimidation

Prager U Video: The Dark Art of Political Intimidation 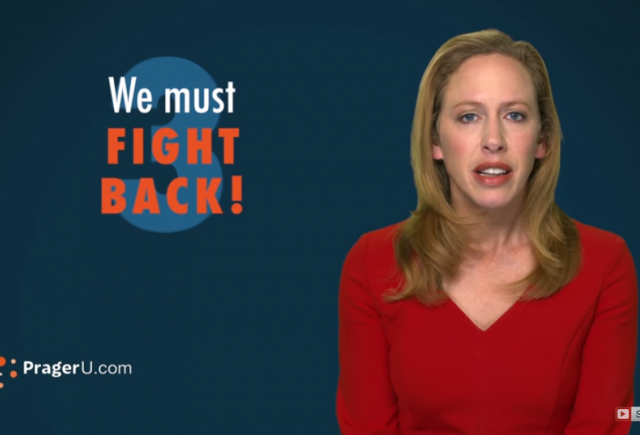 Prager University has had a problem with YouTube placing a restriction on its videos, because conservative views apparently are scary, YouTube Puts Prager University Videos in ‘Restricted Mode’

This video originally was placed on “restricted” mode at YouTube, but now appears to be restriction free after Prager U. mounted a petition drive. From the video notes:

Intimidation, harassment, and blackmail have become the norm in American politics. Why? Because it works. Kimberley Strassel, author of The Intimidation Game, explains.

Buy “The Intimidation Game: How the Left Is Silencing Free Speech”: http://l.prageru.com/2dKNQdY

This is the United States of America. You are totally free to express your political views. No one is going to tell you what you can say or how you can say it, right? But what if you thought you’d be audited by the IRS or have your business boycotted or even lose your job? Would you speak freely then?

This isn’t a hypothetical question. It’s happening to Americans right now. It’s what I call “The Intimidation Game.”

The object of this very real “game” is to make political opponents pay a high price for expressing their opinions. It was a standard technique in the Jim Crow South in the 1950’s. It was used by racist southern Democrats to shut up black civil rights groups like the NAACP. And now these tactics have been revived and improved upon by today’s Democratic Party and their allies on the Progressive Left. They want to shut up conservatives; just like racists once wanted to shut up blacks and their liberal supporters.

They do it in three ways. First, they harass; Second, they investigate and prosecute; and third, they blackmail.

They sic federal and state agencies and bureaucrats on their political enemies. Remember the IRS targeting scandal that began in 2010? That’s when the IRS systematically denied or delayed non-profit status to more than 400 citizen-activist groups, almost all conservative. These groups, representing tens of thousands of Americans, clearly met the IRS’s tax-exempt standards. But the IRS delay and denial made it impossible for these groups to raise or spend money during the 2012 presidential election. Had they been able to, would the election have turned out differently? We’ll never know. Some of these groups are still waiting for their nonprofit approval.

Democrats continue to claim the scandal was the result of some rogue IRS agents who didn’t understand the law. Not true.

We know from documents obtained through Congressional investigations and the Freedom of Information Act that the IRS was taking its cue from powerful Democrats and their left-wing allies, like MoveOn.org. For example, Michigan Senator Carl Levin repeatedly pressured the agency to investigate conservative non-profits. Meanwhile, in speeches, President Barack Obama warned about “shadowy” Tea Party groups. Lois Lerner, the head of the IRS’s non-profit division and a Democratic Party loyalist, took the hint.

In Wisconsin, Democrat prosecutors engaged in a bogus campaign-finance investigation into conservative groups that had supported Wisconsin’s Republican Governor Scott Walker. The prosecutors subpoenaed emails and financial records of the groups and its employees. They staged pre-dawn raids on the homes of Wisconsin conservatives, confiscating computers and correspondence. Then, they warned the victims of these phony investigations and terrorizing raids that they’d go to jail if they told anyone what was happening to them. It took the state Supreme Court to end this use of the government to suppress political opponents. But the message was sent by Democrats in Wisconsin: cross us, and you will pay a steep price.

Intimidation is the leftist intent but it’s backfiring. People are purchasing firearms in astonishing numbers. Leftists needn’t kid themselves. These new buyers won’t just surrender them because some radical leftist doesn’t like them. Nooo. That’s not how it works. They’ve invested a pile of money in firearms because they know they’re safer with them than without them. They’ll keep them and use them to protect their families from all tormentors. We seem to be witnessing widespread defiance of government authority. That should give pause to all four branches of government.