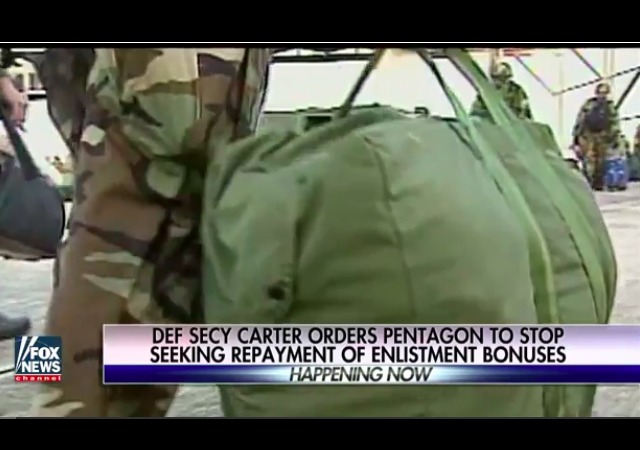 The Pentagon received a lot of heat this week when The Los Angeles Times reported officials demanded California National Guard soldiers repay bonuses the government enticed them with to reenlist and go to war. Secretary of Defense Ash Carter announced he will suspend this program:

“There is no more important responsibility for the Department of Defense than keeping faith with our people. That means treating them fairly and equitably, honoring their service and sacrifice, and keeping our word,”

The report sent shockwaves through Congress, bringing together Democrats and Republicans to demand the Pentagon stop asking for the soldiers to repay this income. House Minority Leader Nancy Pelosi (D-CA) became one of the most vocal critics:

The Los Angeles Times reported that the California National Guard promised $15,000 in bonuses to soldiers to reenlist and go overseas:

Nearly 10,000 soldiers, many of whom served multiple combat tours, have been ordered to repay large enlistment bonuses — and slapped with interest charges, wage garnishments and tax liens if they refuse — after audits revealed widespread overpayments by the California Guard at the height of the wars last decade.

Investigations have determined that lack of oversight allowed for widespread fraud and mismanagement by California Guard officials under pressure to meet enlistment targets.

But soldiers say the military is reneging on 10-year-old agreements and imposing severe financial hardship on veterans whose only mistake was to accept bonuses offered when the Pentagon needed to fill the ranks.

The National Guard Bureau chief noted that an investigation found “13,500 cases where bonuses or student loan payments were distributed, about 11,000 were found to have been given erroneously, due to ineligibility or due to not having the proper paperwork.”

Carter gave no timetable on the suspension, but hopes to resolve all cases by July 1, 2017. He also said that he put together a team “to assess the situation and establish no later than Jan. 1, 2017, a streamlined, centralized process that ‘ensures the fair and equitable treatment of our service members and the rapid resolution of these cases.'”

Folks the members knew when they got the bonus that if they didn’t complete their contract they had to pay it back for the period they had not served. I’m not saying it was all fair and all but they knew before they ever got the bonus the conditions of the money. Now I don’t like how the military goes about collecting but the folks that took the bonuses knew or everyone would have taken the money. Jus sayin. . .

That’s not what happened here, at least not in all cases. From what I read, many of these people fulfilled the obligations of their contracts but were recently told that the money they were given was done so illegally, which was not written in the contract.

Therefore, they tried to collect from the end recipient decades later when they weren’t in breach of a government contract.

I believe you have misread the story. These are not people who failed to fulfill their commitment and were forced to pay back their bonuses. These are people who fulfilled their end of the contract in full and are being socked for the bonuses because California recruiters failed to file paperwork and/or played fast-and-loose with eligibility rules (listing soldiers as high-demand specialities when they weren’t or were only peripherally.)

Some soldiers probably knew that the bonuses were for being ____ when they weren’t, or weren’t quite. Others didn’t. And even when they knew, when the recruiters told them that due to the needs of wartime the thresholds were being lowered (so someone who could understand basic Arabic received a bonus for speaking Arabic as if he were fluent), are the soldiers really at fault for believing the experts?

Mind, I think it’s entirely possible that the Pentagon is owed a lot of money back — either from the state of California or from a lot of recruiters from the individuals on up the chain of command to the army head of personnel at the time, not from the little guys.

lemme pile on here: the SM’s fulfilled their end of the contract, or they would NOT have received the $$$. you only get the bonus *after* you do your bit, or in pieces as you fulfill specified portions thereof. (ask me how i know)

collecting from them years later, because the government agreed to something it should NOT have is not the fault of the SM, but rather the person making the offer and their superiors who didn’t adequately supervise their minions.

their contracts are null and void, and therefore unenforceable. if DOD wants their $$$ back, take it from the a55holes who allowed this mess to occur, not its victims.

“Carter gave no timetable on the suspension, but hopes to resolve all cases by July 1, 2017.”

Which could very well mean that collection will continue for at least another eight months. Ludicrous! He has the power to order an immediate stop to collection, and to order the issuance of a “blanket waiver” under 10 USC 2774; if complaint is made that these bonuses exceed that authority there are other mechanisms that will yield the same result.

Those who fraudulently issued these bonuses are already paying for their perfidy; it is against equity to force repayment from the thousands of recipients who received these funds in good faith.

I noticed there was nothing said about suspension of interest accruing either. Seems there would be legal basis to demand that any interest and fees only begin to accrue when payment is first demanded. Otherwise, you wind up with the magic of compound interest and fee multiplication pounding the debtor into the ground.

Take the money from those VA bonuses.

Nice thought, but it has nothing to do with the VA.

What happened here was that the agents for the US Government failed to properly perform their duties. The military had a need to hold on to certain skilled personnel past the time of their current enlistment. In order to do this, the recruiting personnel did what they have done since Valley Forge, made promises that they could not keep. In this case it was a reenlistment bonus. Then this bonus was paid out improperly or even illegally by the DOJ/US Army/National Guard. Now the DOJ wants the money back. However, they are going after the wrong people. Unless the DOJ can prove that the recipients of the bonus knew that they were not entitled to it, then the recipients acted in good faith and are not responsible for the the loss. The government should go after the people who approved the bonuses and authorized the disbursement, as their actions were directly responsible for the improper distribution of funds. But, that is unlikely to happen as the DOJ has a vested interest in protecting these people and itself.

On NPR, they were trying to frame this story as the government overpaying their employees, and trying to get wasted taxpayer dollars back. Come on. When people complain about overpaid government employees, no one is talking about soldiers.

On NPR, they were trying to frame this story…
NPR’s longstanding statist biases have made it the legal wasteland of the intellectuals. Probably none of its staff have ever been responsible for fulfilling any contract beyond the purchase of a Prius, or of a pre-nup, and nearly none have even given two seconds of thought to getting near the horrible US military. Those rednecks therefore just had the punitive repayments coming, and shame for re-upping in the first place.

In the first place, soldiers don’t get paid nearly enough. Some of their families are on food stamps, which is a national embarrassment. It’s shameful and disgusting.

If you took every SOB in congress and in the executive branch, they wouldn’t be worth one soldier.

I couldn’t care less if soldiers were “overpaid” by some thieving bureaucrats’ standard of what constitutes fair pay in the first place. If the bureaucrats screwed up under their rules, tough. This was an outrage – an absolute outrageous abuse of government authority.

All I want to know is if and when those soldiers who already repaid all or part of demanded dollars get a refund. The overpaid, fat, pencil-pushers at the Pentagon or the CA NG or Jerry Brown or obastard or Ash Carter or SOMEBODY better repay these great Americans MUY DAMN PRONTO.

Insufficiently Sensitive in reply to JackRussellTerrierist. | October 27, 2016 at 9:41 am

In the first place, soldiers don’t get paid nearly enough.
They’re fat and happy in comparison to us draftees back in the Vietnam era.

JackRussellTerrierist in reply to Insufficiently Sensitive. | October 27, 2016 at 5:13 pm

I sincerely appreciate your service. Vietnam vets have been so poorly treated.

Names of the jackasses at Pentagon who thought this was a good idea? Time for them to retire.

Yeah, this was all your idea, Nancy…sheesh Skeletora’s ignorance knows no bounds.