Bipartisan support for our soldiers. 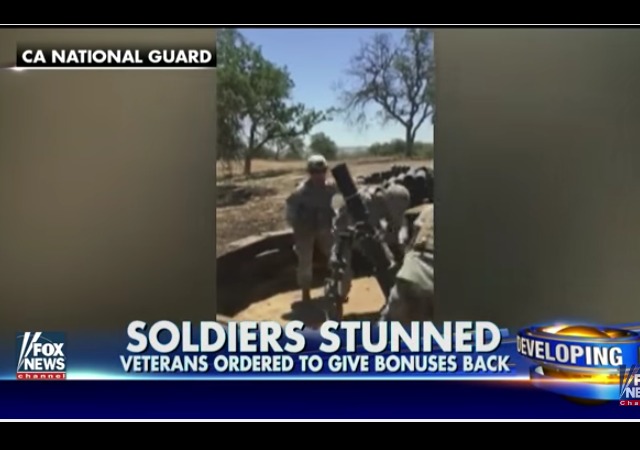 On Sunday, Leslie reported that the Pentagon has started to collect overpayments officials made to 10,000 National Guard soldiers in California to reenlist for war. Now House Minority Leader Nancy Pelosi (D-CA) has joined forces with California GOP members to ask the Pentagon to stop these collections:

The Los Angeles Times reported that the California National Guard promised $15,000 in bonuses to soldiers to reenlist and go overseas:

Nearly 10,000 soldiers, many of whom served multiple combat tours, have been ordered to repay large enlistment bonuses — and slapped with interest charges, wage garnishments and tax liens if they refuse — after audits revealed widespread overpayments by the California Guard at the height of the wars last decade.

Investigations have determined that lack of oversight allowed for widespread fraud and mismanagement by California Guard officials under pressure to meet enlistment targets.

But soldiers say the military is reneging on 10-year-old agreements and imposing severe financial hardship on veterans whose only mistake was to accept bonuses offered when the Pentagon needed to fill the ranks.

House Majority Leader Kevin McCarthy (R-CA) called the Pentagon’s mission “disgraceful” and demanded “the Department of Defense to waive the repayments soldiers would be forced to make if they inappropriately received re-enlistment bonuses for the wars in Iraq and Afghanistan.” He continued:

“Our military heroes should not shoulder the burden of military recruiters’ faults from over a decade ago,” McCarthy said in a statement. “They should not owe for what was promised during a difficult time in our country.”

Politico reports that Rep. Adam Schiff (D-CA) has begun “legislation to address the situation,” calling it “unacceptable” and also asked the Pentagon to stop:

“These soldiers enlisted during the Iraq and Afghanistan wars and frequently served overseas, and we owe them a debt that we can never repay, but we can start by ensuring they are not subject to tax liens or wage garnishments based on the errors of others,” Schiff said in statement, which accompanied a letter to the top state guard official.

Is it that simple? One person claimed it’s against the law:

“At the end of the day, the soldiers ended up paying the largest price,” Maj. Gen. Matthew Beevers, deputy commander of the California Guard told the Times. “We’d be more than happy to absolve these people of their debts. We just can’t do it. We’d be breaking the law.”

Beevers did not expand on the law they would break or if they had the ability to work around it.

Leslie wrote that Bryan Strother, a sergeant first class from Oroville north of Sacramento, filed a class-action lawsuit in February on behalf of those soldiers. But in response, the lawyers for U.S. Attorney Philip A. Talbert in Sacramento petitioned a judge to dismiss the lawsuit since the government waived Strother’s debt.

It’s hard to imagine a more ham-fisted, bollocks-busting move than this.

These over payments were NOT the fault of the guardsmen, and they amount to a rounding error in the Pentagon budget. If that.

Simply gobsmacking contempt for our troopers. Which…if you think about it…is wholly consistent with the Obamic Decline.

How about collecting the cost over runs on the F-35.

Or just ending all “bio-fuel” purchases across the services, which come at some multiple of plain old PLENTIFUL fossil fuels?

Or the cost of “transgender” bullshit in all its forms?

I just emailed North Carolina Governor Pat McCrory asking him to bar state paid travel to California until this situation is resolved.

Where’s our CIC with his phone and his pen? Now he follows the law?

Probably on his knees somewhere.

After they get caught. In a restaurant/store the employee who undercharges or gives out to much in change is the one who pays for it. Why not go after the paymasters who authorized these overpayments?

They did (See below). What I can’t find out, though, is whether Master Sgt. Toni Jaffe ever actually paid the court-ordered $15 million restitution. I can’t determine if she served time, either. Anybody?

There’s a back story here which the media aren’t reporting these days, although they did six years ago. Bee exclusive: Massive fraud at California Guard, officials allege

i was in the CA ARNG for most of my 20+ years in uniform, and the corruption & incompetence of the full time staff was legendary…

there were a few good ones, but many of the F**king Full Timers, as i refereed to the AGR staff were lazy, good for nothing scum.

hell, there was a guy at the HHC of my first unit who was busted, by the check cashing place he used (too often) for cashing checks sent to the HQ for troops that didn’t have a home address. no one else ever noticed.

none of this surprises me at all.

So, if the repayments are ultimately forgiven, are those who already paid it back going to get it back?

Imagine we had competent leadership in the White House. The president, alerted to this situation by a competent America-loving Secretary of Defense, gets the lowdown on the legal aspects of the situation, then meets with the minority and majority leaders of Congress to draft legislation to protect these service members from paying for the malfeasance of the CA guard recruiters.

Then the president goes on TV (and, no, not “The View”) to announce what they are doing, and that they will make good on any payments already made.

That’s what competent leadership would look like. Instead, we have some goofball clown reading cue cards on late night comedy shows.

Logged in just to upvote you. Oh, we can dream, no?

It’s not about the money or following the law. It’s about driving military morale as low as possible and driving down enlistments. When the target numbers are achieved, they cut the military budget and raise social program budgets an equal amount. It’s a microcosmic version of national wealth redistribution. Call it budget redistribution.