“One the reasons I took this office was to make America the leader in this mission.” 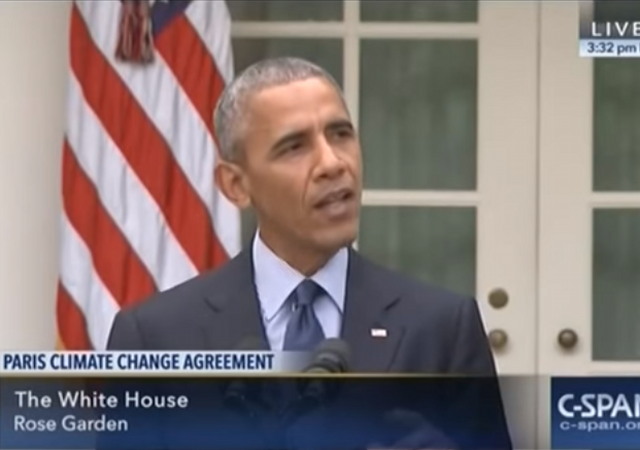 You’ll be relieved to learn that through his ultimate wisdom and expert diplomacy skills, President Obama may have saved the planet. You don’t have to take my word for it, Obama said it himself.

Obama: Paris Climate Accord Best Possible Shot to ‘Save’ Planet

A sweeping global agreement to combat climate change by shifting the world economy away from fossil fuels will take force next month after passing a threshold for ratification on Wednesday with support from European nations.

President Obama, speaking from the Rose Garden, called the “Paris Agreement” potentially a “turning point” for our planet.

“This gives us the best possible shot to save the one planet we’ve got,” Obama said.

Addressing climate change has been a core goal for the president and netting the Paris climate deal is considered a critical part of his environmental policy legacy.

“One the reasons I took this office was to make America the leader in this mission,” Obama said.

Support for the Paris Agreement has widened to nations representing 56.75 percent of world greenhouse gas emissions, above the 55 percent needed for implementation, a U.N. website showed. The deal will formally start in 30 days.

Here’s a video of Obama making his remarks:

As you can probably imagine, not everyone is a fan of the agreement.

In response to Wednesday’s developments, Speaker Paul Ryan accused Obama of acting unlawfully, and in a way that threatens the U.S. economy and jobs.

“The Paris climate deal would be disastrous for the American economy. It carelessly throws away the great gains that the United States has made over the past decade in energy development,” he said in a statement.

“The abundant, low-cost energy that we have unlocked will now be shut in the ground, eliminating the economic growth and jobs that come with development. The result will be higher energy costs for Americans – which will be especially painful for the poorest among us.”

“Furthermore, President Obama has once again acted unlawfully by signing an international treaty without Senate ratification, as required by the Constitution,” Ryan said.

Zero spreads more BS than a herd of cattle ~

“Best possible shot to save the one planet we’ve got…”

From what? Señor Sol? He has all to do with “climate change”.

But Barracula sure doesn’t really believe any of his own bullshit, what with a carbon footprint the size of a tribe of Godzillas.

When I see the various federal agencies decommissioning their A/C systems and turning in their fleets of cars, I MAY begin to take any of this crap seriously.

The planet don’t need saving.
It was here long before us, and will be here long after us.
It’s been alternating between warm and cold for millions of years, all without Obozo’s help.

George said it best. However, but today, the leftists would be denouncing him all day long.

From his actions, it looks to me like his purpose was to enrich himself and his cronies. Certainly all that “green” money that was transferred to companies that promptly went bankrupt, without even any benefit to the public, looks far too much like payola.

And that’s just the public information. The leaks, which show massive transfers of TARP payments to BOTH parties, are worse.

We have a kleptocracy.

Fun camp will include a personalized solar panel to wear with a chin strap.

If the planet is in such a state that it needs Barack Obama to save it, we are all doomed.

You can keep your sun and moon.

I’ll tell you what this is.
With only 104 days left, Obama’s legacy is nothing but a string of failures, verifiable failures.
He is leaving behind a divided country, more divided than ever. He doubled the national debt and ruined the healthcare system. Under his “leadership”, trust in the American Judicial system has been destroyed, and corruption is rampant.
He probably don’t care about any of that, but he does care about us blaming him for it. That’s what hurts him, and there’s nothing he can do about it.
So now, climate change is his core goal. It was actually the one thing that really mattered to him since the beginning, see?
And that’s a good one because it’s so easy to spin the facts and make it look like it’s not really a failure. It’s not easy to verify it as a failure, not in the short term.
“Trust me,” he says, “I’m a genius and a prophet. We’ll see results in 50 years.”
Only that in 50 years most of us won’t be around.

Obama/Jarret are traitors. They set out to turn the nation and the world into the mess it is now in. With the complicity of the Crying Boehners, they have succeeded wildly.

Ever since he’s been ensconced in 24 X 7 Secret Service protection this clown’s already enormous ego has ballooned beyond comprehension. He’s a monumental liar and a fucking asshole of epic proportion. If he was serious about paying down the national debt, he’d raffle tickets to punch him in the face.

…but enough about Der Donald…

I suppose I was a bit vague.

Who cares if objective reality conflicts with the edicts from The One, the president-of-color at the top of the prog food chain? If real experience is in direct opposition to his lefty pontifications, reality must be wrong. Progs have their true religion in this hero of the stupid. Can Grandma hope to continue his legacy? She’ll do her damnedest to see it and raise it.

The best chance to save the world is for Obama to release everything he has on Hillary and then resign.

So, [Catastrophic Anthropogenic] Global Warming is a first-order cause of abortion rites. It’s for Posterity, right?

As for science: limited frame of reference in both time and space. He may want to reconsider his assumptions/assertions and present it from a scientific perspective.

Likening this article and issue to abortion is no worse that attributing supposed global warming to the war in Syria and the rise of radical islamic jihadists. They have nothing to do with each other. We know you’re pro-life, but constantly making the issue at hand the result of Roe v Wade is getting old.

In response to Wednesday’s developments, Speaker Paul Ryan accused Obama of acting unlawfully, and in a way that threatens the U.S. economy and jobs.

Well thank God ryan is mad, I’m sure he’ll defund a bunch of the pet liberal projects and obungle’s green cronyism.
Ryan won’t cave to dem pressure to fund abortion, sanctuary cities and other pet bs of the dems.
Annnnnnnny minute now.
Read the other day once it’s implemented even if Trump wins it’ll be hard to shut it down if not impossible.