Mika: Elizabeth Warren ‘On the Warpath’ for Hillary

Mika: Elizabeth Warren ‘On the Warpath’ for Hillary 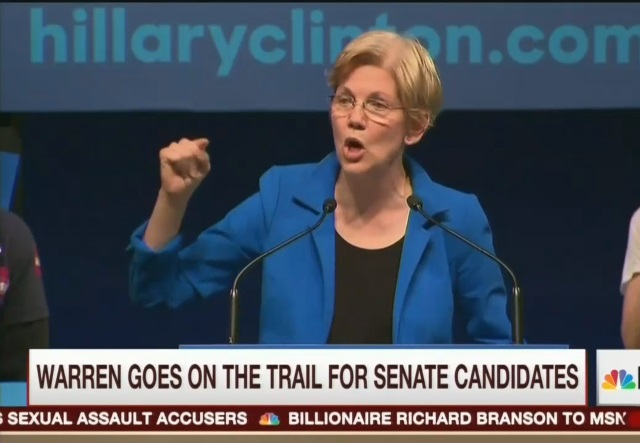 About the last person you’d expect to be taking unsubtle shots at Elizabeth Warren’s phony claims of Native American heritage is Mika Brzezinski. Early in this presidential cycle, Brzezinski was Warren’s biggest fan, urging her to get into the race.

But on today’s Morning Joe, after clips were played of Warren on the stump for Hillary making over-caffeinated condemnations of Donald Trump, Mika declared “she’s on the warpath.” Mark Halperin groaned in response, but a butter-wouldn’t-melt-in-her-mouth Mika feigned ignorance of the gibe she had just aimed.

Note: Nicolle Wallace, former communications director for President George W. Bush, argued ardently that the Warren’s over-the-top rhetoric makes her the wrong person to make the case for Hillary to undecided voters in the closing days of the campaign. Wallace suggested that Joe Biden be given all of Warren’s gigs.

Note: check out the video and notice Hillary [sitting] on the stage with Warren, awkwardly laughing and applauding at her surrogate’s overheated performance. Sidenote: this wasn’t Warren going off script. You’ll see that she refers repeatedly to written remarks. Hillary wants her to say this stuff.

ELIZABETH WARREN: He thinks that because he has money he can call women fat pigs and bimbos. He thinks that because he has a mouthful of Tic Tacs, that he can force himself on any woman within groping distance. Well I got news for you, Donald Trump. Women have had it with guys like you. And nasty women have really had it with guys like you. Get this, Donald. Nasty women are tough. Nasty women are smart. And nasty women vote. And on November 8th, we nasty women are going to march our nasty feet to cast our nasty votes to get you out of our lives forever.

JOE SCARBOROUGH: She is.

MIKA: What? What? [feigning ignorance]

JOE: Nicole, what do you think?

NICOLLE WALLACE: I — I wouldn’t, if I were — [bursts into laughter] I would give Joe Biden all of her events. I just don’t think she does it for the kinds of people that are on the fence about Hillary Clinton.

This squaw isn’t worth much. I’d give a couple skunk hides and a crippled pony. Tops.

Squaw worth much more than that! Can chew three buffalo hides an hour. Make’em real soft.

The legal & education establishments should be made to answer for the Fauxcahantis academic fraud.

You write as if accountability were still a part of American culture.

“Undecided voters” is a vague term covering a lot of territory. A big chunk of that—the BernieBabies–should be accessible to the D’rats if they can manage to dress themselves up in nice bright colors. That’s how I would have expected them to use Speaks-With-Forked-Tongue; some good ranting about the Socialist paradise just one vote away. Instead, they’re using her in yet another pitch to terminal feminists, bitter old divorcees, and the dumber sort of college girls. Which is odd, because Hillary herself is supposed to be the appeal to those demographics. Maybe they think that getting someone two years younger than HRC up there will appeal to the mystical “youth” vote.

If Hillary is such a shoe in, why are they even trotting out Elizabeth Warren?

Why not campaign down ticket?

What a corrupt schmuck. A cigar store Indian is more ethnically authentic than this lying piece of dung. She fits right in with Clinton.

Let’s never let anyone forget Fauxcahontas has defrauded her way through life:

Ol’ Stands With A Lie back on the news, I see.

Curt Schilling is going to push this wack job over the edge and then out of office.