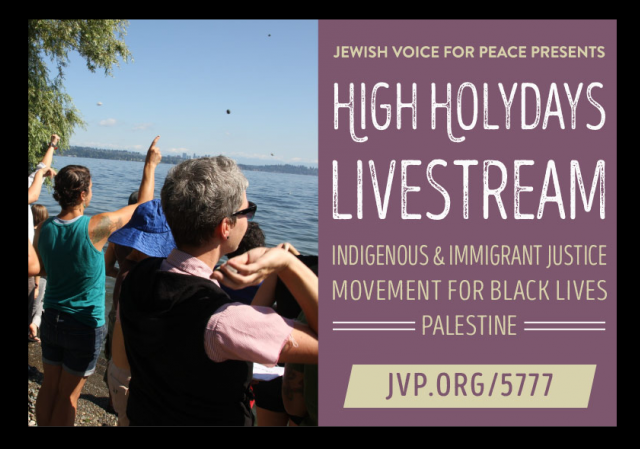 Jewish Voice for Peace (JVP) is a non-Jewish organization that provides cover to the anti-Israel boycott movement (BDS) by legitimizing and mainstreaming its assault on Jewish identity.

As we’ve noted in prior posts (see here and here), JVP activists operate in multiple arenas to exploit Jewish culture and traditions, putting them into service for a vehemently anti-Israel and anti-Zionist propaganda campaign. Various Jewish celebrations and commemorative life-cycle events are constantly being manipulated for Israel-bashing and pro-boycott messaging.

Last April, this identity theft of Jewish heritage was particularly visible during Passover, when JVP promoted BDS in a newly released Haggadah and staged ‘liberation seders’, appropriating the holiday’s rituals and texts for an anti-Israel narrative.

JVP’s High Holiday resources replace the primary themes of the Days of Awe—God’s sovereignty and mercy, and the longing for the day when His mastery will be acknowledged by all human beings—with a narrative that both denigrates the centrality of Zion to Judaism and subverts one of the key themes of the High Holidays: God’s plan for the Jewish people’s freedom, nationhood, and acceptance of the Torah in the Land of Israel.

Taken together, JVP’s materials for Rosh Hashanah and Yom Kippur attack the very core of the Jewish High Holidays and the basic concepts of Judaism. 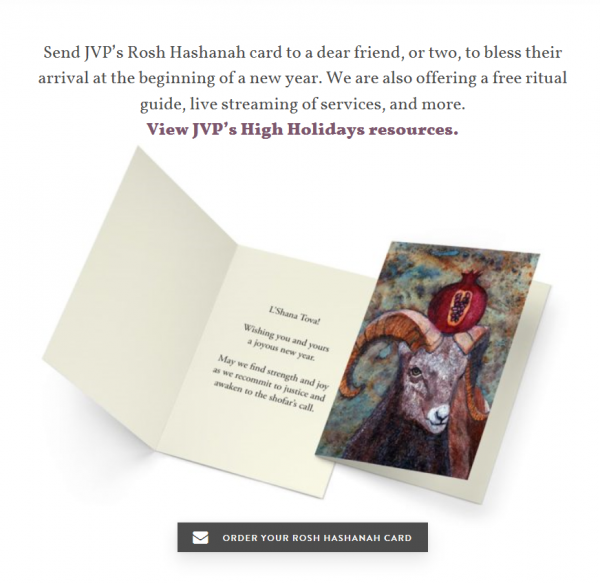 For this Rosh Hashanah, the two-day holiday that ended on Tuesday night, JVP released an updated 14 page guidebook meant to be used at the holiday dinner which is customary to usher in the Jewish New Year. 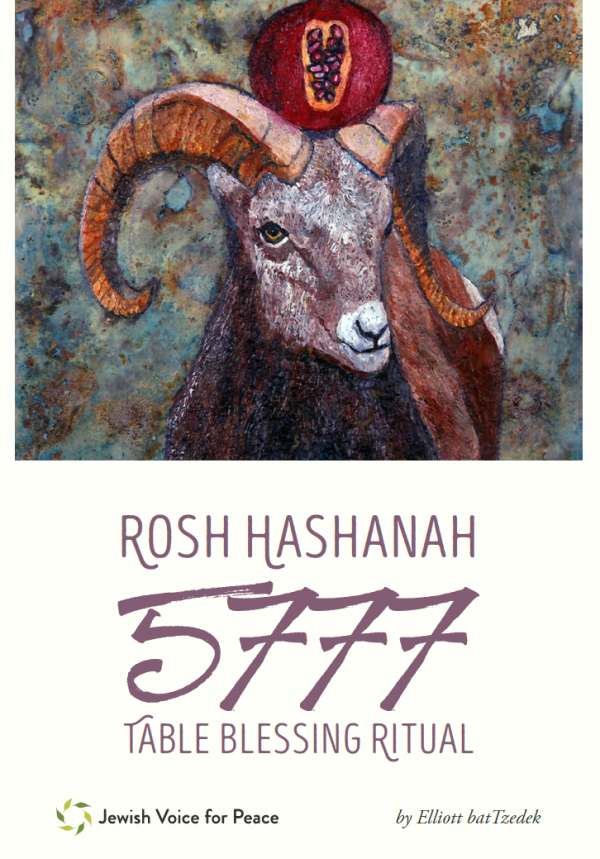 The guide is authored by Elliott bat Tzedek, a self-described

poet, liturgist, bookseller and co-leader of a feminist, non-zionist havurah [study group] in its tenth year in Philadelphia”.

In it, users are encouraged to fight for Palestinian liberation via the BDS strategy, which is also presented as consistent with Jewish values.

A variety of holiday blessings and traditions are presented while participants are repeatedly reminded of the many alleged crimes and transgressions that Israel perpetrates against the defenseless Palestinians. 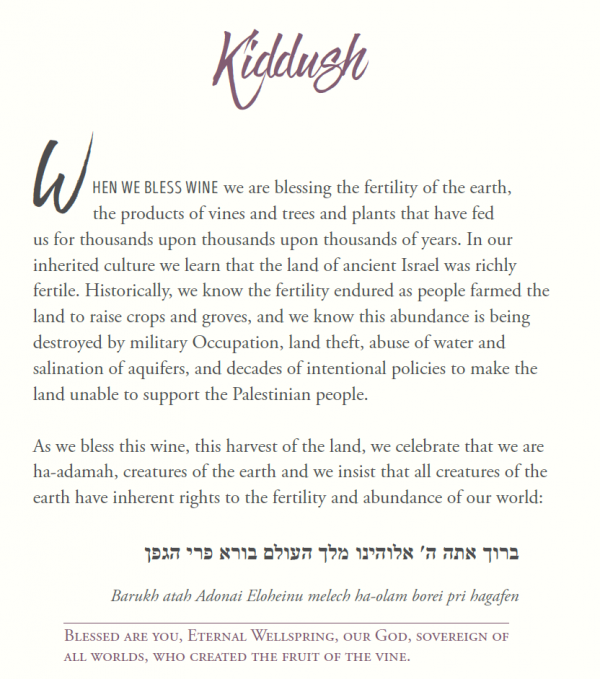 Users of the guide are also invited to congratulate BDS victories in 2015: 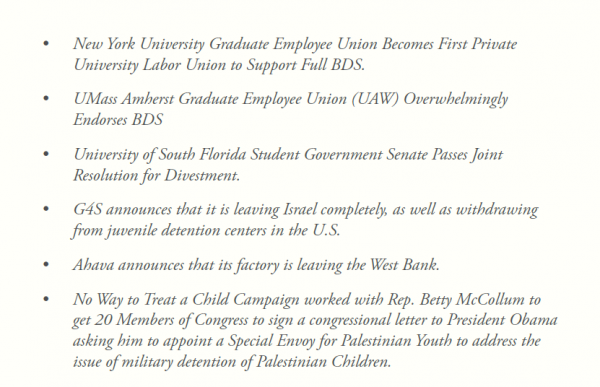 What’s remarkable about this list is its callous disregard of the lives and well-being of Israelis. The complete obliviousness to the fact that the Israeli government contracts with international companies like Caterpillar and G4S because it has a responsibility to take the necessary steps to protect its citizens from homicidal terrorism—in recent months often perpetrated by Palestinian children brainwashed into hating Jews—is breathtaking.

The list also reveals a disturbing detachment from the real lives of Palestinians—the people JVP claims to care about. JVP is proud when companies close up shop in the West Bank because of boycott and divestment pressure. It’s apparently unmoved by the publicly available data that Palestinian workers “detest the BDS movement” for destroying their livelihoods and forcing them to “live in squalor”:

In addition to all the anti-Israel messaging, the “Table Blessing Ritual” guidebook also reinforces the Movement for Black Lives (M4BL) anti-Israel message which it also aims to connect to Jewish values. Users of the guide are supposed to view Israel as complicit in America’s racial tensions and the policing problems within its inner cities.

A “special reading for 2016” links ‘Ferguson to Palestine’ in an intersecting system of oppression. One passage notes the “ever-increasing profits” of arms manufacturers which “display their products on the streets in Black neighborhoods and the skies above Gaza”.

Another passage conjoins the “sounds of the shofar [ram’s horn]” to the “BLM cry: I Can’t Breathe”:

Here’s a helpful video clip that explains the true meaning of the shofar:

Bottom line: These sections of the guide seek to legitimize JVP’s ongoing efforts (see our post here) to position itself as a central ally to the virulently anti-Israel activists who aim to infiltrate BLM’s various sub-groups—like the Dream Defenders. 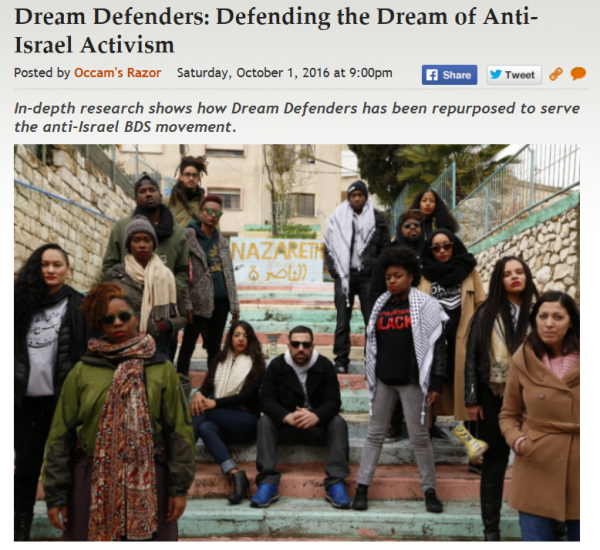 In addition to the new Rosh Hashanah guide, JVP is also inaugurating a series of livestreamed ‘Rabbinic sermons’ for the High Holidays that people can register for online.

Many of those serving on JVP’s rabbinic council have sketchy training and smicha (ordination), so it’s highly doubtful that these sermons will illuminate well the themes and messages of the traditional liturgy.

JVP’s website doesn’t give a lot of detail about what’ll be on offer in these High Holiday sermons, but the newly rolled out Rosh Hashanah ‘Table Blessing Ritual’ suggests that what’s likely are more appropriations of the High Holidays’ values and traditions for a series of Palestinian liberation speeches that will legitimize hostility towards Israel; whitewash the violent actions of its enemies; and ultimately put fellow Jews at risk. 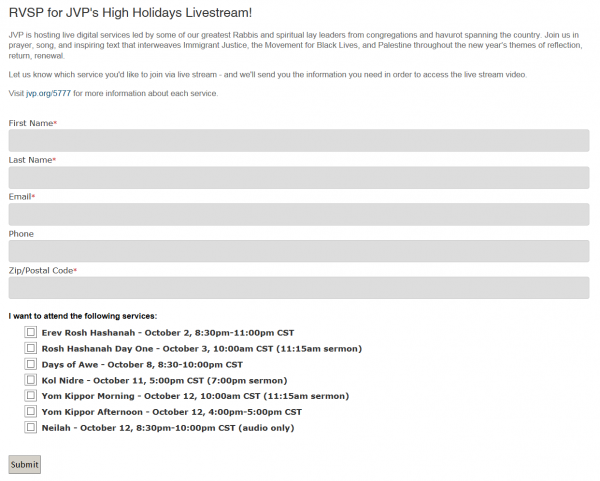 Here’s two video clips that creatively convey the true meaning of the Day of Awe and the Day of Atonement, which begins at sundown next Tuesday:

Jewish Voice for Peace presents itself as a hip alternative to the mainstream American Jewish establishment, which it denigrates as out-of-touch with the progressive views and mores of young Jewish millennials that it aims to better serve and represent.

In recent years, it’s proved a successful marketing strategy for an organization that worked in relative obscurity for decades.

A new study on campus trends released by the Israel on Campus Coalition shows that JVP is increasing its prominence on universities and colleges—it reportedly established 23 campus chapters in the 2015-2016 academic year.

There’s a reason for this newfound campus popularity:

Even though the right of a people to exist and to enjoy self-determination is the most anti-racist and liberal concept imaginable, pro-Israel Jews are regularly being ostracized and excluded from campus progressive movements (e.g., women’s rights, criminal justice reform, LGBT rights, income inequality, Black Lives Matter) because they’re viewed as part of the white, privileged ‘oppressor class’ responsible for the evils of imperialism and colonialism. 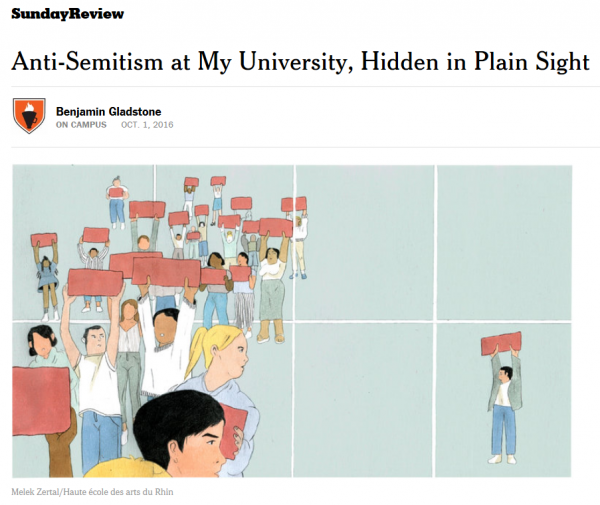 So in this environment, JVP—which never misses an opportunity to noisily denounce Israel’s leaders and its people as autocratic, militaristic oppressors of innocent victims—is fast becoming the only possible gateway for Jewish kids eager to take part in campus social justice initiatives.

Basically it’s come down to this sorry state of affairs: a regressive, misleadingly-named “Jewish” group that hijacks Jewish holidays and faith traditions to unashamedly call for dismantling the world’s only Jewish state is now becoming the single go-to place for young Jews who commendably want to fight bigotry and discrimination.

Miriam F. Elman is an associate professor of political science at the Maxwell School of Citizenship & Public Affairs, Syracuse University where she was recently appointed the Robert McClure Faculty Scholar for her commitment to citizenship and undergraduate education. She is the editor of five books and the author of over 60 journal articles, book chapters, and government reports on topics related to international and national security, religion and politics in the Middle East, and the Israeli-Palestinian conflict. She also frequently speaks and writes on the Boycott, Divestment, and Sanctions (BDS) anti-Israel movement. Follow her on Twitter @MiriamElman