Hillary 2007: You can keep your doctor and plan “if you like it”

Hillary 2007: You can keep your doctor and plan “if you like it”

Was Hillary the first to peddle that false claim? 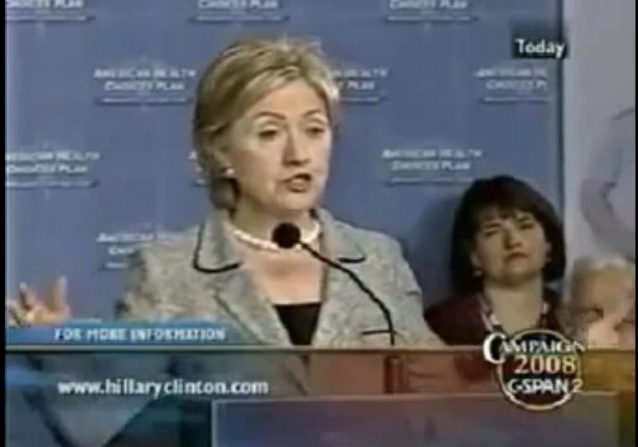 The claim that you can keep your plan and doctor was the line that sold Obamacare to a skeptical public, and gave Democrats cover to rework the health care system, comprising 1/5 of the economy, by a bare majority in Congress.

That false promise generally is attributed to Obama during the 2009-2010 push to pass Obamacare:

Even left-leaning Politifact termed the claim the Lie of the Year.

But Hillary got there first.

This 2007 video shows Hillary making that promise as to Hillary’s healthcare reform proposal which was similar to what became Obamacare. Hillary supported Obamacare and still does.

It was the lie that is devastating our healthcare system, and Hillary got there first.

Fool me once, shame of you. Fool me twice …

I also like to point out to my Dim friends, who are fond of saying that “voter fraud doesn’t exist”, that it was proven voter fraud in the Al Franken MN Senate election that tipped the balance and allowed the ramrodding of this abomination through the senate.

So yes, not only does voter fraud exist, it has happened in the most egregious case with the most dire of consequences for everyone.

Any one remember “Hillarycare”

Mamograms before age 50 were prohibited.
Rationing on queing similar to the problems in the canadian system
Criminal and civil penalities for healthcare professionals to circumvent the problems that arise from rationing

How/why is this news now?

During the 2008 primary cycle, she was the first to promise ‘healthcare reform’, which in turn forced Obama to come up with his own plan, remember mandating everyone to buy a house won’t cure homelessness?

I’m not a lawyer but please Professor or other readers who are; would it be possible for everybody whose insurance costs have gone up to pool together and bring a false advertisement case against the President, HHS or Congress? I’m being serious. There are plenty of ambulance chasing lawyers out there. Could it be done?

Sadly, my Buckeye friend, people don’t seem to stick together no matter how just the cause might be. Lawyers, like bloodsucking leeches, are only there for one reason, and it ain’t anything Godly or righteous.

But we can dream. Bless you.

Keeping your own doctor? Does that mean that there are thousands of doctors chained to walls in people’s cellars? If so, who is paying to feed them and can I borrow yours because I have a sore finger from typing this crap.

Just more confirmation that Crooked Hillary is a bold faced liar who has terrible judgement.

But I guess we don’t really need anymore confirmation? Everyone knows who she is!

Even her supporters know she is a serial liar, a thief, and corrupt to a level that would embarrass even Mayor Daly. The problem is, they just don’t care!

Hillarycare was drafted in late 1993 and early 1994. As I recall, the clinton administration could never get a congressional sponsor for the legislation. Hillarycare was part of the reason for republican house takeover.

I was just reading some of the info, from O’Keefe, about hillary and the Belize money transfer coordinating with an operative for a video. This would be a major story for any other candidate except the hilldabeast. There is literally nothing that will damage her campaign. Especially with women. After watching the clip between megyn kelly and Newt it was absolutely wonderful to watch someone finally tell her a$$ off! We all know the fix is in and all we can do is vote for Trump, or against hillary if that is more palatable. I just read about the number of times Podesta had dinner with top DoJ officials during this campaign! That alone should be enough to disqualify this monster. We will all be dead by then but history will record this election as the low water mark in American history. If we, our children, are lucky there will still be an America!