California city is preparing for fifth day of demonstrations! 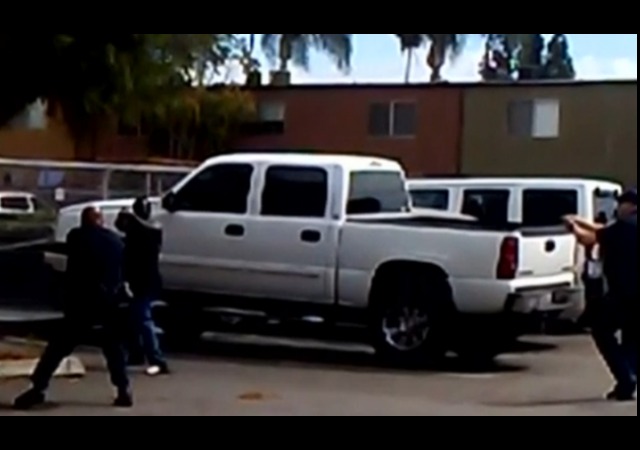 I am continuing to follow the developments related to the police shooting of Alfred Olango, after he took a shooting a stance and failed to comply with responding officers’ orders following a disturbance he created.

On Friday, the El Cajon Police Department released videotapes related to the incident, which clearly show Olango poised to take a shot with an e-cigarette.

The video related to the death of Alfred Olango, 38, was released “for the sake of the well-being of the community” because of misinformation being bandied about, El Cajon Police Chief Jeff Davis said during a news conference.

In the first video, which lasts one minute and 37 seconds and is shot from the drive through of a fast food taco restaurant, Olango is seen backing away from Police Officer Richard Gonzalves and then moving to the side before the video goes black.

In the second video, shot via cell phone by someone who was at the taco restaurant drive through, Olango is seen backing away from Gonzalves before four gunshots are heard and someone is heard screaming. This video lasts perhaps 20 seconds.

The video release aimed to calm tension in the community, as unrest was escalating to the point that the rioters beat one young man and a photographer robbed during Thursday night’s demonstrations.

Saturday morning, demonstrators marched through the center of El Cajon.

About 200 people gathered in Prescott Promenade Park in downtown El Cajon for the hour-long rally before a much larger crowd took to the streets for a march.

Some in the ethnically mixed crowd carried pictures of Alfred Olango, a 38-year-old Uganda refugee who was fatally shot by police.

Speakers in the morning rally questioned why police had their guns drawn after responding to a call about a man who appeared unstable.

So far, there have been no further reports of violence, vandalism, or theft. But more than one dozen arrests were made in the wake of Saturday’s demonstrations.

Twelve protesters were arrested in El Cajon overnight, after they refused to leave the area near the site of Tuesday’s fatal officer- involved shooting, police said.

Four others were arrested for alcohol-related crimes and one person was taken into custody on an unrelated arrest warrant, all in the vicinity of the protest site in the 800 block of Broadway, Lt. Rob Ransweiler said.

Many businesses in the impacted community decided to close for the weekend.

…The note was sent by the Daryl R. Priest, the president of the Downtown El Cajon Business Partners before 1 p.m. on Friday. It reads:

The El Cajon Police Department will be releasing a video of the officer involved shooting at 1 p.m. today. No one has any idea of what may happen next. After conferring with the City of El Cajon, I am recommending that all businesses in the district close early today, at 2 p.m., and stay closed until Sunday. On Sunday morning the situation can be re-assessed. It’s my hope that nothing happens, but we all need to exercise an abundance of caution. ”

Business owners on Main Street had mixed feelings about closing. Some said they would close early Friday and have normal business hours over the weekend, some said they weren’t going to go off-schedule and others were already closed for the day.

In Southern California, my client businesses have contingency plans for natural disasters such as earthquakes. Now, I will need to update their documents to include a chapter on civil unrest, too!

Welcome to life in the new normal of race relations as they have developed under the presidency of Barack Obama.

The truth is irrelevant to the Obama/Soros-funded crowd.

Exactly, I don’t know what’s more pathetic the ones who buy the family’s angle reflexively at this point or the ones who immediately stoop to spouting Serpico fan fiction.

The BLM and associate orgs (think ‘Soros’) do not waste money sending teams of activist agitators into states that are already solidly Democrat. The legitimacy of claims of wrongful police shootings is irrelevant, they ‘protest’ them legit or not. The primary consideration is political, that oflocation.

The Sunday issue of the San Diego Union-Tribune had a picture of a vape device like the one the guy was holding.

Oh. If he was holding the device in both hands with the barrel toward the police, it would have looked like a gun.

IF the officer even had the time to distinguish any detail on the object before he had to shoot. Probably had about 1/2 second to make his decision. The Weaver stance was what sealed the deal. This was suicide by cop.

Surprised they didn’t also publish that picture of Trayvon Martin at 12 years old.

Don’t bring an e-cig to a gunfight?

Good-bye and good riddance. Olongo should have stayed in whatever third-world sewer he came from. The dude was bat$hit crazy.

Hey , he was just offering the officer a toke before he had to go to the Salvation Army Kitchen and peel potatoes for the hungry .