Media blames Trump supporter for his beating by #BlackLivesMatter mob

Media blames Trump supporter for his beating by #BlackLivesMatter mob

“I was beaten to the ground. When I attempted to run away, I was chased by the entire mob of people.” 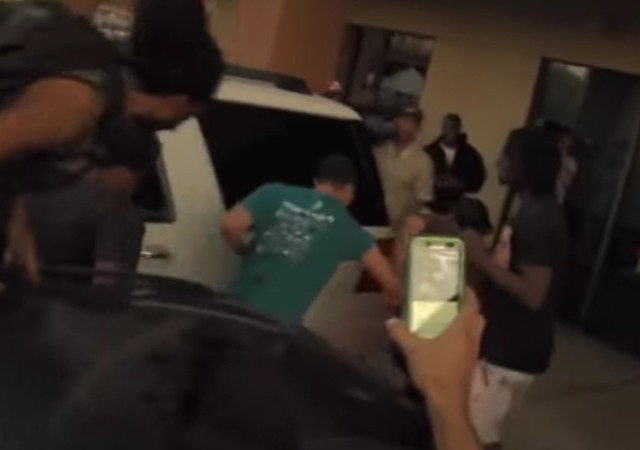 I have been following the developments related to the police shooting of Alfred Olango, after he took a shooting a stance and failed to comply with responding officers’ orders following a disturbance he created.

Perhaps inspired by Republican presidential candidate Donald Trump’s innovative outreach to the black community, one plucky supporter donned his “Make America Great Again” attire and headed to the scene of protests that have ensued since the incident.

Feras Jabro, 21, a San Diego State student videotaped his experience on Periscope. Shockingly, the social justice crowd decided to give him some mob justice instead.

Watching the video, the young man starts out having fun and attempting to engage people. Approixmately minute 9, he is challenged by the crowd and there are several attempts to slap the hat off head to cheers of, “Fuck Trump”.

Around minute 11, the fun turns to fear as he is attacked. He was brought to the ground, then kicked, before he tried to run. Some of the attackers then gave chase.

Here is how the local media is reporting the incident: Apparent Trump backer causes ruckus at protest of police shooting in San Diego suburb

What started as a peaceful vigil Wednesday at the site where police fatally shot an unarmed black man the day before quickly got tense when a man identifying himself as a Donald Trump supporter infiltrated the crowd, reports CBS San Diego affiliate KFMB-TV.

…The purported Trump backer, who was wearing a “Make America Great Again” cap — the slogan of Trump’s campaign — later claimed to reporters that he was “cornered, I was beaten to the ground. When I attempted to run away, I was chased by the entire mob of people.”

Fox News Nationl Correspondent Will Carr tweeted a video showing the attack as it occurred.

And a third video shows him fleeing in terror, and being stopped to be attacked again.

My teen son and I were discussing the issue of visibly displaying our support for Trump while residing in California. I recall vividly how viciously Trump supporters were abused after a rally in San Jose, to the point I had a former Green Beret come as our protection during a Trump rally in May.

We do not visibly show our support, because the lies and smears have given the social justice warriors all the justification they need to attack. There is simply no reasoning with them, and no disagreement with their position will be tolerated.

I am sure many others have made similar choices. However, this November, we will be voting for Donald Trump.

Continuing investigation into the incident shows Olango was holding an e-cigarette when he took the shooting stance. Olango was a refugee from Uganda, who had a history of run-ins with the police, including convictions for selling cocaine, receiving stolen property drunken driving, and possessing a gun as a felon.

Besides the attack on Jabro, a freelance photographer was struck and his camera stolen when he tried to film a fight that had broken out during El Cajon protests.

Yet the media hails this as a “peaceful” protest!

Let’s hope there is a little less “peace” tomorrow!

This is utterly abhorrent. A dismaying sign of the times and the Leftist radical legacy of the odious demagogue, Obama. I’m not a fan of Trump, personally, but, his supporters have every right to be able to express their support for him without fear of being subjected to threats, intimidation and violence.

Leftists are becoming more unabashed about revealing their brownshirt, jackboot inner fascist thug and venting their fury against people who dare to voice opinions at variance with Leftist orthodoxies, or, people who dare to support candidates other than Leftist Dumb-o-crat standard-bearers. And, of course, the mainstream media is giving its blessing to these jackboot tactics.

It will serve these thugs right if the “silent majority” (probably a minority, in fact, in America, today) helps propel Trump to victor over the vile, venal, duplicitous, avaricious, self-serving, power-mad crone, Hilliavelli.

Expanding the “Safari Principle” as elucidated by Eric Holder and his boss, Hussein Obama: “There are people among us who cannot ignore their instincts, control their emotions, or comply with the laws. There if anything untoward should happen, if and when you come in contact with them, anything and everything is totally your fault”
In this land where all men were supposedly created equal of course.
“The Cambridge Police acted stupidly”
“To prosecute the Philadelphia NBPP for voting rights violations would be demeaning to my people”
And Obama even nominated to the Supreme Court a judge who agreed with former New Haven Mayor John DeStefano’s (D) political ‘goombah’, the Reverend Kimber, that one current crop of firefighter applicants for promotion all had too many vowels in their surnames to be granted promotions, irregardless of how qualified or how well they had scored on their tests for promotion.

I agree with everything you said. The saddest thing is that this guy wasn’t even attacked for stating his opinions, he was attacked because he proudly wore a Trump hat.

Rabid pack animals that deserve to be shot down in the street like dangerous dogs.

Really, I’m waiting for the inevitable time when someone with a concealed pistol permit shows up to one of these rallies with a Trump hat on, the crowd attempts to beat him or her and three or four of them end up with bullets between their eyes (fully in view of a news camera, which captures the attempted beating and the fully appropriate deadly threat response).

It will teach all these rabid, slavering progressives to be polite, lest they end up dead for being morons.

More than likely that the shooter will end up in jail and murdered by other inmates.

So, the lame-stream media are blaming the victim for inciting a racist lynch mob?

How retrograde can that be? The KKK is a militant arm of the DNC, these goons must be the other arm.

If you’re ever caught in this situation (Rule #1- don’t.get.caught.) the only thing to do is grab the first one near you and- no matter what happens- take at least one of the filthy trash with you.

With a bit of luck and a lot of joyous violent screaming and creepy giggling, you may just shock the mob enough for a fast getaway.

You don’t need to reload a knife. Also:

I actually prefer the Ka Bar Becker Necker, which despite the name I normally wear as a boot knife, due to its WWII heritage and it has a handy bottle opener at the back end. Which I use more than the blade, as I tend not to wade into hostile mobs.

It’s like the Marine Corps rules for gunfights. Bring guns. Bring as many of your friends who have guns. Well, in addition to your CCW weapon, bring knives. Lots of knives. Years ago, and many of you if not most will not remember this, an NYPD officer was returning home from his shift on the subway. He expended the five shots from his j-frame Smith, fumbled the reload, and was killed.

Always, ALWAYS, train like you’ll fight. If you plan on protecting yourself and others with a revolver, great! I love revolvers. But when you reload a revolver, you have to do it every time as if you were in extremis. Grasp the revolver in your left hand, thumb on the cylinder on one side, middle two of the other fingers on the cylinder on the other side. Push the catch with your right finger which remains on the butt. Push the cylinder out and turn the gun vertical. Now that you have a firm grip on the gun with your left hand, take your right hand and slam your palm down on the ejector rod. Like you hate it. You need to get rid of the spent cases. Then take your speed loader and reload. Never ever reload your revolver except from a speed loader, if you actually intend to rely on it. People have died by not strictly adhering to these principles. Reloaders, for instance, who intend to reuse the cases, carefully eject the cases into their palm so they can pocket them. Others will refill the cylinder one by one with individual cartridges. Do not do this. Always eject the spent cases forcefully and let them fall to the floor. Always use the speed loader. Your life and other people’s life depends on this. Then push the cylinder back into the frame.

Note; the crane or yoke or whatever your manufacturer calls it, the part that the cylinder rests on when it swings out from the frame must never be treated harshly.

But I digress. I usually carry two knives. One in my boot, and one around my neck. My state (always check your local laws) had weird thing about lock blade knives. Any knife you could flip open was considered a gravity or switch blade knife. With enough practice, I don’t know of a lock blade knife you can’t flip open. But fixed blade knives could meet all the other legal restrictions (single edge, 4.5 inches or less, etc.) and not violate any of the laws. So I have a nice collection and now that the legislature has eliminated the gravity/switch blade definition I may carry three.,

But the thing is having gone three three minute rounds inside the ring against a single opponent in my younger days, you’re still not going to last long against the mob.

That should have been:

“Push the catch with your THUMB OF YOUR RIGHT HAND which remains on the butt.”

I tried searching, but so many NYPD officers (God bless them) have been killed since then that I couldn’t find the specific officer who might have lived had he had the equivalent of a bayonet.

What country is this again? I don’t recognize it as the USA I was born in ~

I know that it is cowardly, but I do not have any bumper stickers or yard signs proclaiming my political beliefs. I know that the Liberals are prone to “key” cars, slash tires, throw eggs and bricks, etc. when there is no one to observe them.

I am less afraid of attacks on my person, because those can take place only in my presence (duh!!), when I can defend against the attack. But the Libs tend to attack property or to attack people only when the attackers are in packs. My 1911 with three full mags can handle a small pack!

My tactical trainer has often cautioned us against warning shots, but I disagree. A shot to the center mass of the person in the lead is a warning shot for the rest of the pack!

What is cowardly is that these people will steal your sign in the middle of the night or key your car when you’re not around. Knowing this is not cowardly. It’s just being a realist. Our opponents are cowardly vandals.

I went to the San Jose rally and afterwards the news reports stated that Trump supporters were attacked after “provoking” the demonstrators. What kind of provocation did they engage in? Publically supporting Trump. Either wearing Trump clothing, holding Trump posters or simply saying, “Go Trump.”
Here in the liberal parts of California you don’t tell anyone you support Trump for your own safety.
I so hope for a monster vote.

“She was wearing a short skit! What did she EXPECT would happen?!”

Victim-shaming. It’s different when we do it, because shut up.