Architect of Obamacare can’t handle the truth about the crumbling house he built. 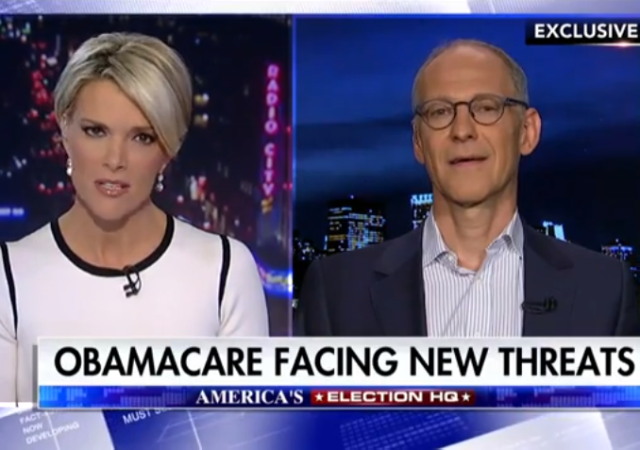 Obamacare has faced some new problems, including the rising cost of premiums and the shrinking pool of providers participating in the program. Additionally, not enough young healthy people have enrolled to offset the costs created by less healthy older people.

Dr. Ezekiel Emanuel, one of the chief architects of Obamacare and the center of controversy over the “death panel,” knows who’s to blame… Republicans. You know, the party the Democrats excluded from the law’s creation and had nothing to do with its passage.

He appeared on the Kelly File and made his case. Real Clear Politics reports:

Dr. Ezekiel Emanuel, one of the architects of the Affordable Care Act (Obamacare), joins Fox News Channel’s Megyn Kelly to discuss some of the problems with the law.

“Your reporter did a very nice job of cherry-picking only the most extreme,” he said about the cost increases associated with Obamacare. “They don’t raise premiums across the board. Some have gone up higher than others, but… the premium hikes are because they came in, they did recalibrate the market. They were trying to get market share, and it is a correction. It is a problem that we do need to address. But it is not across the board. On average, we do not have higher than 15% increases in premiums. And it is going to be a one time increase.”

“Republicans bear some of the responsibility for this,” he said. “Remember: Marco Rubio eliminated some of the risk adjustment that actually buffered and helped the insurance companies in this situation. He took it out of the budget. And that is a serious problem… There is not plenty of blame [to go around], it is Republicans.”

Remember when they said you could keep your health plan and your doctor?

Remember when they said this would save families $2,500 per year?

See our prior coverage of Dr. Death Panel here:

A house built on sand will soon collapse, especially if it is built on someone else’s sand.

“And it is going to be a one time increase.”

Well, I suppose in a way, ‘continuous’ could be considered as ‘one time’.

Exactly. Especially if the continuous increase is also “perpetual”.

There was a time when such obviously delusional people were locked up and treated for their aberrations. There were even special facilities built and operated for just that purpose. Oh, wait…

The Left hated being put in them, so they shut them down and make it hard to get help.

Dr. Emanuel is getting close to the point where he doesn’t think we should be expending any “scarce” medical resources on him, he’s already had most of his ‘complete life’.
http://www.thelancet.com/journals/lancet/article/PIIS0140-6736(09)60137-9/fulltext (free registration required)

Of course that was over seven years ago. I wonder if he’s changed his mind as he’s gotten older, or did he just always assume that as one of the ‘right’ sort, he wouldn’t have to worry about losing his access?

“Remember: Marco Rubio eliminated some of the risk adjustment that actually buffered and helped the insurance companies in this situation. He took it out of the budget”
____________________

If the problem with this great bureaucratic nightmare is that the Republicans won’t authorize billions more taxpayer dollars every year to “buffer” and “help” the insurance companies that are going bankrupt from it, you’d think a genius like Emanuel would figure out that there’s something very wrong with this scheme. But no, that would require logical thinking and dealing with fiscal reality, something leftist tyrants like Emanuel adamantly refuse to do.

Yes, ‘buffering’ implies a certain cycle of budget shortfalls and overruns that would leave the ACA budget neutral in terms of cash flow. For some reason, it has been all budget shortfalls, all of the time, out until the very end of the projections, thus requiring a constant flow of tax dollars to prop up… um… we mean support it.

Imagine that. Gee, who’da thunk it?

Interesting that the whole thing was built to fall apart after Obama is out of the White House.

Bear in mind that it would have been MUCH less popular and MUCH more prone to fail by now without Barracula’s illegal tweaks.

Most important is to mention the new media’s corruption, and the GOPe’s eventual complicity.

Not really. It allows him to take credit for the implementation while simultaneously denying responsibility for the collapse. In other words, typical Democrat behavior.

According to the Galen Institute – more than 70 significant changes have been made to the Patient Protection and Affordable Care Act, at least 43 that the Obama administration has made unilaterally, 24 that Congress has passed and the president has signed, and three by the Supreme Court.

Sounds like there were a whole lot of problems with this poorly designed piece of crap.

No. Many of us knew “what’s in it” from the git-go, and we told you liars and tyrants. We may not have known the finite details, but neither did any of the idiot Deemocrats who crammed it though the Congress.

Now you pukes get to own it, entirely…lock, stock, and reversed barrel.

We were warned about this title-rich, brain free class getting entrenched and mucking up the works. This guy is just another shout down shill covering his ass. He wasn’t even around. Texas did it and Rubio is the most powerful man in the world. She did a good job of making the piggie squeal.

Some mistakes are so obvious that only really smart people are tempted to make them.

The problem isn’t that the Republicans are being blamed. The problem people that vote Democrat will believe it.

I’d shorten that to “the people that vote Democrat”.

Well Zeke’s creds are that formerly he’s an oncologist but has been floated around in the medical ethics space primarily. “His two younger brothers are Chicago mayor Rahm Emanuel and Hollywood-based talent agent Ari Emanuel.” is pretty much nuff said but it seem that he is all hat and no cattle. The LA Times describes him as an “imminent oncologist” but it looks like he spends most of his time as far away from tumors as he can get. Perfect credentials for a lefty pundit.

Tell the LA Times that an “imminent” oncologist is not yet an oncologist.

Spell checker bit me in the ass, but you get the idea.

Now this clown knows what Edsel salesmen felt like.

So, throwing grandma off the cliff, flooding the Medicaid roles, advocacy for abortion rites, and the health penalty tax were a measure of success?

What a sinister figure.

It’s really surprising to me that this vile cretin hasn’t been found dead in a ditch by now. Tree of Liberty and such.