That’s probably not what DOJ hoped to find was the problem. 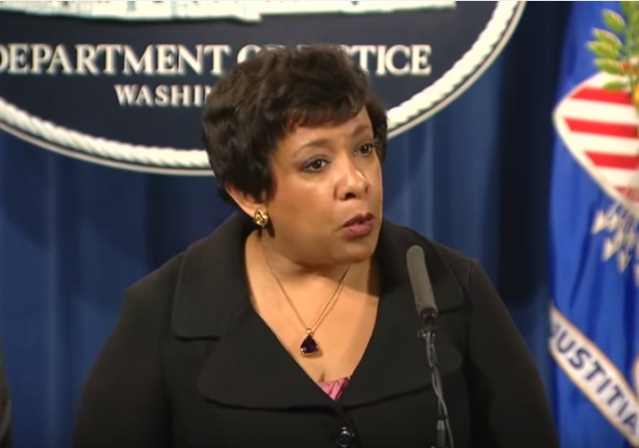 America’s police are facing unprecedented scrutiny amid relentless criticism; it has become so intense that the Wall Street Journal calls it a “crisis” and calls are made to “overhaul” our law enforcement system.  One solution, offered by the abhorrent Al Sharpton, is to nationalize America’s police forces and to place them under the purview of the Justice Department.

Enter the United States Department of Justice.  The DOJ released a report on “Advancing Diversity in Law Enforcement” (embedded below), and it includes some rather . . . interesting proposals.

Among them, suggestions that criminal background checks are inherently racist and allowances should be made to convicted criminals wishing to join a police department in certain circumstances.

From the DOJ report:

Researchers and practitioners have also highlighted that the use of criminal background checks, which are a regular part of the screening process for many agencies, is likely to disproportionately impact racial minority applicants since, for a variety of reasons, individuals from those communities are more likely to have contact with the criminal justice system.  While law enforcement agencies are undeniably justified in carefully vetting and investigating potential hires, excluding applicants regardless of the nature of the underlying offense, or how much time has passed since an offense occurred, or without any consideration of whether the candidate has changed in the intervening period, can be a significant – and unwarranted – barrier.

Another point of contention for the DOJ is the requirement that American police officers be American citizens.

Again from the DOJ report:

The DOJ recommends a “holistic” approach to hiring police officers and personnel, along with a review of physical tests that show women to be less capable in this area and written tests that negatively impact minorities.

Some physical ability tests that purport to simulate the tasks undertaken by police officers have been found to have an unlawful disparate impact on women and where they are insufficiently related to actual job duties.140 For example, a physical test that included a stair climb, a run, and an obstacle course was found to have a disparate impact on women and be insufficiently related to the police officer job. Similarly, tests that purport to measure overall physical fitness (such as push-ups, sit-ups, and running) but apply a unitary standard to men and women have been found to disproportionately exclude women from law enforcement positions and be insufficiently job related. For example, the requirement that men and women perform the same number of push-up and sit-up components of one physical fitness test was found to violate Title VII.

. . . . Extensive Title VII case law has revealed that certain written tests used as part of entry-level hiring in state and local law enforcement agencies are likely to create an unlawful disparate impact, and are not necessary for selecting the most qualified candidates. For example, while skills like reading comprehension and arithmetic may be important for these positions, tests that focus solely on these skills may not sufficiently or accurately represent the skills needed for the position and thus unnecessarily screen out qualified applicants. Reliance on these tests can create an unnecessary barrier to the hiring of qualified racial minority applicants who may have been selected if the test were a better reflection of what was actually needed on the job.

In addition, certain on-the-job policies relating to uniform and appearance can also prevent women and minorities from serving as law enforcement officers. For example, unnecessarily rigid grooming and uniform policies that prohibit beards or religious headwear may pose an illegal obstacle to retaining minorities and women, including religious minorities.

Maybe I’m just generally annoyed but did they grow this critter in a petrie dish from Maya Angelou and Oprah cells?

“One solution, offered by the abhorrent Al Sharpton, is to nationalize America’s police forces and to place them under the purview of the Justice Department.”

From the standpoint of our criminal government it has worked just fine.

I’ll say this – if these people aren’t all nuckin’ futs, they’re so close you can’t tell the difference.

Though I never realized there would be so many.

But we just have to draw the line somewhere—

Call me a reactionary, but I don’t want to see bearded women on any police force.

Well, that was certainly not fuzzy, Fuzzy. What has become increasingly clear is that the Attorney General is no longer the head of the DOJ but is in actuality a de facto member of the White House Staff. And that justice is no longer her concern, but instead Obama has placed her in charge of Central Planning to assist him in shaping the U.S.A. like a giant block of silly putty.

Obama has released so many convicts and few jobs available. So, we’ll make them cops. Don’t tell me that man ain’t smart!

I think we are seeing only the tip of the iceberg regarding obama’s release of convicts. It would not surprise me to hear him say he is going to release enough minority convicts to make the demographics of the federal prison system match those of the general public.
One more month until we see the full horror of obama. You know, he’ll be more flexible after the election.

Yeah but then the next morning they would wake up the next day wanting to shoot unarmed black men.

Imagine how easy a life of crime would be if all police were federalized. This could fix my retirement shortfall within six months. Tax free. So, um.. let’s not reject the idea out of hand because it emits from the Jim Henson-inspired Department of Justice. Let’s give their idea an honest review. ‘Even a blind squirrel…’ and all that. I’m trying to be objective is all.

They are telling us that blacks and minorities are generally non-citizens and criminals?

Nothing Donald Trump has said comes even close to this level of nasty prejudice.

When political correctness leads to more dead bodies, I can no longer hold my tongue.

Does maintaining purity as an ideological leftist require that you become functionally retarded?

I posit that being able to physically subdue a resisting suspect is the most important fitness/strength job skill for a police officer. [The alternative is obvious – if you cannot subdue a suspect with your non-lethal physical abilities, then you are more likely to be forced to use semi-lethal (baton, choke-hold, etc.) or lethal (gun) force.]

If we accept my first premise, then I offer any leftist (including Loretta Lynch) the opportunity to participate in the following scientific proof:

We will recruit a group of 50 men and 50 women volunteers (who don’t know the test parameters). We then test them for push-ups, sit-ups, and stair climbing. [We also offer a $100 prize to the top 10 finishers – to ensure a true effort by all of the volunteers.]

I then take the top 50 finishers on my team (regardless of gender). You get the bottom 50 finishers on your team. We then draw by random lot one participant from each team for a wrestling match until all 50 matches have been defined.

I hereby agree to run this experiment until the leftist who accepts this challenge decides we have reached a statistically significant sample, or they run out of money. Whichever comes first.

They use other people’s money.

It is your GD job, do it you small handed midget.

They are deliberately trying to erode all respect for police officers.

We seem to be on the way to Fahrenheit 451, where fireman burn things up.

The rest of our government is made up of criminals, might as well make it a “requirement” to be one of the new federal police officers.

Wide diversity of opinion here! I applaud that.

I totally agree. Under no circumstances should we support “equality of outcome”.

In that spirit, why do we want tariffs? We need free trade across the world. I don’t want to support some under-educated white guy only capable of working on an assembly line. I don’t want to subsidize him with a high cost job through protective tariffs. That is costing ME money.

I can also import labor that will work harder, be unionized cheaper and won’t complain about the work conditions. When they get hurt, I just get immigration to ship them home and I can get a new one. I have no obligation to anybody but my investors and my family.

If some little brown guy in Mexico or a yellow guy in China can build it cheaper and better, screw the white guy. I was smart enough pay attention in school, go to college and build a business. I want my goods and services as cheap as possible. It doesn’t matter to me if all the white guys without an education land in the gutter. They and their equally inferior offspring can be controlled by the slightly smarter ones in law enforcement. Law enforcement can round them up and stick them in ghettos. The ones who resist should be shot or locked up. When their crime rate rises, the prisons will reflect the diversity of the country without affirmative action.

I don’t want to pay taxes for their education, either. I send my kids to private schools and that costs me a lot of money. I have nothing left to pay taxes. Luckily I don’t have to. I have lawyers and accountants for that.

Let Ford and the other capitalists move their businesses so that my stocks will be more profitable; my cars cheap and well made. White trash needs to be lumped with the other losers. We don’t need them and we don’t want them. Right, guys!

Come on people, why are you willing to pay more out of YOUR pocket just so a job can stay here for a stupid white guy? That is ‘equality of outcome’. We deplore that. Don’t we?

We don’t need to worry about them voting. We can find lots of reasons to disqualify them. We have flunkies who figured that out 100 years ago. Besides, we just tell them that they are better than the other trash.

Apparently DOJ is just trying to find police officers the minority communities can identify with – criminals or people who have little loyalty to America.

That’s the point of “community policing” in big cities. You let the community decide what the cops can do not the cops.

This talk of noncitizens and religious minorities seems to be a deliberate attempt to put Muslim fifth-columnists on our police forces.

On the one hand, the pushing of “community policing” is definitely an attempt to pave the way for the sort of “Sharia police” we see in France, Germany, and other parts of Europe. On the other hand, however, it really seems to be an attempt to get criminals, gang members, and others unsuitable for jobs in law enforcement into law enforcement. Convicted criminals and noncitizens are just as important to the radical left as are Muslims.

If you’re not an American you don’t get to tell me what my law is and that I’m breaking it. Also, if you previously committed felonies and broke laws how are you going to tell me I have to follow them? And if you’re a woman wearing a full burka or niqab why would you ever think people are going to listen to anything you have to say.

To be fair to the DOJ, requiring police officers to be U.S. citizens and not have a significant criminal record is a real obstacle to enabling U.N. peacekeepers to take over policing in the USA.