Creepy clowns sighted in the Netherlands, too 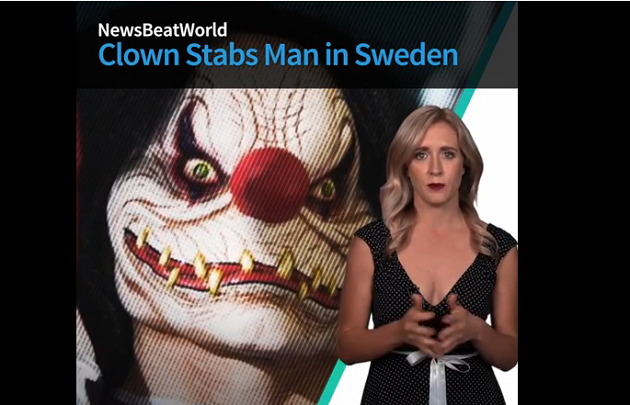 Creepy clown incidents have been sweeping across the U. S. to Mexico, the UK, Australia,  France, and now in Sweden.  In Sweden a group of clowns encircled children and threatened them with fake chainsaws last week, and this week, a young man was attacked and stabbed in the shoulder by a person wearing a clown mask.

A teenager has been stabbed by an attacker wearing a clown mask in western Sweden, police have said. Hysteria surrounding a wave of creepy so-called ‘killer clowns’ has spread in the last few months, from the southern US states across the UK and Europe.

In the latest ‘killer clown’ incident on Thursday (13 October), a youth who was born in 1997, was left with minor injuries to the shoulder, after going outside for a cigarette in Varberg – roughly 50 miles south of Gothenburg – where they were confronted by a masked attacker.

The reports come a day after two people in clown costumes reportedly threatened to kill a woman in central Sweden. Police in the district of Halland County are still searching for the culprit, but have not yet linked it to the craze.

“We do not know what prompted this. It was not a robbery, and I do not know if they had fought before,” spokesman Ulla Brehm told Gotesburgposten (in Swedish). “It’s hard to say if this is something that has to do with the trend that has come from the US, but there was a clown mask on the site.”

In a seperate [sic] incident in the country on Wednesday this week, a group of men in clown outfits surrounded four 10-year-olds before threatening them with fake chainsaws.

In addition to Sweden, the Netherlands has also experienced creepy clown sightings, sightings that prompted local police to take to Facebook and warn creepy clowns and potential creepy clowns that their behavior is “punishable.”

The creepy clown phenomenon, which has been spooking the United States, appears to have arrived in the Netherlands after sightings of two people dressed in masks and bearing weapons, the Dutch police said.

One person was seen overnight on Monday (Oct 10) armed with a knife and a hammer, dressed in a costume and a scary clown mask near a park in the southern town of Oss.

And another was seen on Tuesday, after being spotted earlier in the week by residents in Almere, close to Amsterdam, further north in the country.

“Dear killer clown from Oss, clearly you find it either pleasant or fun to give people the fright of their lives,” police in Oss wrote on Tuesday on their Facebook page.

“You probably don’t know, but to play clown in this way is punishable,” they warned, adding they were taking the matter very seriously.

There’s much speculation about what started this creepy clown epidemic and why it seems to be spreading around the world.  Some argue that the sightings might be fabricated in some cases, that people read the reports and begin to don clown masks and costumes to play a role in the phenomena, or that it’s based in our deep-seated fear of clowns.
In other words, no one really knows what’s going on, just that it is spreading.  And creepy.
More Sharing Options

Generally speaking, masks or anything that obscures the identity of the person wearing it is known to cause a shift in their behavior…to the darker side of human nature.

There are a LOT of examples in American history.

You missed a story yesterday:
http://abcnews.go.com/US/clown-lives-matter-march-canceled-death-threats/story?id=42805927

IT started about five-seven years ago. Some guy in a small East Coast town started appearing in places dressed as a clown similar to Pennywise with a balloon. The story went viral. Then a couple of copycats popped. Then some guy decided to take advantage of it.

I was speaking to a police offer who usually deals with serious organised crime and this clown thing has gotten so out of hand that valuable resources from her team were being diverted to deal with bloody clowns!

The upshot was that a number of young men, late teens to early 20’s were behind a number of clown sitings causing distress for no other reason than to have fun at other peoples expense.

Sooner or later though someone is going to get seriously hurt!

What it will take is the death of an armed “clown” in the act of threatening someone. And if someone harms a “clown” who is threatening but turns out not to really be armed, especially if they are one of our officially above the law protected classes, all h*ll will break loose against anyone who is the victim of such a “prank”.

This will all go away when the house of representatives goes back in session and the number of clowns available drops sharply.

The stores here in Sweden are loaded with creepy clown masks.

And here in America, they are pulling the clown costumes from shelves and stopping sales online. /smh