Imagine the Horror at MSNBC to Hear Matthews Say This! 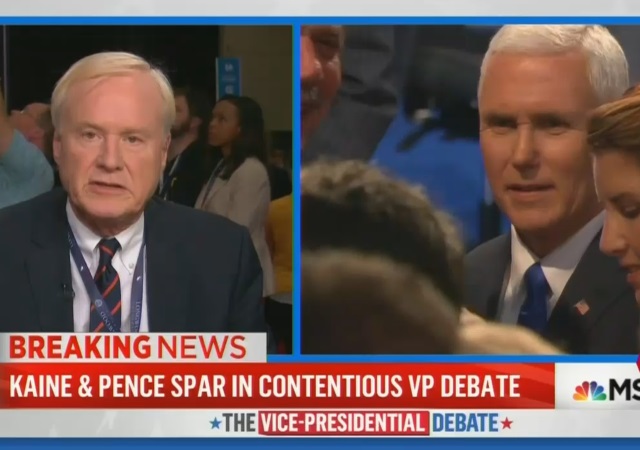 How well did things go for Mike Pence and the Trump-Pence ticket tonight? Even Chris Matthews—no doubt to the horror of Rachel Maddow who was helping oversee the post-debate commentary on MSNBC—had to declare Pence the “winner.”

Perhaps even worse for the denizens of MSNBC and its viewers, Matthews said Pence looked “strong” and like a “grown-up,” whereas Tim Kaine came across as “desperate.” Ouch!

Of course, Matthews had to feed a bit of red meat to buck up the surely bummed-out MSNBC audience. And so he said that Pence had the harder task, dealing with a “couple of deuces” in having to defend Trump, whereas Kaine had a “full house.” But if Kaine really did hold such an overpowering hand compared to Pence, how horribly did he play his cards to lose the game?

CHRIS MATTHEWS: I think that Mike Pence did all the things right that Donald Trump did wrong. His body language was excellent, he was very good on reaction, he looked like a grown-up. Whatever his words were–of course he was playing with a couple deuces against a guy with a full house, so it was very difficult for him in terms of the issues, I mean, he had to defend Donald Trump. But he came across as a grown-up, strong . . . On the other hand, I thought at times, and I like the guy, Kaine, was a little bit, I don’t know what the right word is, a little desperate there, jumping in all the time, always trying to get his points and he didn’t wait his turn . . . But overall, I think the winner tonight will end up being, in terms of the debate and what they were trying to accomplish, Pence.

Kaine was not trying to get his point across when he was interrupting. He was making snide snippy comments he sounded like a 14yr old girl

No he looked like some yipping chihuahua that just went berserk.

Like a 12yo who had been rapped by a paedophile you mean? Lucky he is on Clintons team seeing how in touch with women she is.

I didn’t know much about Gov. Pence before the debate. He truly seemed in control, even tempered and was clearly the adult in the room. Good showing for him. Not sure if the VP debate means much but if it does this was awful for the Clinton – Kaine ticket.

Should we get a theme song for Chris Matthews now …

“The Thrill is Gone!”

Since the Cathedral is desperate to make this into anything but a win for Pence, expect Crissy to recant soon.

Kaine looks like a Kennedy 2nd cousin who has a drinking problem. He is the one they make cut the grass before everyone else plays football at the compound.

Kaine looks and acts like a child molester, but that seems a common trait amongst sh*tlibs.

Didn’t the Kennedy’s used to have gardeners to do that?

It is a good thing after this “debate”, for the Clinton campaign that they have that warehouse full of pre-filled ballots in election commission boxes in Columbus, Ohio

Oh, yeah. Those are the ones who have been caught. Not that being caught will definitely keep those votes from being counted along with the other fraudulent ones.