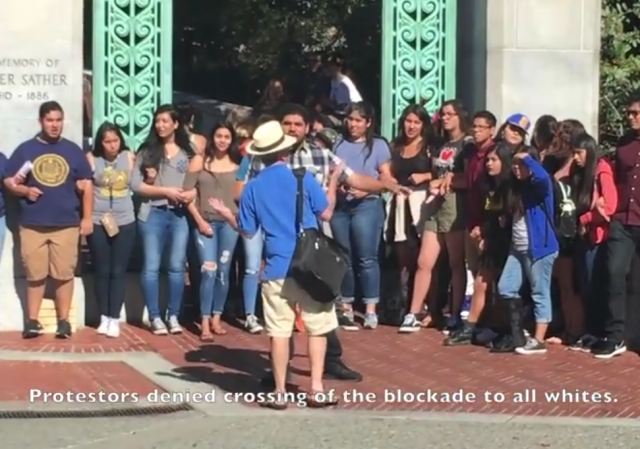 The Obama administration is turning a blind eye to racial harassment – because the victims are white students.

The harassment, which occurred at the University of California at Berkeley, was captured on video on October 21, and nationally publicized.

As the Daily Caller reported:

The Obama administration has said nothing about this, even though it has often taken note of far more trivial racial matters that concern minorities, such as Halloween costumes that allegedly “appropriate” non-white cultures. After Yale protesters sought the removal of a lecturer who defended harmless Halloween costumes such as a “blonde ­haired child’s wanting to be Mulan for a day,” and “spat on” people attending a free-speech conference, “White House press secretary Josh Earnest . . . praised the protesters.”

When white fraternity members at the University of Oklahoma were caught on video engaged in a vile racist chant, and were expelled by University President David Boren, “The White House responded” within less than a day, “praising David Boren’s actions.” It did so, even though civil-libertarians and law professors such as Eugene Volokh, Glenn Reynolds, and Erwin Chemerinsky argued the chant was protected by the First Amendment, and even though the chant occurred off campus and thus did not constitute illegal racial harassment under Title VI of the Civil Rights Act. (Federal courts have ruled that off-campus conduct does not violate laws against harassment on campus, such as Title IX, in cases such as Roe v. Saint Louis University (2014)).

But it has been silent about the racial harassment against whites at Berkeley, even though Title VI of the Civil Rights Act prohibits harassment that results in students being “excluded from participation in” any campus “program or activity.” Even if no one has complained to the government about this harassment, this is not an excuse for the Obama administration to ignore it. 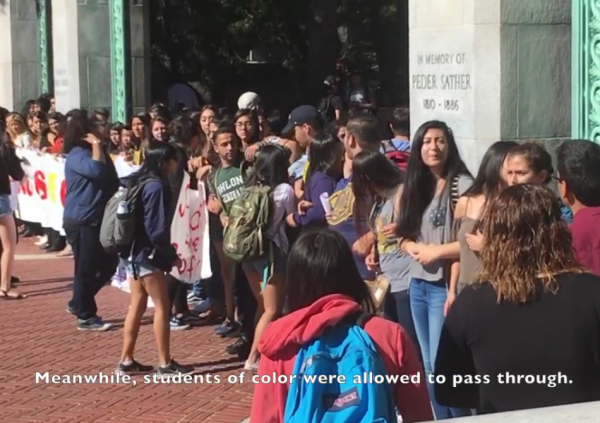 If the harassment were aimed at minorities, the Obama administration would not only denounce it, but might even begin investigating the college at which it occurred.

The Education Department’s Office for Civil Rights sometimes investigates harassment on campus based on press reports. For example, it found Michigan State University liable under Title IX for not investigating a sexual assault case faster, even though it turned out that the sexual-assault claim was false. OCR perversely faulted Michigan State for not investigating the false complaint fast enough, even though the complainant didn’t want a college investigation at all (only a criminal investigation), and it suggested the University might have to offer the false accuser academic “remedies.”

That the victims of the harassment at Berkeley were white makes no difference. Racial harassment can violate federal civil rights laws, even when the victims are white. A unanimous Supreme Court ruling in McDonald v. Santa Fe Trail Transportation Company (1976), held that all races — including whites – are covered by the civil-rights laws and constitutional guarantees of equal protection. That ruling, which allowed white employees to challenge their race-based firing, was authored by the Supreme Court’s first black justice, Thurgood Marshall. Civil rights laws forbid racial harassment and violence aimed at whites. For example, federal appeals courts have ruled that employers are liable for racial harassment they allow minorities to commit against whites, in cases like Bowen v. Missouri Department of Social Services (2002) and Huckabay v. Moore (1998).

Nor is there a “diversity” excuse for racial or sexual harassment. For example, a judge refused to dismiss a sexual harassment lawsuit brought by white men who were subject to an insulting 3-day “diversity training” seminar, in Hartman v. Pena (1995).

when the victims of racial violence are white, nothing happens.

Just like the outrageous dismissal of the New Black Panther Party case, there is a pervasive hostility in this administration to bringing cases on behalf of white victims.

By contrast, if the victim is non-white — like an undocumented immigrant from Mexico attacked in Pennsylvania — the Justice Department prosecutes; in the Pennsylvania case it obtained guilty verdicts in federal court against two white teenagers who had previously been found not guilty of hate crimes and most other charges in Pennsylvania state court.

Hans Bader practices law in Washington, D.C. After studying economics and history at the University of Virginia and law at Harvard, he practiced civil-rights, international-trade, and constitutional law. He also once worked for the Education Department’s Office for Civil Rights.

The irony is that a significant percentage of the protestors wouldn’t even be at Berkeley were it not for discrimination that worked in their favor.

^^what he said^^ Great example of irony, maybe someone can use this article in the Wikipedia page for irony?

And of course, “Justice Is Blind”–unless you’re either white or of color, in which case, not so much.

Other than that, the ethos of American citizenship remains unimpaired.

Run every [email protected] one of them over.

A small baseball bat would scatter that whimpy looking crew… all snowflakes and pajama boys.

A small band of good ol’ boys with ball bats, axe handles, and crowbars. Force the bridge. Take back the campus.

Which is why the police were on the scene.

It’s not to protect you or I from harassment or discrimination. It’s to protect the SJWs from getting their asses kicked.

They need to get their arses kicked. Take back the campus.

A good dose of pepper spray works every time.

4. publish names and pictures on social media (NOT addresses)

It’s fine to blame the Obama Administration, but it’s the school Administration who should be taking action. What am I paying tax money for?

A quick reminder: the name Janet Napolitano should ring a bell… she is the UC President. Yes, the same JP who left the “current administration” to take the UC gig…. Although not direct, the administration’s fingerprints appear to be here someplace.

So, who is doing this?

At least to my currently none-too-sharp eyes, that’s not a particularly black-looking crowd.

Civil Rights Division of DOJ…”Righting the Wrongs of the Past by Wronging the Rights of the Present.”

Trump is going to fix all of this crap

These leftist freaks don’t really care about injustice, because the injustice left a long time ago. They just want power and they’ll invent any rationalization to get it.

What about mulatto students? Such a quandary: to harass them or let them pass?

I’m only halfway serious, but it’s clear these SJW are not thinking clearly about their position.

On a broader note, these colleges and universities have ceased to be institutions of higher learning, and are instead indoctrination centers. They need to be dismantled posthaste. Let the special snowflakes, both in the student body and on the faculty, get real jobs in the real world like the rest of us ~

Why is conservative legal insurrection u upset about supposed mistreatment of liberals?

Hmm. White is the new Black.

It is important to remember when attempting to walk through a group of obnoxious jerks such as these, *not* to swing for the face when they put their hands on you to obstruct your progress. Facial bruises make for good video as the poor brainless twit rants about his mistreatment. Besides, there’s nothing vital above their necks anyway but thick ridges of bone, and you’ll hurt your hand.

I cannot say hit them in their fat little tummies and keep walking. (the modified ‘Run them down’ strategy) That would be wrong, and I could get in trouble for suggesting it.

Then I’ll suggest it. Kick their crotches in. And I’d not quail at smashing every bone in their faces. Take the campus back.

The biggest trouble, is that at Beserkeley, Americans are in short supply. Libturds rule there. They have for generations. I guess the answer is to go to a good school, where it’s safer.

Universities like Berkeley are white institutions, the product of the European Judeo Christian civilization. These people of color are at these white schools of learning, appropriating white culture, to do what?

Complain about white privilege regarding white institutions and white culture?

Let them build their own Universities, staffed by their own people of color. They don;t need to
interact with white civilization or appropriate any of white culture.

These people of color, leave their lands to have a better life, come to America to take advantage of the ‘better life’ created by whites. And then some become resentful and feel victimized because they feel disrespected and they want revert to what made their societies so bad, they left them.

These losers are like leeches, arriving to demand America take care of them, and give them stuff and services WE WORKED FOR AND WE PAY FOR.

Restricting a public right of way? Back in my youth, that would have demanded a charge of the Light Brigade no matter what the odds. Preferably fueled by alcohol. These kids simply have lost the capacity to have fun and have evolved to Brown Shirt drones.