Perhaps Obama will now reconsider the Paris Climate Accord? 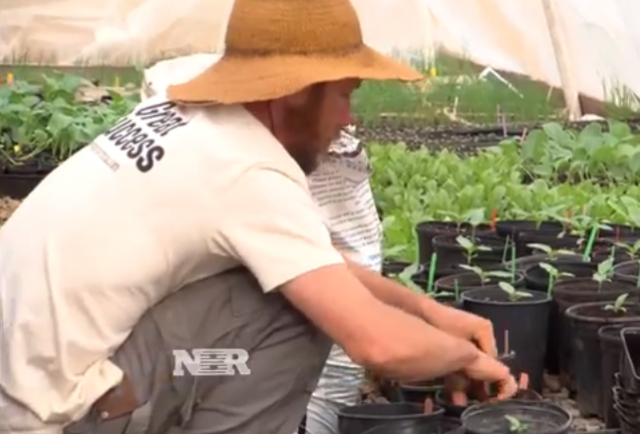 Is there anything that won’t cause climate change?

A new report indicates that a boom in legalized marijuana farming could come with a high carbon cost.

It turns out that every little joint and edible adds up. A new report finds that marijuana cultivation accounts for as much as 1 percent of energy use in states such as Colorado and Washington. The electricity needed to illuminate, dehumidify, and air-condition large growing operations may soon rival the expenditures from big data centers, which themselves emit an estimated 100 million metric tons of carbon into the atmosphere every year.

The marijuana industry’s energy use “is immense,” said the report’s author, Kelly Crandall, an analyst for EQ Research, a clean energy policy research institute. Her report found that a large grow operation can have energy expenditures of 2,000 watts per square meter because of its constant need for lighting and ventilation.

Marijuana measures are on the ballot in in 9 states, and several of these allow farming of a limited number of plants. California is one of those states:

Proposition 64 would allow adults to possess up to an ounce of pot and grow six marijuana plants at home and levy various taxes on sales that would be deposited into the state’s Marijuana Tax Fund. Most of the money collected will be spent on substance-abuse education and treatment. Some of the fund would be used to repair damage done to the environment by illegal marijuana growers. Recent polls show support for the measure at about 58 to 60 percent.

The environmental damage caused by unregulated marijuana farming in California is not trivial. Humboldt County’s pot farms are destroying the area’s redwood forest ecosystem and killing some of rare wildlife.

“The single biggest threat to our environment right now has been unregulated cannabis,” says Natalynne DeLapp, executive director of the Environmental Protection Information Center, a grassroots group that spearheaded the effort to protect the Headwaters and its wildlife. “In the last 20 years we’ve seen a massive exponential growth in cannabis production in the hills of Humboldt County, and we’ve seen really devastating environmental effects.” Growers have fragmented forests by cutting trees to build greenhouses and roads on steep hillsides, choking creeks home to endangered salmon with sediment, fertilizers, and pesticides and sucking streams dry during a record drought to irrigate marijuana crops. Once-still forests echo with the racket of hundreds of diesel generators. Rat poison and other toxic chemicals used by some growers to protect their plants are killing rare wildlife like the Pacific fisher.

“It’s just been really sad, actually, really sad to see what’s happened to the environment and a lot of work people have put into restoration efforts, to see those things unravel because people continue to bulldoze hillsides for clearings to grow more cannabis,” DeLapp says.

I wonder if President Obama would have been so quick to sign the Paris Climate accord if he knew one of the targets was marijuana?

“Is there anything that won’t cause climate change?”

Exactly. Climate Change is a vague concept with no well defined parameters and can be “caused” by anything or can “cause” anything purely by assertion regardless of how absurd the claim or the contrary evidence. It is as “anti-science” as anything can possibly be. It is pure politics. It is the universal solvent of a leftist.

Who needs marijuana when bottled tea has hallucinogenic properties– with the right label attached to it, of course. If you buy it, Trump becomes president.

Oh, noes! If you’re an environmentalist, and a stoner, what do you do?

I’m guessing the option of just staying stoned all the time, and being too mellowed-out to care about climate change, will be a popular solution. 😀

Not for nothin’ but… the biggest and most dangerous aspect of unregulated marijuana production is the installation and use of standalone CO2 generators. This fact took me by surprise. I really did not know that marijuana production sites were blowing up all over the country prior to the last week or so. The most recent case brought to my attention was back in my hometown of NYC in the Bronx.

It is shameful that I am LMAO but this is a serious problem and one that is caused and to be expected. I mean marijuana production entrepreneurs avoiding the use of the stable utility of natural gas in urban centers so that they can avoid being tracked through high use billing and targeting by law enforcement have gone to ‘off grid’ use of gas cylinders like you would use for your BBQ or better. If your neighbor has a 12 buck a month gas bill and you have a $6000 a month gas bill suspicions are understandable. The problem is that Dope Farmers are not the best DIYers and pipe fitters. It seems that urban dope farmers across the USA and from what I have discovered the Western world(here in Europe too) are careless and lacking in basic plumbing skills with explosive and deadly consequences. Who would have thunk this eventuality?

can have energy expenditures of 2,000 watts per square meter

Gotta love it when an activist who wouldn’t know a bolt from a volt tries to go all quantitative and technical. “Watts” is a measure of power, not energy. (The two are, of course, related—but so were the Gabor sisters; that hardly made them the same.)

Just as a point of interest, I calculate solar flux (i.e., sunlight reaching the ground) at the latitude of Los Angeles to be 1,135 watts per square meter (annual average, at local noon, and neglecting smog). Farmers normally get that for free, unless they’re driven underground by law; then they have to use “grow” lights.

The title of this article is the wrong question to ask. Any scientist worth their salt will tell you that virtually anything we do will affect the climate. The question that does need to be asked is whether or not the effects are significant or not, how significant is defined, and what will be the cost of doing nothing (lives, money, lower quality of life, etc.) as opposed to the cost of “fixing” it (whatever that means).
>
So far, Obama’s plans to “fix” global warming amounts to many trillions of dollars and even using the wildly over exaggerated climate models, the net result we would “see” 100 years later would be too small to measure.
>
Here’s a reality check. Climate change is nothing more than a problem that is being hyped such that it can be used to either justify all sorts of things that could otherwise never be justified or to take the attention off of any real problem this administration does not want to talk about.