“The rule of law should trump political agendas,” 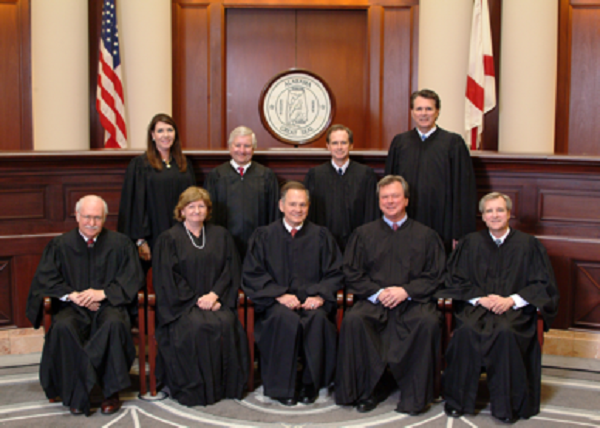 Alabama was at the center of much national discussion concerning same-sex “marriage,” and at the center of much of that was Alabama Chief Justice Roy Moore.  Moore first came to national attention regarding a Ten Commandments monument and was removed from office as a result.  He ran for and won reelection and now has again been suspended for the entirety of his remaining term.  This time, however, he will be unable to run for reelection because he is over the Alabama state age requirement.

It’s the second time Moore has been removed from the chief justice job for defiance of federal courts – the first time in 2003 for refusing to remove a Ten Commandments monument from the state judicial building.

The Alabama Court of the Judiciary (COJ) issued the order Friday suspending Moore from the bench for the remainder of his term after an unanimous vote of the nine-member court.

“For these violations, Chief Justice Moore is hereby suspended from office without pay for the remainder of his term. This suspension is effective immediately,” the order stated.

The court found him guilty of all six charges of violation of the canons of judicial ethics. Moore’s term is to end in 2019, but because of his age, 69, he cannot run for the office again.

Via ABC 3340, the counts on which Moore was found guilty are as follows:

Moore was also taxed by the court for the costs of the proceedings.

Moore’s term ends January 2019. The Alabama Supreme Court will continue to act with eight members in his absence.

Interestingly, as Townhall explains, the entire Alabama brouhaha over gay marriage began as an adoption case and was pushed forward by an “activist judge.”

Most of the media is blaming the current chaos in Alabama over whether same-sex couples will or will not be issued marriage licenses on Judge Roy Moore, Chief Justice of the Alabama Supreme Court.

However, it really should be laid at the feet of U.S. District Court Judge Callie V. S. Granade (pronounced, according to National Public Radio, like “grenade”). It was Granade’s January 23 decision to blow up Alabama’s one-man-one-woman definition of marriage which set events in motion.

. . . . Another thing startling about the case—which makes her judicial activism even more obvious—is that it did not begin as a marriage case at all. It was actually an adoption case, in which one lesbian sought to adopt her partner’s child, but was prevented from doing so by Alabama’s law limiting second-parent adoption to a “spouse.” So even if Judge Granade believed the plaintiffs’ had suffered an unconstitutional injury, she could have remedied it by ordering Alabama to permit the adoption of this one child. She might even have struck down the state’s adoption law. Instead, she used this adoption case as a wedge in an attempt to redefine marriage for the entire state.

Moore’s full statement on the ruling:

This decision clearly reflects the corrupt nature of our political and legal system at the highest level.

After the Attorney General of Alabama declined to prosecute this case, the JIC employed the former legal director of the Southern Poverty Law Center (SPLC) which filed the charges against me, at a cost of up to $75,000.00 to the taxpayers of Alabama.

During the trial which lasted approximately four hours, the JIC produced no witnesses, no affidavits, and no evidence to meet their burden of proving by “clear and convincing” evidence that the Administrative order of January 6, 2016 violated the Canons of Judicial Ethics.

This was a politically motivated effort by radical homosexual and transgender groups to remove me as Chief Justice of the Supreme Court because of outspoken opposition to their immoral agenda.

This opinion violates not only the legal standards of evidence but also the rule of law which states that no judge can be removed from office except by unanimous vote.

You can watch the closing arguments in the case here:

Moore will be filing an appeal.

Mat Staver, the attorney representing now-suspended Alabama Chief Justice Roy Moore, slammed as a “miscarriage of justice” a decision Friday by the Alabama Court of the Judiciary to suspend his client for the rest of his term.

. . . .  Staver, who is the founder and chairman of Liberty Counsel, promised to appeal the ruling to the Alabama Supreme Court. “This case is far from over,” he said.

“The rule of law should trump political agendas,” Staver stated. “Sadly, today that is not the case. What this decision tells us today is that Montgomery has a long way to go to weed out abuse of political power and restore the rule of law.”

Staver contends the ACJ did not follow its own rules in determining Moore’s fate.

“To suspend Chief Justice Moore for the rest of his term is the same as removal. The COJ lacked the unanimous votes to remove the Chief, so the majority instead chose to ignore the law and the rules,” Staver said. “There is no meaningful difference between suspension for the remaining of the term and removal from office.”

WSFA also reports that “President Kayla Moore of the Foundation for Moral Law, a Montgomery-based legal foundation dedicated to strict construction of the constitution according to its framers released the following statement”:

“The ruling today regarding our founder Chief Justice Roy Moore is nothing more than persecution of a Christian official. It is an effort to silence by threat of removal a liberal agenda. There were professionals in that courtroom–doctors, lawyers, judges, and more who all agreed that Chief Justice Moore was completely correct. Yet, the Court of the Judiciary suspended Chief Justice Moore without pay for the remainder of his term and is making him pay all expenses of trial! This has never happened before.This small unelected group of people, mostly Democrats, have overturned an election of the people of Alabama. All these efforts are being led by a guy who dresses up like a woman and prances around on the stage. The good people of Alabama have had their votes taken away from them once again.”

“The Alabama Republican Party is highly disappointed in the Alabama Court of Judiciary’s decision to suspend Judge Roy Moore from office. This group of individuals are not accountable to the voters of Alabama. Their charge as a body is to address and make decisions on corruption cases involving judges in Alabama. At no time has this case been about corruption.”

“Judge Moore was elected, twice, by the citizens of our state. In light of this, two groups who are unaccountable to the voters have overstepped boundaries in suspending a statewide elected judge. On May 21, 2016, the Alabama Republican Party passed a resolution strongly opposing the removal of Chief Justice Moore.”

“On August 27, 2016, the Alabama Republican Party passed a resolution calling for the Alabama executive, legislative and judicial branches of government to enact and implement a law for the election of all members of the Judicial Inquiry Commission by vote of the people of Alabama.”

“We stand by our resolution of support for Judge Moore and our resolution to call for a vote of the people regarding the election of all members to the Judicial Inquiry Commission.”

The Alabama Court of the Judiciary (COJ) issued the order Friday suspending Moore from the bench for the remainder of his term after an unanimous vote of the nine-member court.

The COJ lacked the unanimous votes to remove the Chief, so the majority instead chose to ignore the law and the rules,” Staver said.

So, which is it; unanimous or not?

If I am reading it correctly, they lacked the unanimous vote necessary to REMOVE him from office. Probably because a couple of them knew that there would be massive fallout for removing him.

So instead they SUSPENDED him by unanimous vote. Technically he’s still on the court.

IOW they made up some new law on the fly?

Suggestion, Alabama – get rid of the unelected COJ

Because nothing says “politically motivated” like hiring the former legal director of the SPLC, a far left radical group with an anti-American agenda.

I disagreed with Moore on the 10 commandments case but he’s spot on here.

I’m certain he was right on the 10 Commandments case.

It must be sweet to be a radical leftist, so you can take the biggest, heaviest wrench you can find, even have a special one machined for you, and drop it into the whole of society, and watch society’s gears get chewed up to the point of malfunction.

If you thin the “SPLC is a far left radical group with an anti-American agenda” then you must be a far right radical who believes in white supremacy.

There is no sense arguing with someone who thinks fighting the KKK and neo-nazi groups isn’t god’s work. But I thought I would offer my dissent.

The problem with the SPLC is that it does not limit its denunciations and listings of Americans as “extremists” to white supremacist groups. As we’ve covered here at LI, they include people for simply being conservative. For goodness’ sake, for a time (and until LI broke the story), it had Dr. Ben Carson on its list of “extremists.” They also had Rand Paul on an “extremists” list.

How do you defend these choices since I’m guessing you aren’t about to argue that Dr. Paul is a neo-nazi or that Dr. Carson is a white supremacist?

SPLC used to do important work, but now they simply call everyone who holds conservative views an “extremist.” You don’t have to be a “far right radical who believes in white supremacy” to see this.

OnlyRightDissentAllowed in reply to Fuzzy Slippers. | October 3, 2016 at 2:21 pm

After receiving your comment, I went to their site. I don’t see what you are complaining about. It is called the SPLaw Center; not the SPHate Center.

Especially on the 10 commandments, Moore did not follow the Canon of Ethics. Even his conduct when he installed the ‘monument’ is evidence of that. He, literally, did it in the dead of night. That is evidence of a guilty mind.

The irony is that the commandments are not the same in each of the Abrahamic religions. They certain do not translate unequivocally into English.

I was more circumspect on the latest example. I am not sure his ruling rose to a level requiring him to be suspended. A means was quickly found to circumvent him. Those who were delayed or inconvenienced might not agree.

But it clear that his decisions are infused with what he believes to be a ‘higher law’. Our constitution disagrees; as should anyone – even if you are a devout Christian – because there are disagreements between the sects. On which doctrine does he base his decisions?

There have been complaints that courts might start to rule based on ‘Sharia’ Law. How is ruling based on ‘Christian’ Law any different?

After the coming Great Reset the country will need men like him.

Can we toss members of the courts who have violated Heller?

They probably could be impeached. Who do you have in mind or was your comment abstract? I am not asking for hyperbole. What government official has order any other public official to ignore or violate the ruling?