Does Mika Want to Ban Beauty Pageants? What About a Woman’s Right to Choose? 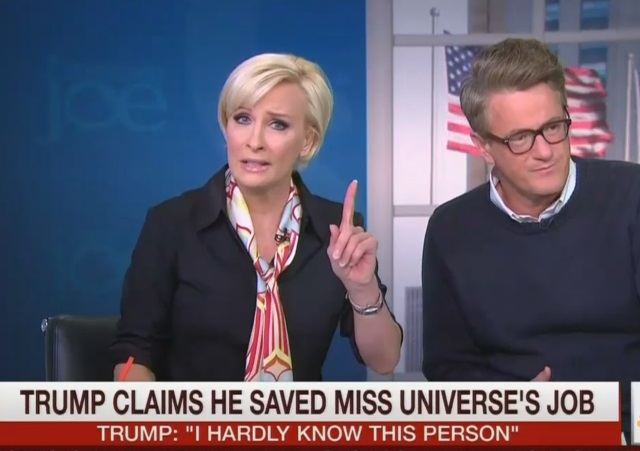 Mika Brzezinski went on an epic feminist rant on today’s Morning Joe, condemning not just Donald Trump for his comments about a former Miss Universe, but raging against the entire beauty pageant culture in which women are judged on their . . beauty.

Mika summed up her intellectual argument this way: “you stupid men.” Brzezinski considers it unfair that beauty pageant contestants are expected to be trim, whereas men like Trump and Newt Gingrich “can walk around as rotund as all get out.” But if those guys had entered the Mr. Universe contest, every inch of their oiled bodies would come under the microscope. But they haven’t. Thank God. And if a woman in exercise of her free will enters a beauty contest, that’s her choice.

Tune in tomorrow as Mika Brzezinski explains why those mean, sexist laws of gravity must be repealed.

Note: this is the second consecutive day in which Brzezinki’s been on the feminist warpath over the Miss Universe kerfuffle. Yesterday, she suggested that Trump “bow down” before the strength of women.

MIKA BRZEZINSKI: It’s a beauty contest, right? You can’t actually have any weight on your body for a beauty contest because that wouldn’t be beautiful. Think about that.

So people like Donald Trump and Newt Gingrich and men can walk around just rotund as all get out and it’s not an issue. But women in order to be beautiful, you have to be 117 pounds.

What? I’m sorry: can someone tell me what year we’re in here? Is it 2016? I think we’re back in the ’70s with those hideous pageants, which by the way we need to talk about at some point. Somebody who runs beauty pageants, you have to think about how they think about women.

Look at those beauty pageants: really look at them. Young women walking around in bikinis getting graded on how they look. I can’t believe we still do these things. But do we want someone who ran beauty pageants, and like still thinks it’s okay to talk about gaining weight being a problem.

Do we really want that person in the White House hiring women? I don’t think he’ll hire any women unless they’re 10s. In his view. Which is 117 pounds and starving and covered in plastic. Lots of lip gloss. It’s disgusting! It’s perverted.

. . . That silly story. Got anything to say about it. It’s a serious story. You stupid men. [Nervous laughter among the male panel members.]

JOE SCARBOROUGH: Claire McCaskill actually took a swing at it yesterday. She tweeted this: “The Democratic women senators have talked and we’re concerned about Donald’s weight. Campaign stress? We think a public daily weigh-in is called for.” We’ll be right back. And Mika, Mika hasn’t really talked about this much, but she’s got a lot to say and she’s going to share that with you when we return on Morning Joe.

Most of us men, I would say 99%, don’t give a rat’s butt about these beauty pageants.
Beauty pageants are a women’s thing.

Beauty pageants are a thing of very narrow subcultural appeal. Women don’t care for them either.

But she’s OK with young girls literally whoring themselves out for pr0n, amirite?

She is okay with making that incredibly sexist statement.

I wonder just how long Mika thinks she would keep her job if she gained 75 pounds and wasn’t reasonably pretty?

Or how would she react if she was fired and replaced with a fat, elderly woman who has acne and spits when she talks?

I am sure that it was Trump’s fat shaming that turned the woman into a Murder Accomplice and forced her to threaten to murder the trial judge.

Obviously Trump’s words forced her into a life of violent crime.

Look at what he actually said about her.

As Dan Aykroyd used to phrase it, “Jane, you ignorant slut.”

“Psst, Mika, this is just between the two of us, so I want to keep this kinda quiet. The only reason you’re on TV to begin with is because you’re sorta attractive. The only reason. So you might try to remember.”

If a weigh-in for The Donald is fair, then by all means, let’s have equality of the sexes and weigh Cankles, too. Which one weighs more? I’d almost be willing to bet on it.

Does her weigh-in include all the medical apparatus hidden under her formless coat?

Zika is just throwing out troll bait. Compare this towering beauty pageant issue to the enabling of a sexual predator and the persecution of his victims and lets see which floats to the top in an open forum. How do these noise makers get to have a voice on national television? Never mind.

I used to watch Morning Joe to see what the opposition was had to say. No more. Mika has become more vocal … and that turns out to be a very bad thing. She does indeed come across as neurotic and, really, not too smart. I stopped watching when she went on & on earlier in the year about how in the world Paul Ryan would ever be able to explain to his children his support of Trump. I thought that the most inane comment ever. Now I occasionally catch With All Due Respect to hear what Mark Halperin has to say.

Mika didn’t have a problem with sexualizing her body for a story.

True but that was in Salon see, so it doesn’t count.

I think the original article & picture was in Vanity Fair. When I was looking for a link to the picture, I found the Salon article which was originally in another location (Bagnews Notes? Never heard of it.)

I assume that Vanity Fair has degenerated as well but its not unlikely to be outright commie-compromised like Salon. Megyn looks like most women who choose to spell their names wrong, maybe. Under her “journalism” she wants to be known for naughty. She has those middle-distance-fixed eyeballs, kind like Angelina Jolie, that seem lot lack the inability to completely direct their gaze outward. Doll eyes.

Let me know when Mika B appears on TV with less than a metric ton of eye concealer makeup. You know because some man, definitely not her, has decided she must wear a lot of make up

Mika’s father was Carter’s National Security Advisor Zbigniew Brzezinski. Her mother was a famous sculptor and also the grandniece of former Czechoslovakian president Edvard Beneš. Mika, of course, made it big in cable TV news entorely on her own merits.

How DARE you cast aspersions! She’s American royalty, for crissakes, that class of super-citizens who haven’t got shit all over them like the rest of us peasants.

No brighter than her father.

So, we should strive to be overweight, unhealthy, and dysfunctional?

The process of normalization has been hijacked with inferior motives.

What was going on with Hillary’s podium at the debate?

Have to admit that it’s pretty funny when an intellectual black hole like Mika says something like “think about that.” Kind of like Albert Einstein walking into a biker bar and saying “I’ve got a hundred bucks says I can whip any man in the house.”

Einstein was a black belt, but only on the quantum level – of no use in a biker bar.

If “being a liberal scold” was a talent, then Mika really should participate because she’ll win that part of it for sure. I’ve seen this behavior from liberals a thousand times – sure you have free choice, but if you don’t make the choices they agree with you’re racist or stupid and should be coerced in some way and then forced to recant and spout the party line.

And how courageous of Mika to speak out against America beauty pageants and to blame men for them. Any word of when she’ll denounce Indian arranged marriage, Islam’s rape laws, Africa’s female circumcision practices, misogyny in hip hop music and culture, or sexual harassment by – ahem – prominent Democrats? Any time now I’m sure.

I”m surprised you picked up this story at all. It, and everything about that particular Miss USA, is obviously a red herring.

Keeping the focus off hateful hitlery. When she talks, people don’t like her and the polls show it.
As for mika, live the dream mika, shop at Walmart for your clothes and makeup. You just told us looks aren’t important, walk your talk.

Mika is the sort of woman who runs men down by extolling how wonderful women are, and then expects a man to help her out when she is distress.

Remember the crew men leaving the “Costa Concordia” before the passengers, particularly female passengers, got in the lifeboats? Some had commented on women’s lib. They can take care of themselves. Colonel Jessup was right, these are the sort for whom honor and integrity are words, punch lines at cocktail parties, who deep down don’t want to know what rough men do to defend them, but want and need that defense.

After Blacks, single women, single moms, were the most stalwart in voting for big-government barack. Women who despise men.