‘I Love It’ That Hillary ‘Wiped the Floor with Him’ 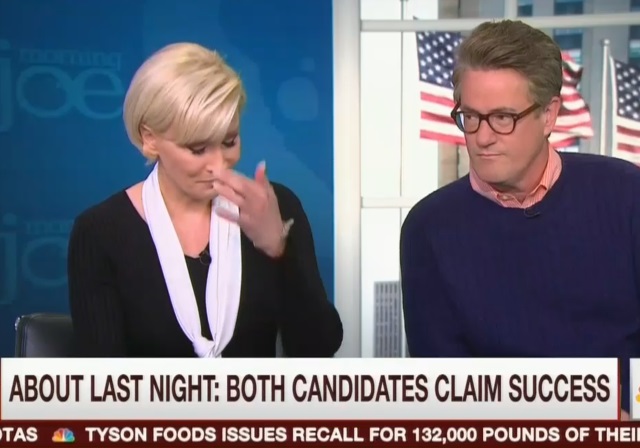 Mika is Woman: hear her roar! Mika Brzezinski had a suggestion for Donald Trump on today’s Morning Joe. After Hillary, in the debate, “cleaned his clock” and “wiped the floor” with him, Mika suggested that Trump might want to “bow down” in acknowledgement of the strength of women.

Mika was still furious after an opening segment in which she and the other panelists trashed Trump for having, among other things, “weight shamed” a former Miss Universe. Admitted Mika “just to be shallow, I have to say given all his comments about women . . . I’m really glad that a woman cleaned his clock. I’m really glad that she wiped the floor with him. I love it. I love it.”

Can you imagine what would befall a male pundit who said he “loved it” that a man “wiped the floor” with a woman or suggested that women should “bow down” to men?

Note: Mika’s undoubtedly right that women are very strong in a variety of ways. Just one small example comes from the boot-camp type classes I’ve been taking in which a number of the women astound me with their strength and endurance, far beyond my own. Still, there was some irony in the fact that, as readers will see in the screencap and video, Mika was overcome by emotion and had to stop to compose herself as she began her tirade against Trump.

He’s going to have to reassess the strength of a woman. He really is. His whole like idea of what a woman is, how he objectifies them, and says really nasty things about them over time, he needs to understand that perhaps, actually, he might want to bow down and realize that it was a woman that brought him into this world.

I guess Mika hasn’t heard that a woman is running Trump’s campaign.

I see that somebody has gotten Mika back on the script.

CNN referred to former Miss Universe as “size of the universe” in 1997
http://archive.is/jHaEh

Read what The Donald had to say, and how far off the Democrats are in their current description of what he said.

” But Trump, as co-owner of rights to the pageant, said he would never let that happen. “We had a choice of: termination or do this,” he said. “We wanted to do this.”
situps

The pageant’s meaning of “do this” was for Machado to get her weight down to about 130 pounds.

Interesting. This is such a non-story. Jeanne Moos is the author of the story. She is such a liberal hack, too. I wonder if she had a role in bringing this out. This could make CNN look bad too. Trump really needs to point out the distraction. He actually was helping out the “Miss piggy” so he did not have to fire her for not taking care of her self. 60 lb. weight gain in a year is a serious problem.

The Grandma campaign is getting a lot of free press over the fat shaming deal. I happened to let the TV rest on TMZ last night and the lead story was about this and what a predator Trump was for pointing out the chunking up of this Machado. It dwarfs Bills escapades by multiples. Its not even notable other than I’m sure its resonating among women voters who just can’t lose that last 40 lbs. If somebody can help me understand female priorities, I’m all ears.

What I find so fascinating is that there is a lot more focus on Trump than Clinton….as if they are trying to make us all forget exactly who is up against Trump.

Oh, good. Mika’s given herself a good overnight “community organizing” session, and now has her thoughts safely removed from reality and back on the Liberal straight-and-narrow (with emphasis on the “narrow”). Phew, yesterday was a close call! Now she has an imaginary handle she can use to pummel Trump, and she’s back to wearing a bland scarf; so she must be feeling much better.

For the rest of us, well, scratch a liberal, and you’ll find a … surprise, actually; it might be a racist, or it might be a sexist.

First of all she didn’t gain five pounds she gained about 60.

At one point she did the famous star does “fat watchers” type ads.

Second She has a very checkered past apparently with some tie to drug lords. http://www.dailymail.co.uk/news/article-3810484/Miss-Universe-fat-shamed-Donald-Trump-accused-threatening-kill-judge-accomplice-MURDER-native-Venezuela.html

Yeah I know the daily mail but they have some quotes from AP.

I wish Trump would tweet something like, “Speaking of fat shaming, I seem to remember some nude statues of a presidential candidate going around.”

When MSNBC fired Don Imus over the “nappy-headed hos” joke on the Rutgers’ women’s basketball squad, I stopped watching. When they hired Keith Olberman, I deleted the channel from my remote control lists.

I have never regretted it, or come close to it.

The only thing I want to hear from Joe Scarborough is a full and honest explanation of why he resigned his House seat only a couple of months into a new term, and the nature of his relationship with the young female aide who died in his field office. Until he does that, I have no interest in hearing anything else from him.

The only thing I want to hear from Mika Brzezinski is, “Goodbye.”

We took the next step and cancelled cable TV many years ago and have not regretted it one bit. About 2 or 3 times a year we break out our HDTV antenna to pick up a local channel for a game or whatever. The picture quality exceeds what we got on cable. The best part is we are not paying close to $2k a year to fund progressive agendas.

Clearly this propagandist was taken out to the woodshed last night and given some re-education.

They’re not journalists, they’re unpaid (by Hillary) campaign spokesmen. They don’t work for a news organization, because they simply spew out whatever the writers provide them and decree that the stuff they said is true. It’s not.

Only Hillary voters might smile when they see these commercials, the rest of the voters just see that the talking heads are phonies. Again.

I wonder what the dynamic is behind the support of Mike-esque women for Grandma. I get the glass ceiling thing but are they just white-washing her treatment of the victims Bill’s pathological adventures or do they dispute that they were victims? If we’re talking a feminist agenda here that’s a pretty massive, hypocritical, blind spot.

BTW wasn’t there a famous Monica that reporters were going around describing as fat?

Talk about someone doing drugs!
This is from yesterday.

Mika needs to make up her mind.

Well, there it is: Brzezinski is a sexist pig.

next debate: Hillary brings out another example of Trump’s misogyny by reffering to a interviewing where he jokingly referred to Linsey Lohan as a “ho”.

Why do we give any attention to these 2 fools, Mika and Joe?

I don’t understand it at all.

Mark says it’s more or less a daily PSA on how the irrational liberal mind works. If none of it makes any sense to you you’re probably okay.

According to CNBC, Time, and a number of other polls, Trump beat Hillary solidly in the debate.
But libtards never let facts get in the way of their agenda, so why start now?

“Bow down to strength of women”, huh. Mika may be a female chauvinist. Normal people do not subordinate others, especially by class (e.g. “color of skin”).

Well Mika, ANYBODY can be chipper and on-point for 90 minutes if you give them enough dopamine and enough methamphetamine.

I would not be surprised to know that Clinton was on BOTH. She had her micro-seizure shake in the middle of the debate when Trump was on form, and she was blinking so fast that I thought she must have been confused that she had become a turn signal.

Let’s see how Clinton could do without her handlers for oh, say 24 hours. THAT would be telling to see exactly how far she would degrade when she didn’t have her staff waiting on her hand-and-foot, and making sure she kept her meds straight.