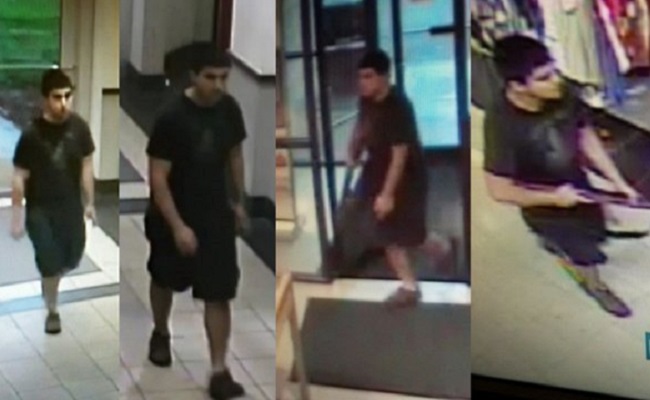 Yesterday, we covered the Seattle-area mall shooting, including a personal response from LI’s A. F. Branco.  At that time, law enforcement was looking for the suspect.

The suspect, identified as Arcan Cetin, was arrested Saturday evening as he walked along a street in Oak Harbor. Cetin will be turned over to the Skagit County Sheriff’s Office, according to Island County authorities.

Cetin was identified as a suspect from tips and after police examined surveillance video from the Burlington mall and saw a car connected to him, Mount Vernon Police Department Lt. Chris Cammock said during a news conference late Saturday night. Skagit County authorities alerted the Island County Sheriff’s Office, which arrested Cetin around 6:30 p.m., he said.
Cammock said Cetin has not been charged. He will be booked into the Skagit County Jail, he said.

He is expected to appear in Skagit County District Court on Monday.

Cetin, born in Turkey and reportedly a legal permanent resident, has a criminal record.

Skagit County court records show Cetin has a criminal record that included three domestic-violence assault charges in both Burlington and Island County, with the victim identified as Cetin’s stepfather. He also was arrested for drunken driving.

Island County District Court records show that Cetin was told by a judge on Dec. 29 that he was not to possess a firearm.

. . . .  A couple years ago, Marty Baldwin said he allowed the suspected gunman, who was homeless at the time, to move in with him and his wife. But Baldwin kicked him out a few months later after learning the younger man was using and selling drugs, he said

Baldwin said he called 911 Friday night after recognizing the man he knew as “Frankie” on TV.

. . . . Police said the suspect appeared to be a Hispanic male in his late teens to mid-20s with a close-shaved haircut. He used a long gun similar to a hunting rifle, Francis said.

Cammock said he is a legal permanent resident of the U.S.

While his motivation for the shootings are still unclear, law enforcement officials “intend to find out.”

“I don’t know what his motivations were,” said  Cammock, commander of the Skagit Multi-Agency Response Team (SMART), said at a Saturday morning news conference. “But I certainly intend to find out.”

. . . . Cammock said detectives do not know whether Cetin had a connection with any of the victims.

According to Reuters, Cetin was unarmed and “zombie like” at the time of his arrest.

Police told reporters nothing is yet known about Cetin’s possible motive but they were not ruling out anything, including terrorism. They described his demeanor when apprehended as “zombie like,” and said he was unarmed.

Surveillance video from the mall in Burlington, around 65 miles (105 km) north of Seattle, showed the gunman walked into the shopping center without a rifle, but later caught him brandishing the weapon, Mount Vernon Police Lieutenant Chris Cammock said

The rifle was later recovered at the mall, said Cammock, commander of the Skagit County Multi-Agency Response Team.

Authorities have not identified the victims, but local media said they ranged in age from mid-teens to mid-90s, and included a mother and her daughter.

One of those darned Turkish Hispanics.

And I bet he’s Presbyterian.

I said the exact same thing when I read that.

This is the thing about profiling…
When I first saw the pictures from surveillance video, I right away thought he was Middle-Eastern. But then I read that authorities described him as “Hispanic” and they said the motivation was not clear, and I was, like, “Got it wrong this time”.
Well, they don’t speak Spanish in Turkey, do they?

I was wondering about the “Hispanic” label yesterday because that’s not a race; unless he said something in Spanish at the time of the attack there’s no way that you can establish that unless you’re going by what you think a Hispanic looks like.

Actually yes, there is a significant Spanish-speaking population in Turkey — thousands of Jewish refugees from Spain settled in Turkey in the 16th century, and their descendants have maintained their language all the way through the 20th century. Most of them have emigrated to Israel or the USA, but there are still a fair number left.

Maybe so, but in this case “Hispanic” just meant “tan without noticeable black African features”, strictly for ID purposes. Naturally, some people took it as proof he wasn’t Muslim, for political reasons. Even so, I was sure right away he was middle eastern, and I told one of my Mexican friends that. I was right, surprise surprise!

Actually, NO.
Next time you consult Wikipedia, make sure to verify that you understood what you read.
The population you referred to is not “significant” but even if it were, they don’t speak Spanish. They speak Ladino, which is a dialect that derives from Spanish, but it has significant orthographic, phonological and grammatical differences.

But let’s ASSume, for the sake of those like you who don’t know the difference, that they indeed speak Spanish. You completely ignored the point of my comment. Nobody calls people from Turkey “Hispanics”.
Only you and Obama.

1. What on earth makes you think I consulted Wikipedia?
2. The Sefardi population of Turkey is still significant, and was even more so until the post-war emigration.
3. Ladino is Spanish. Its differences from the Spanish spoken today in Madrid are no more significant than the differences between, say, New Brunswick French and Tahitian French, or between Indian English and Yorkshire English.

Ladino is NOT Spanish.

And I inferred that you looked it up in wikipedia because of the simpleton “Wikipedia Warrior” tone of your comment. If you found it somewhere else, same difference. Ladino is NOT Spanish. But I could understand that to YOU, it seems the same. After all, you’re not an expert in neither Spanish not Ladino. Are you?

Ladino is Spanish. The name “ladino” is a modern invention; its speakers have always called it simply Español. It is closer to, for instance, Argentinian Spanish, or even Valencian Spanish, than Yorkshire English is to London English, or than Black American English is to Minnesota English.

Oh, and your question, you ass, was “Well, they don’t speak Spanish in Turkey, do they?”. The answer is yes, they do.

1) You’re the one who called me an ass.
2) You lied. All I did is point out your blatant and deliberate lie. You asked “Well, they don’t speak Spanish in Turkey, do they?”. I answered that they do, and you went off into an insane fit. It is a fact that they do speak Spanish in Turkey, whether you like it or not.
3) You are profoundly ignorant on all topics, and have never made a positive contribution to this blog. Why don’t you just go away?

He could be a White Hispanic type like George Zimmerman.

Would he be a Turquia?

Cetin, who immigrated to the US from Turkey….

–>In February, Governor Jay Inslee instituted a moratorium on executions in Washington, highlighting both the costs and the arbitrariness of the death penalty, noting, “Equal justice under the law is the state’s primary responsibility. And in death penalty cases, I’m not convinced equal justice is being served.<–

time for an impeachment of the gov, if he does not seek the death penalty for this "Amish" perp.

This is Washington. Cetin will be paroled within a year or two, and probably will have a statue raised in his honor outside Pike Place Market.

The White House just released a statement. Global warming and the consequent rise in the oceans has caused the Anatolian Peninsula to float away; it is now attached to Tiera del Fuego, thus making this the first instance of Turko-Hispanic jihadi.

And the NRA is responsible for continental drift.

Looks like a number of comments were selectively hammered, porque?

Appreciate the excellent reporting by Fuzzy Slippers. Thank you very much.

Sure, but the apparently arbitrary comment deletions are troubling.

I don’t know what you mean, Jack. No comments have been deleted in this thread.

Was almost certain I made a relatively obnoxious reference to “me gusto mucho Allah” or something equally juvenile here this morning but it was early. If the error is mine, apology offered.

Oh, I saw that somewhere, and thought it was funny. I’ll see if I can find it.

Mystery solved. It’s on the other post about this: https://legalinsurrection.com/2016/09/seattle-shooting-leaves-five-dead-fbi-no-evidence-of-terrorism/#comment-700992

Well I begged for that one didn’t I? Talk about wearing senility on your sleeve. Sorry and thanks for resolving. Faith is restored.

No worries, Jack, glad your faith is restored. 🙂

On a lighter note, the comment that I posted that turned out to be a false alarm got an up vote and a down vote. Reminds me of the Monty Python bit about the People’s Front of Judea.
https://www.youtube.com/watch?v=WboggjN_G-4

“Cammock said detectives do not know whether Cetin had a connection with any of the victims.”
I’ve read a news report that the killer’s neighbor said that one of the victims had dated the killer and that another was the girl’s mother.

I suppose that makes this an honor killing.

I can’t remember — are we supposed to condemn him for that, because stalking and killing women is bad, or honor his right to do that, because all third-world cultures are just as valid as our own.

I think that the correct answer is “both”. He is a serial killer of color first and foremost and that puts him in the bonus round from the get go.

So evidently this actor was a Ted Bundy fan, at least according to one article. Given the events in Orlando, the recent revelations re the NY bomber, and not this bloke, maybe a question that needs to be asked is just how many muslims have deep issues related to sexual identity and are those issues fueling the rage behind these killings. There is no religious ecstasy here, only the sadism many of these people are legendary for.

He’s a Turkish Muslim who does not speak Spanish but looks Hispanic?

White Hispanic? I love how leftists have been given the keys to racial labels and definitions.

Had he been half a shade lighter they would have been calling him a white Caucasian, like the Tsarnaevs.

Three domestic assaults plus drunk driving. Good thing he wasn’t kicked outta the country or nothing, mighta hurt his self-esteem.

I’ll draw fire for it but this kind of incident is a feature of muslim populations world wide, an acting out of cruel and sadistic impulses born of a need for subjugation. I’d love to see how many of them would do on Rorschach tests. Within their culture, its is a feature. Outside of it, its pathological. It isn’t born of Islam, rather Islam was the faith of choice because it includes enabling dogma permitting and encouraging domination by way of cruelty.

Rather than solemnly intoning there is no evidence that it was related to islamic terrorism, for once they would be honest and say the facts seem to point to islamic terrorism. It is just a public statement, proof is not required beyond the shadow of a doubt.

“Motivation still unknown”?
Uhhhh… If the definition of motivation is the general desire or willingness of someone to do something, then his motivation was to kill people. He succeeded.