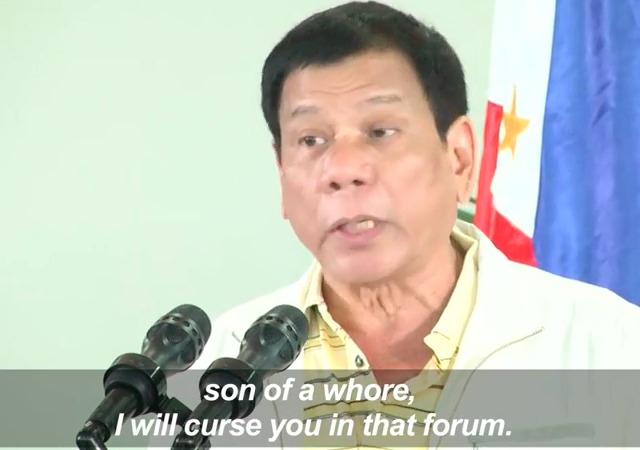 President Barack Obama will meet with South Korean President Park Geun-Hye on Tuesday instead of Philippine President Rodrigo Duterte after he referred to Obama as a “son of a whore.” National Post reports:

In his typical foul-mouthed style, Duterte responded: “I am a president of a sovereign state and we have long ceased to be a colony. I do not have any master except the Filipino people, nobody but nobody. You must be respectful. Do not just throw questions. Putang ina I will swear at you in that forum,” he said, using the Tagalog phrase for son of a bitch. Some translations have suggested the phrase is closer to “son of a whore.”

“Clearly, he’s a colorful guy,” Obama said. “What I’ve instructed my team to do is talk to their Philippine counterparts to find out is this in fact a time where we can have some constructive, productive conversations.”

“Obama will not be holding a bilateral meeting with President Duterte of the Philippines this afternoon,” Price said in a statement. “Instead he will meet with President Park of the Republican of Korea.”

Obama wanted to speak with Duterte in Laos at a meeting of Southeast Asian leaders about his war on drugs. Since Duterte took office, officials have killed almost 2,000 suspected drug dealers. Photos from the media have shown these people “often bound hand and foot, shirts soaked in blood, their faces sometimes covered in duct tape, wearing crude signs proclaiming their alleged crimes.”

But Duterte warned the country that this type of reform would happen when he came to power:

He’s repeatedly boasted that his presidency would see the end of crime, and on several occasions has hinted openly that he doesn’t oppose his police force or even citizens taking the lives of suspected criminals.

In a nationally televised speech in June, Duterte told citizens, “If (a criminal) fights, and he fights to the death, you can kill him.” He went on to say, “Please feel free to call us, the police, or do it yourself if you have the gun … you have my support.”

At least 700 have died during police operations:

“Double your efforts. Triple them, if need be. We will not stop until the last drug lord, the last financier, and the last pusher have surrendered or put behind bars — or below the ground, if they so wish,” Duterte said during his State of the Nation speech on July 25.

PC is not his middle name…

And he has something Obama lacks too. Balls. Big ones.

“Some balls are held for charity and some for fancy dress, but when they’re held by Obama-critics they’re the balls that I like best.”

Make the guy mayor of Chicago.

The Pro-Choice Church is losing face, everywhere. No longer can it lecture anyone on matters of beliefs, morality, and rights. Actually, it happened a long time ago, when people observed the juxtaposition of one-child and selective-child. It has come in to clear relief with social justice adventurism, progressive wars, and anti-native policies.

His treatment of drug dealers has been effective. And he has been treating the Muslim terrorists (Abu Sayyaf) just as harshly.

Abu Sayyaf set off a bomb in a street market in President Duterte’s hometown of Davao a couple of nights ago. “Duterte Harry” has stepped up his attacks on the terrorists.

His calling Obama a son of a whore and Obama’s canceling their meeting will only increase his reputation at home. “I am a president of a sovereign state and we have long ceased to be a colony.” I can hear the cheers from here!

My how the mighty have fallen. Gone from being called a son of god (okay, that’s a bit of an exaggeration) to a son of a —-! Well, as the good book says, pride goeth before a fall.

I would like to know about the context.
It looks as if Duterte was really upset about something that Obama did or said.
I want to know what it was.

Obama had announced his intention to “question” President Duterte on the 2400 drug dealers reportedly killed in the Philippines. Apparently El Presidente is aware that Obamaa’s questioning is largely indistinguishable from anyone else’s lecturing and as the leader of a sovereign country did not feel compelled to put up with being treated like a errant child.

[sarcasm]
Can’t imagine why he’d feel that way, can you?
[/sarcasm]

Calling Obama’s mother a whore isn’t a biggie. The problem Duterte made was suggesting Obama is male. Obama had to cancel the meeting to appease all the fantasists who pretend people have no gender.

He is really too kind. How do you say son of a whore in Korean.

I note that your translation appears shorter than the one from the O/L translator. Now, are you sure yours has the full force of the term. After all, we don’t want to give Obama any less than is his due. (grin)

Well, to a Korean, very carefully, and WAY out of reach…

It was a rhetorical question, but thanks anyway.

point of order: there is no evidence his mother every charged… it would appear that she just gave it away to all comers. (pun not intended, but still funny)

Obola, OTOH, is a whore, as is Shrillery, and it’s wildly entertaining to see real leaders from around the world snubbing him, mocking him, and, in general, announcing for all to see that 5hit Midas is an utter failure at just about anything, other than destroying our liberties and the American economy.

and yeah, it’s “whore” not bitch… although Obola is everyone’s bitch too. (except for the GOPe, of course.)

I’m in the Philippines and that is the first time I’ve heard that 2000 killed statistic. Which is odd.

As for the “putangina” it may be unclear whether duterte was using it as an expletive or directed it at Obama (there is usually a word following “putangina” to specify a target).

I’d seen other reports in the past couple of weeks, in PI news, about what some feel to be excessive violence against druggies — not just drug dealers and corrupt officials, but against simple users.

And I think you are correct, there is a “mo” missing. Shouldn’t it have been “Putang ina mo”?

The Philippines has abrogated the rule of law and so many here applaud. What happens when lawless comes for you?

When the law has been so compromised by money and power that it is no longer recognizable is it still the rule of law ?
Except, of course, for the little people.

It is happening here. The rule of law requires a virtuous people, a ruling class with integrity and a limited government. We are losing all three very rapidly.

Clearly the guy isn’t an idiot and realises that BarryO can only ever be part of the problem and not part of the solution (unless of course its BarryO’s solution…which is just a problem for everyone else).

I think Duterte basically saw this as an opportunity to play the tough guy and reinforce his image. The insult isn’t necessarily his assessment of Obama but more just trash talking. As to what he’s doing, well Singapore and Malaysia both execute drug dealers, and maybe the electorate believes that’s what it takes to keep a country safe and secure and prosperous in SEA.

Truth is the best defense against an accusation of slander.

He is the son of that name. The truth hurts.

Funny that our fearless leader hasn’t seen fit to question Iran’s president about killing homosexuals. Unless his plan was to reform them by sending millions of dollars and letting them build nuclear weapons.

He says what we all wish we would given the chance. Big cajones, indeed.

It would seem public figures other than Mr. Trump are willing to state the facts about the jug-eared fraud destroying our nation.

obama is ticked because he’d have pardoned all of the drug dealers and given voting rights to the terrorists.

This is the respect that Tyrant Obama the Liar has earned thru his lies and betrayal of our allies. Thru his failure to do anything to help Ukraine after promising to defend them against Russian aggression. Thru his failure to do anything against Syria after they crossed his chemical weapons red line. Thru his faux war against ISIS in Syria and Iraq. Thru his betrayal of our ally Quaddafi. Thru his abandonment of Iraq and lying about it being the Iraqi’s fault. Obama has earned disrespect.

So, what’s the problem?