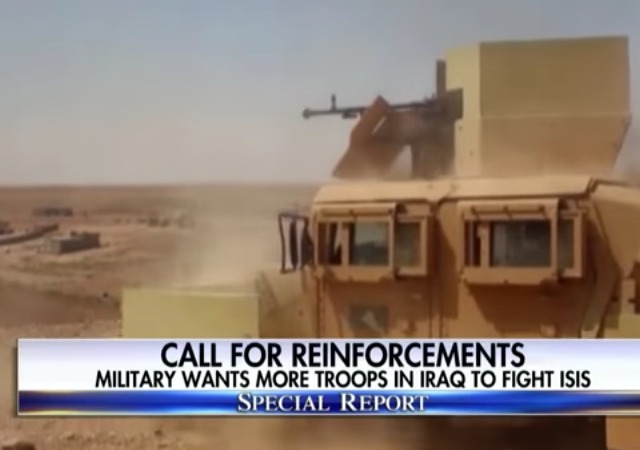 The military has requested approval to send 500 more troops to Iraq to assist in missions to retake Mosul from the Islamic State. The White House needs to approve the request, but officials promise the troops would not see combat. Instead they would help the Iraqi military coordinate and prepare a mission.

ISIS took over Mosul, Iraq’s second largest city, in the summer of 2014. Militaries have pushed ISIS out of many areas, but they continue to hold onto Mosul.

The new U.S. forces would increase the number of American personnel officially deployed to Iraq from 4,400 to about 4,900. The Pentagon also maintains up to 1,500 additional U.S. forces that it doesn’t acknowledge as part of its Iraq force, most at the U.S. Embassy in Baghdad or on temporary assignments. The new deployment would bring the overall U.S. presence to as high as 6,400. The 500 would be in addition to roughly 400 new personnel the U.S. sent to Iraq in early September to prepare for the Mosul offensive.

President Barack Obama hasn’t yet been presented with the military plan, according to U.S. officials.

The White House maintains that the troops the Pentagon sends to Iraq aren’t heading into direct combat. Rather, U.S. officials have said, those troops are there in an advise-and-assist mission. While they are armed and always have the authority to defend themselves on the battlefield, they aren’t performing direct action missions, officials have said repeatedly.

If the White House approves, these troops will stay at an area just south of Mosul that the U.S. has established as a hub called “Q-West” since it is located west of Qayara. Many U.S. forces already stay “there in the past several months in anticipation of the Mosul fight.”

The military does not know what the soldiers will find once everyone advances into Mosul:

U.S. military officials have said it is unclear what kind of fight they will find once inside Mosul. Gen. Joe Votel, who heads U.S. Central Command, said last month there may be areas Islamic State decides to cede to coalition forces immediately, and others in which it decides to fight to the death.

Reports emerged on Thursday that ISIS attacked U.S. troops with a mustard agent at the base. Thankfully, the agent did not injure any soldiers, but a few went under chemical decontamination. Mustard gas (a.k.a. sulfur mustard) is a powerful irritant and blistering agent that damages the skin, eyes, and respiratory tract. It can also damage the DNA, especially in the bone marrow. Exposure to it is usually not fatal, but respiratory problems, chronic blood problems, and scars from chemical burns can result.

In July, President Barack Obama promised to send 560 soldiers to help the Iraqi military recapture Mosul after they retook the base in Qayara. Secretary of Defense Ash Carter said:

Speaking to reporters at the weekend, Mr Carter said that the use of the air base would help create a “pincer movement” on Mosul, with Iraqi forces moving from the south and Kurdish peshmerga from the north and east.

“At every step in this campaign, we have generated and seized additional opportunities to hasten Isil’s lasting defeat,” Mr Carter said during his visit to Baghdad. “These additional US forces will bring unique capabilities to the campaign and provide critical enabler support to Iraqi forces at a key moment in the fight.”