ISIS May Have Attacked US Base in Iraq with Mustard Agent

ISIS May Have Attacked US Base in Iraq with Mustard Agent

Chemical agent had “low purity” and was “poorly weaponized.” 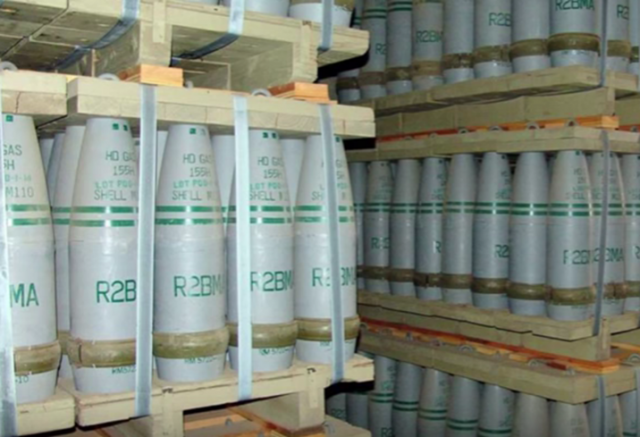 U.S. officials are now reporting that ISIS fighters have attacked U.S. and Iraqi forces with a “crude” chemical weapon that may have been a mustard agent.

The U.S base outside Qayyarah, 25 miles south of Mosul, was struck by a rocket and traces of a “mustard agent” were believed to be present, the official said. The attack was first reported by CNN.

A Pentagon official told reporters that a “tar-like black oily substance” was found on the shell, which landed within the base hundreds of yards from U.S. forces. An initial test for the agent was positive, but “could be false,” the official said. The second test was negative, possibly because the shell had been exposed to the elements.

No U.S. troops were injured, though some went through chemical decontamination. The nature of the weapon is still under investigation.

The shell was categorized by officials as either a rocket or artillery shell. After it landed on the base, just south of Mosul, US troops tested it and received an initial reading for a chemical agent they believe is mustard.

…One official said the agent had “low purity” and was “poorly weaponized.” A second official called it “ineffective.”

…Footage of air strikes on Monday showed 12 aircraft from the US-led coalition bombarding a large industrial site in Mosul.

Huge explosions could be seen hitting multiple buildings and storage units, leaving them in flames with large plumes of smoke rising into the air.

Mustard gas (a.k.a. sulfur mustard) is a powerful irritant and blistering agent that damages the skin, eyes, and respiratory tract. It can also damage the DNA, especially in the bone marrow. Exposure to it is usually not fatal, but respiratory problems, chronic blood problems, and scars from chemical burns can result.

My son was there in 2003, part of the march to Bagdad — where they donned their chem suits 4 times on the way. Then in the year he was there, his platoon disarmed many IEDs laced with Sarin. This is not news. what is the saying? journalism is deciding what people need to know? or Journalism is covering a good story…with a pillow til it stops moving.

Not to worry…. That “red line” has been crossed before!

Mustard gases (they are a family) and some blistering agents are pretty easy to gin up. They can produce more wounded than killed, which was kind of their design in WWI. Just like jacketed bullets, which some thought more “humane”, but for more strategic thinkers meant more wounded than killed outright (you have a LOT more people caring for the wounded as quickly as possible than the dead…who will wait very patiently).

Another thing that’s easy, plentiful, and cheap is chlorine and ammonia in their dense, commercial forms commonly found in “bottles”, like welding gases. I suspect that some of the “barrel bombs” used to attack both military and civilian targets use these.