It must be Friday – Four Palestinian terror attacks including car ramming

It must be Friday – Four Palestinian terror attacks including car ramming 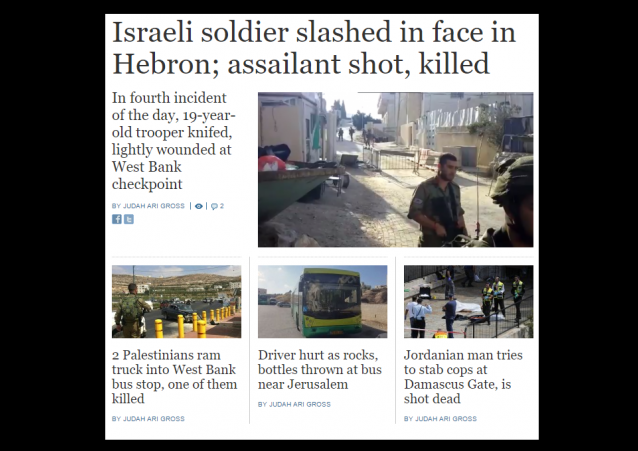 The so-called Knife or Stabbing Intifada has not been limited to knives or stabbings.

Car rammings have been a consistent method, as we documented before, The long list of Palestinian car rammings, including this one by a man who then got out of the car and attacked a victim with a meat clever before being shot:

Today was another car ramming to add to the list, via The Times of Israel, 2 Palestinians ram truck into West Bank bus stop, one of them killed:

Israeli soldiers shot and killed a Palestinian man and seriously injured a woman during a car-ramming attack at a bus stop outside the Kiryat Arba settlement in the West Bank on Friday, the army said.

The driver and passenger were shot as they plowed their car into the bus stop at the Elias Junction near the settlement, the IDF said.

“Two assailants rammed a vehicle into a civilian bus stop at the Elias junction near the community of Kiryat Arba,” an army statement said. “Forces at the scene fired at the vehicle resulting in the death of one of the assailants while the other was wounded.”

The man was pronounced dead on the scene. The Palestinian woman was shot in the stomach and seriously injured. She received preliminary treatment at the scene, before being taken to Jerusalem’s Shaare Zedek Medical Center, the hospital said.