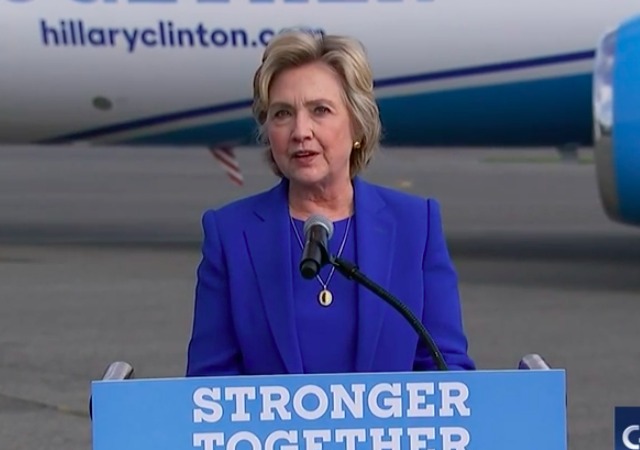 Today Hillary Clinton decided to hold her first formal press conference…the first in 287 days. She used it to attack GOP presidential candidate Donald Trump and his performance at the forum both attended Wednesday night. She also complained about the media coverage she was receiving.

Not that we need to remind you, but this is also the candidate embroiled in an email scandal wherein as Secretary of State major Clinton Foundation donors reached out to her for YUGE favors and including a few instances that just might be categorized as obstruction of justice. FBI notes showed she had difficulty remembering pertinent information from briefings, didn’t know how to classify documents, or that ‘C’ on emails meant ‘confidential’.

“I’ve been somewhat heartened by articles recently pointing out the disparate treatment of Trump and his campaign compared to ours — I don’t understand the reasons,” Clinton said. “I find it frustrating, but it’s part of the landscape we live in and we keep forging ahead.”

“I’m not asking for any special treatment,” she added. “I know the road that I’m on. I’ve been on it for 25 years and I just get up and keep moving forward.”

The Democratic nominee said it is difficult for the press to cover Trump because he says “outrageous things on a regular basis,” but encouraged reporters to hold him to a higher standard.

“I know it may be difficult to feel you know exactly how to respond to some of his behavior, but we’re on the brink of making a very critical decision for our country,” Clinton said.

I’ll repeat myself: THIS IS THE FIRST TIME IN 287 DAYS HILLARY HELD A FORMAL PRESS CONFERENCE.

Hillary only began traveling on the same plane with reporters after Labor Day.

I have heard many theories on why she’s stayed away from the press. The one I agree with is that she is letting Trump destroy himself, for which I honestly cannot blame her. But still. You’re a presidential candidate. You need to talk to the press. Part of the job is talking to the press so you can express your ideas and plans to the voters.

Oh wait. I forgot. Hillary thinks she’s above everyone else.

Anyway, at this press conference, she said Trump failed the Commander-in-Chief test. But look at what she said (emphasis added):

She denounced his call for seizing oil reserves in the Middle East as a way to deprive the Islamic State of a revenue source. She said that, “when asked how he would stop the spread of global terrorism, Trump’s answer was simply ‘take the oil.’ The United States of America does not invade other countries to plunder and pillage. We don’t send our brave men and women around the world to steal oil, and that’s not even getting into the absurdity of what it would involve—massive infrastructure, large numbers of troops, many years on the ground. Of course, Trump hasn’t thought through any of that.”

Um, as Senator of New York, didn’t she vote for the Iraq War? Oh, now she changes her mind, but does not know her history? Look at Korea. Vietnam. Afghanistan in the 1980s. It doesn’t take a very smart person to know that we would keep troops and remain active in Iraq after we toppled Saddam Hussein. It doesn’t take a smart person to know that going into the Iraq War would take MANY YEARS ON THE GROUND to resolve the problems in Iraq.

She reiterated at the conference that she would not put troops on the ground in Syria and Iraq to combat the Islamic State. However, she supports the air campaign and special services.

Hillary also slammed Trump for talking about the information he received during classified intelligence briefings, which presidential candidates receive. He said:

“What I did learn is that our leadership, Barack Obama, did not follow what our experts … said to do,” Trump said.

She claimed she would never do that, which shocks me, because as secretary of state she didn’t think discussions over possible drones strikes should be treated as classified or confidential. She also didn’t know the C meant confidential on emails. Oh well.

I admit, Hillary has a point about Trump’s praise of Russian President Vladimir Putin. No one can go by Putin’s high approval ratings. I mean, come on. They’re rigged. Nothing is pure in Russia. And yes, it is odd that he’d prefer Putin over President Barack Obama, but does anyone remember the reset button with Russia?

Yes. Hillary presented Russian Foreign Minister Sergei Lavrov with a reset button as secretary of state in 2009. Both Hillary and Obama wanted to reset the relationship with Russia even though the government invaded neighboring Georgia the previous August. Since the reset, the FBI has arrested numerous Russian spies, Russia has meddled in Ukraine’s affairs, then invaded Ukraine when parliament ousted their puppet president, annexed Crimea, and threatened previous Soviet Republics. Some reset, eh?

So while Trump’s remarks about Putin scare the crap out of me, I’m not exactly sure Clinton knows how to properly deal with Putin either.

Can this election end already?

Hillary would not hold this press conference if she did not look real bad yesterday and get caught with an earpiece.

“I’ve been somewhat heartened by articles recently pointing out the disparate treatment of Trump and his campaign compared to ours — I don’t understand the reasons,” Clinton said. “I find it frustrating, but it’s part of the landscape we live in and we keep forging ahead.”

“I’m not asking for any special treatment,” she added. “I know the road that I’m on. I’ve been on it for 25 years and I just get up and keep moving forward.”

Everyone else is tired.

Well now we know one thing. Like Obama personally took out Osama ( or was it the other way around ? ), she will personally take on Baghdadi, in her new high tech supersonic missile armed wheelchair.

Remember the ( very cheesy. terrible ) TV show Airwolf?
Her plans are to create a new one GroundCougar.

I just watched the “hillary has Parkinson’s” video and it is grim. It is narrated by a doctor and it shows the videos of her acting in very weird ways. One where she actually freezes up during a speech and her med-tech has to come on stage to get her back to reality by rubbing her back and whispering in her ear. There are many more examples of Parkinson’s symptoms and they are discussed. We need for her to undergo a medical exam and quickly.

I wonder how the Bernie-ites are reacting to her statement: “I have no sympathy for them, [ Republicans ]. He’s their nominee. “

HRC has not held a press conference with real questions because a) she can’t do campaign events without descending into a coughing fit and b) her poll numbers go down when she speaks in public. HRC reputation as a congenital liar is etched in stone at this point.

I read the transcript – at time.com of all places. The press conference was 75% foreign policy and 25% on media coverage of Trump. Trump is getting hammered hard in the media on his ISIS plan right now, no doubt thanks to some DNC / Journo-list coordination. But as usual he really only has himself to blame.

Trump’s initial stance was that he had a great plan but wouldn’t reveal it, which is like saying you have a talking frog in your pocket but can’t show it to anyone. His reasons ranged from not telegraphing it to ISIS to not having other candidates steal it. As usual he made promises like “its foolproof”, “it will be 100% successful”, “they will be defeated very quickly”, “its so simple”, etc.

Then he made statements about letting Russia and Syria fight ISIS rather than us, and later about sending 20,000 – 30,000 ground troops and either taking and destroying the oil. More recently he said that he would request a plan from his generals within the first 30 days of taking office, which makes it sound like he never had a plan at all. Lauer did ask him about that discrepancy and he said he has his own plan but will let the generals give him one too.

So if you’re a Republican running for a seat in the House or Senate, and a reporter asks you if you support Trump’s plan for dealing with ISIS – which Hillary specifically asked reporters do to – what do you say? Yes, let’s do the secret plan, it sounds great? Yes, let’s let Russia and Syria fight ISIS? Yes, let’s send more troops to the Mideast and seize or destroy their oil wells? Or No, Trump doesn’t know what he’s talking about?

The press probably could have gotten more questions in if they had written them on oranges and rolled them to her on the tarmac…provided they were not shot by sniper fire.

Come on hilldog, you really thought the c meant cash.

She has a very selective memory loss. She can remember exactly what Colin Powell said about how she should handle email at a casual party but can not remember her training on how to handle classified materials.

I’ll repeat myself: THIS IS THE FIRST TIME IN 287 DAYS HILLARY HELD A FORMAL PRESS CONFERENCE.

It seems increasingly likely that Hillary is sufering some sort of medical ailment. Some physicians have opined that her observed symptoms are consistent with Parkinson’s Disease, and in fact in one of her (recovered) emails she specifically asked staff to investigate modern treatments for Parkinson’s.

If in fact she does have Parkinson’s, holding a press conference could potentially be a complete disaster unless the questioners (and questions) are very carefully controlled. Her rather bizarre hehavior at the Democratic Convention appears to have been dyskinesia, a side-effect of the most common drug used to treat Parkinson’s.

We’ll see how this works out…