Out: checks and balances; In: meh, it doesn’t matter 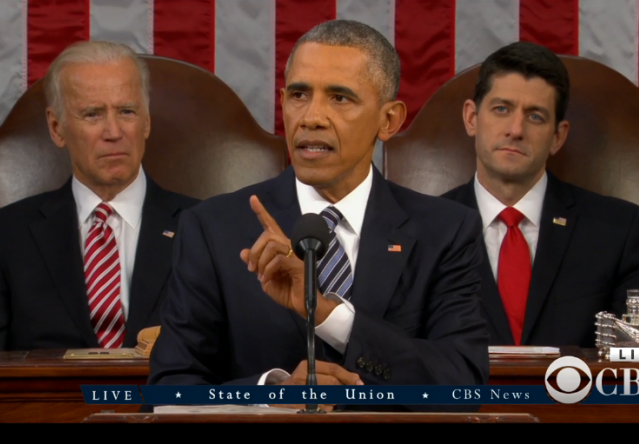 According to a recent Gallup poll, D. C. gridlock and “do nothing Congress” accusations seem to have taken its toll on Americans’ preference for divided government.  Just 20% of Americans now prefer the presidency and Congress to be controlled by different parties…the lowest it’s been in 15 years.

One in five Americans believe it is best for the president to be from one political party and for Congress to be controlled by another, the lowest level of public support for divided government in Gallup’s 15-year trend. The remainder are evenly divided between those who favor one party controlling both the presidency and Congress (36%) and those saying it makes no difference how political power is allocated (36%).

Americans’ current preference for one party controlling both the presidency and Congress is near the record high of 38% from four years ago. That fits with a pattern of heightened support for single-party control seen in the past two presidential election years. In 2004, the preferences were more evenly divided. These results are based on Gallup’s annual Governance poll, conducted Sept. 7-11. 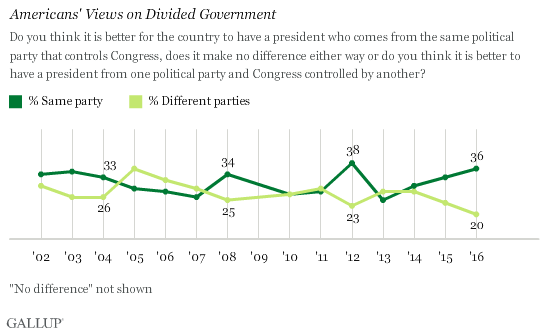 Gallup includes results regarding the partisan preference on divided government, finding Independents most likely to say it doesn’t make any difference.

The percentage of Democrats who want the same party to control government is now 40%, down from 49% in 2012. However, Democrats’ preference for divided government is essentially unchanged; it is now 14%, versus 13% in 2012. In the four most recent presidential election years, the percentage of Democrats who have said the division of power in Washington “makes no difference” has stayed relatively consistent, between 32% and 39%.

Independents tend to be indifferent on retaining divided government, at 38% “makes no difference.” Unlike views of Democrats or Republicans, independents’ views on this issue have not fluctuated much in the four most recent presidential election years. Independents notably are much less likely than both major parties in 2016 to say they want the same party to control the political branches of government.

In recent past election years, those who supported the party of the president in office tended to want the same party to control both political branches of the U.S. government. For example, in 2004, more Republicans than Democrats wanted same-party rule, and the opposite occurred when a Democrat was in the White House in 2012.

This year, relatively few Democrats or Republicans wish for divided government. In addition to each group possibly feeling optimistic about their party’s chances in the election, another reason so few support divided government could be a desire to overcome political gridlock and pass legislation. In any case, Americans have no clear preference for whether the same party should control both political branches or whether it makes no difference.

One might add, that executive “pens and phones” may play a role here.  The accumulation of power in the Executive branch in recent decades may also contribute to American apathy to divided government: what once was seen as a strong means of checks and balances may now seem moot to many.

The Republican Party’s candidate evidently disdains his credulous supporters who continue to swallow his mendacities. About 90 percent of presidential votes will be cast for Hillary Clinton or Donald Trump, refuting the theory that this is a center-right country. At the risk of taking Trump’s words more seriously than he does, on some matters he is to Clinton’s left regarding big government powered by an unbridled presidency.

His trade policy is liberalism’s “industrial policy” repackaged for faux conservatives comfortable with presidents dictating what Americans can import and purchase at what prices, and where U.S. corporations can operate. Trump “wouldn’t approve” Ford manufacturing cars in Mexico. He would create a federal police force to deport 450,000 illegal immigrants a month, including 6.4 percent of America’s workforce in two years. Yet the 25 million jobs he promises to create would require more than doubling the current rate of legal immigration to fill them, according to economist Mark Zandi. Of the Supreme Court’s 2005 Kelo decision diluting property rights by vastly expanding government’s powers of eminent domain, Trump says, “I happen to agree with it 100 percent.” Even Bernie Sanders rejects Kelo.
https://www.washingtonpost.com/opinions/trumps-rise-reflects-american-conservatisms-decay/2016/09/28/e9244732-84cf-11e6-a3ef-f35afb41797f_story.html?utm_term=.0226539baf3d

T-rumpism is Collectivism. Pure and simple.

“About 90 percent of presidential votes will be cast for Hillary Clinton or Donald Trump, refuting the theory that this is a center-right country.”

You’re correct, but it’s because the Overton Window has shifted to such a degree that the people are now convinced that conservatives (who, in fact, have never moved from their positions) have “moved” to the extreme right, when it is everyone else’s movement to the left that has created the illusion. So the “right-center,” in most people’s perception is right of the center of where the Window is now, but in yesteryear that same spot was considered centrist.

Since I don’t call myself a Republican anymore thanks to turds like McConnell, McCain and Boehner and I’d rather drop dead than be a Democrat; I guess I’d have to agree with the Independents. We’ve picked up $9T in new debt since Obama has been President and for the majority of that time Congress was controlled by the GOP.

Democrats? Republicans? “What difference, at this point, does it make?”

Truly. Both parties are on boats to a progressive utopia, one fast, one slow. Doesn’t matter which one they’re on, they’ll get there sooner or later.

Both parties are destroying the republic. Neither represents people. The political class has divided the public in half and is making sure that we hate each other while they spend us into more debt, take away freedoms, violate the Constitution and stomp all over productivity and prosperity. But, hey, as long as they can keep their jobs and line their pockets, they just don’t care about anything else.

Been saying it for years. Two sides of the same filthy coin. They only disagree on what to spend our money on. And they agree on 95% of that.

Polls such as this don’t (can’t?) contextualize, and respondents likely have only the current situation – Obama/Dem president, GOP congress – in mind when they reply.

This isn’t the victory of communism, its the victory of the apathy induced by a constant barrage of distractions provided by the electronic media in all forms. The chickens are hypnotized.

I think you are part right about this, but I also think that the right has been increasingly influenced by the socio-cultural deluge that posits that big government is the answer to everything. Years ago I wrote a post here at LI (long before I became a regular author) about how I would like to see the Congress do exactly nothing, or at least to repeal two laws for every one they passed. Everyone seemed horrified. The answers, they appeared to think, lie in more laws, more federal meddling, more government. Why would we pay legislators not to keep piling up the laws on every conceivable aspect of our lives and those of others? I was outnumbered then (I’m okay with that, I’m pretty far right in terms of limited government and am serene in that knowledge), and it’s gotten worse since as the right embraces a federally-mandated minimum wage and the new Trump entitlement of taxpayer-funded child care.

The “right” simply isn’t that right any longer (I’m not even sure I’d call it centrist at this point), and the foundational argument of the socialist/commies are pretty much assimilated into our society. Got a problem? Call the feds, demand a law, get it fixed up there in D.C. where they know best. Ugh. It’s tragic.

I’d agree that there has been a drift left probably starting in the 70’s when the boomers hit what can loosely be called “adulthood”. Maybe I’m projecting my own experience but I’d say the its been practical as well as socio-cultural in the truest sense. Just managing one’s life requires dealing with a span of entities which makes a lurch toward any form of simplification almost inevitable. Utilities, licenses, phones, computers, medical providers, insurance, etc collectively make me crave simplification to the point where I’d almost, almost want to negotiate a deal with the devil to make things more plug and play. As far as socio-cultural, most people probably work for large companies so the joiner impulse is encouraged. None of this was true in my parent’s time. So right, right is maybe center but a rightward shift is in progress. The left has gotten cavalier, as witnessed by Comey playing the coquette in emailgate. They don’t even bother trying to provide anything substantive.

Your idea of revoking laws as they are new ones are passed is appealing. I’d ask my congress people about it if I could find out where they hang out.

And yes it is tragic. I wonder if it will get to this:
https://www.youtube.com/watch?v=xvxpETbsn08

>>>>I’d ask my congress people about it if I could find out where they hang out.<<<<

Two problems with that. We had the staffer from 10 year incumbent Republican Congress-Critter Doug Lamborn tell us that he would not come to any public gathering unless it was a fundraiser for him. Not feeling like we had to pay what is supposed to be our employee to come report to us on his activities [supposedly] on our behalf, our response to that included the phrase "In A Fire". The second problem is that incumbent Congress-Critters lie reflexively, figuring [with some justified history] that they will always get away with it.

People don’t seem to understand that inaction is a course of action, and sometimes the appropriate course. I, too, have thought for years that every third legislative session should be devoted to passing a budget and repealing laws – no new laws allowed. I’ve also long viewed the fact that the legislation of new laws every year is a sort of admission that the legislators didn’t do their jobs in the last session. If they had, there would be no reason for any new laws. At some point “no more laws” should be appropriate. When might we get to that point? Probably never, because nobody believes in the concept.

Divided government … sounds like a good idea. Somebody should try it someday.

Okay, this made me laugh. Not just a giggle-snort, an actual laugh. 🙂

Any respondent who could not define “Representative Republic” should have been disqualified from not only this poll, but from voting in any election outside of DWTS or AMGT.

The Republican “leadership” worked so hard to make sure that they cannot be differentiated from the Democrats by results, that they are counted in the one party.

Well it looks like the divide government has been streamlined to with Comey stating that Combetta’s actions to cover up “very VIP” email addresses did not constitute an attempt to destroy evidence. So easy a democrat could do it. No more legislative and no more judiciary.
http://www.politico.com/blogs/under-the-radar/2016/09/clinton-email-reddit-james-comey-228832

This would have sounded better in English.

We are now mostly a nation of dumbasses. Remember, Obama was elected twice. And how many times were the GOPe hacks running the party re-elected.

The ‘genius’ of the American people that served the republic so consistently, is no more.

The leftists have the day, because the rightist went to sleep.

Over the past 8 years (at least), Congress has done their damnedest to make sure people see precisely how irrelevant they are. As in the days of the Caesars, theirs is merely a ceremonial function: all they have to do is rubber stamp the whimsical decrees of Caesar and provide the slightest veneer of legality, nothing more ~