Elizabeth Warren: Trump Suggesting ‘Somebody Should Do Violence’ to Hillary

Elizabeth Warren: Trump Suggesting ‘Somebody Should Do Violence’ to Hillary

Warren: ‘What Kind of Human Being Are We Talking About?’ Good Question, Elizabeth 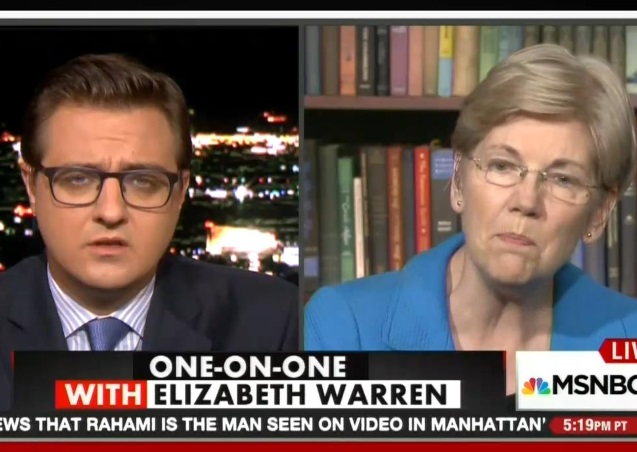 For those contemplating the appalling possiblity of a President Hillary Clinton, just consider: Elizabeth Warren, had she thrown her hat in the ring, might today be the Dem nominee.

On Chris Hayes’ MSNBC show tonight, the always-at-11-on-the-rage-meter Warren alleged that Donald Trump, by imagining what would happen if Hillary’s bodyguards laid down their arms, was urging violence against Hillary. Specifically, Warren said: “for me that’s not even wink, wink, nod, nod. This is Donald Trump saying, hey, there’s another way to deal here. Again, this kind of goes back to this question about what kind of a human being are we talking about? So he’s losing to Hillary Clinton and his answer is to say somebody should get out there and do violence.”

If you didn’t know Fauxcahontas was being deliberately obtuse to promote the narrative, you’d think she really was obtuse.

Okay, maybe she really is that obtuse.

Maybe she is just a victim of CTE.

Heard she told the CEO of Wells Fargo to resign during the hearing today.
I’ll bet if he offered her some beads and wampum she’d take it.

Even if he were urging violence — which he wasn’t — unless it was calculated to produce imminent violence, and actually did so, it would be protected speech.