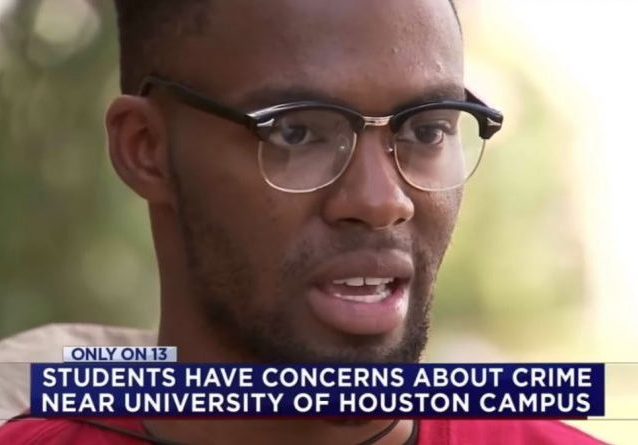 I certainly don’t want anyone robbed at gunpoint.

There is great irony, however, when such a leader then also calls for more police protection, as happened recently in Houston with Jerry Ford, Jr.:

I actually want people like that robbed at gunpoint.

and by fellow blacks.

… but if that’s what it takes for them to realize that police serve a vital and valuable societal function and cease their calls for death, destruction, and disorder, then I can’t honestly say a little armed robbery is a net bad thing, either.

I’m not even sure I believe this guy. No witnesses, no footage, all this in an area he claims is high-traffic. He’s a BLM scum. Why should he be believed? How do we know this is just a way to ultimately provoke and hassle the police?

That is actually worth a few laughs!

What’s that old saying? “A conservative is a liberal who’s been mugged.”

“And a Libertarian is a Conservative that has been mugged by the government.”

“Jerry Ford Jr.
I would love for anyone to show me where I have stated that I was against all cops. I have always been against bad cops and bad policing, not the good cops who serve and protect my community like the two african american officers who showed up to my aid. This article is a reach. I am embarrassed for you.”

If the robber was white that would have been the lead…..

I believe you are right. If the robber had been white it would be the lead so they could “prove” whites are not only thieves but racists.

If the robber had been white it would have been news. This isn’t even dog bites man; it’s dog bites dog.

saw that, my reply:

this is really one of the root causes of all this sh*t. either american or not.make a choice.

I have always been against bad cops and bad policing

LOL, I’m sure his definition of bad policing doesn’t come close to the real thing either.

No sure why I have 4 thumb downs. Dmacleo gets my point.
Funny Mr. BLM think Campus police should be protecting him when he lives off campus.

Darn, wish I had some entitled black privileges so I did not have to work my way through college starting and stopping over a 10 year period. I was working so much, I had no time to even think about something like BLM.

That reminds me, I need to re-watch “The Jerk”

There is no “level of protection”. Cops can’t be everywhere. It can happen to anyone at any time. My house was burglarized in broad daylight the day after we left for vacation a few weeks ago. Half-way smart crooks know how to avoid cops.

The point is that the BLM crowd has a serious problem in choosing their martyrs…they tend to get violent in support of thugs and demand that cops be prosecuted for just doing their jobs.

And then they complain when the cops aren’t johnny on the spot.

Reminds me of an Alanis Morisette song.

I think in many cases, high crime areas do not get the level of protect because they lack that working relationship with police.

Level of expectation is relative, like you said. It is unrealistic to think that cops can be everywhere. I know counties were there may be only two or 3 patrols in a 30 sq. mile area. It is reasonable to expect that response times are going to be 10+ minutes and only if you are the one having problems.

Ford actually makes the argument for 2nd Amend. supporters. Minutes matter when seconds counts. Maybe he will learn two lessons here, but I doubt it.

Maybe if he had a better relationship with the police and others reported crimes in the area, he would have gotten a higher level of protection.

I think you have a point. It is difficult to gauge exactly what effect the “Stop Snitchin” and “Snitches get Stitches” movements in the black community have, but I can’t imagine that it helps police solve crimes.

What we have here is a conflict between two agendas: personal safety and group politics (social justice).

Justice is an individual issue. SJ is a political tool/philosophy for dehumanized groups where members are interchangeable and no more than tools or statistics. Marx was a mental case.

Come help me, but….
Enforce the laws, but….
Make arrests, but……
Save and protect my Butt, but……

Wants it all, ‘but’ guess what?
You can’t have it both ways.

Schadenfreude…the word (and the feeling) is so satisfying and it just rolls off of the tongue.

BLM should claim to do abortions on the side.
That will get them federal protection pronto.

Suck it up Snowflake!
You can’t have it both ways!

We HAVE to have it both ways…if the ways are good policing by good LEOs.

Nothing whatsoever wrong with that, and black Americans are wholly in favor of both, as are…I would suppose…all Americans.

One of the worst things that can happen is for conservatives to get pushed into the corner of supporting the very rare bad cop out of a knee-jerk counter-reaction to the BLM bullshit. THEN we really do have a problem.

“and black Americans are wholly in favor of both, as are…I would suppose…all Americans”

I will venture here, not suppose here, that yes all Americans favor good policing. What the media carries as typical coverage of injustice on law enforcement is this video and the coverage here points out the hypocrisy of his message as a SJW leader who demonize those who serve to enforce laws yet want an “exception policy” using racial lines as a defining ruler when to or not to enforce.

Re-define the message and those who deliver it, because it does not play with the majority of law abiding, tax paying Americans. You really cannot have it both ways.

On the other hand, I do not remember the lyrics being…

“CORRUPT pigs in a blanket, fry’em up like bacon”.

It seems to me a generalized demand for dead cops, followed later by a demand for more police presence is trying to have it both ways.

That is so rich my cholesterol shot up and I had to take an extra Lipitor.

Wasn’t Lipitor one of the villains in “He Man” cartoons my boys loved when they were little…???

And THAT is why campus carry was passed. Now I don’t know if the BLM hack is eligible for a license to carry, but if he had a concealed handgun AND had some self awareness, he might not have been a victim. And he also depended on the “mercy” of his attacker to keep on breathing.

Take your complaint to Kaepernick.

The irony is soooo delicious, I can hardly stand it…….

Raise your hand if you absolutely believe this “victim” really got mugged.

You cannot make this sh*t up.