Annoying Dem Meme ‘o the Day: Hillary & Obama As Defenders of ‘Our Values’

Annoying Dem Meme ‘o the Day: Hillary & Obama As Defenders of ‘Our Values’ 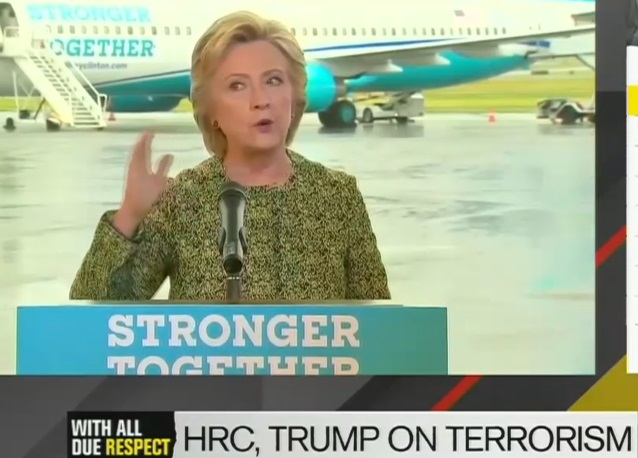 Legal Insurrection readers who are also Rush Limbaugh fans know that one of El Rushbo’s pet peeves is the way liberals have tried to co-opt the term “our values” into their political lexicon.

There was a perfect—if annoying—illustration of the phenomenon on today’s With All Due Respect. In clips of Hillary and President Obama, and during a live interview of Obama spokesman Josh Earnest, discussing the latest terrorist bombings in NYC and New Jersey, the v-word was bandied about no fewer than six times. View the video for the nails-on-blackboard montage!

What do LI readers think of this recurring attempt by liberals to seek to present themselves as the defenders of our American values?

HILLARY CLINTON: But we’re not going to go after an entire religion. We choose resolve, not fear. We will not turn on each other or undermine our values.

PRESIDENT OBAMA: They are trying to hurt innocent people, but they also want to inspire fear in all of us, and disrupt the way we live: to undermine our values.

JOSH EARNEST: There’s no denying that the rhetoric that we’ve heard from a lot of Republicans, including the nominee, is contrary to our values . . . We’re going to destroy this terrorist organization, but we also need to make sure that we are doing this consistent with our values . . . They are also our teachers, and lawyers, and doctors and nurses. These are people who are making an important contribution to our great country. And to deny that fact or to obscure that fact to win political points is shameless. It’s inconsistent with our values. . . The President is determined to make sure we don’t lose sight of that, not only because it’s an important part of our national security strategy, it’s also consistent with our values as Americans.

Anyone else think Hillary’s eyes aren’t working together?

Indeed. I asked the same thing of people in the room. And th day before yesterday she was in a daze. Here, she looked everywhere but at the camera. She was reading or something, and she was wearing dark blue contact lens I think.

“Our values” amount to nothing if we are led by the felonious village idiot.

For 8 long years they have been covering us with Crap. Now they are afraid someone will come along and wash it off.

Whereas the real story is that a Reaganite would look for a pony.

If my values were based on things like moral relativity, disingenuousness and elitism, then I would agree.

You left out corruption, cronyism and treason.

How in the world can they be defenders of our values when they speak so ill of and look down on us, the deplorables.

They’re not defenders of MY values.

Forgery is not one of my values.

Way back over a year ago, when it first came out that Hillary never had a State Department email address, and conducted all of her business as Secretary of State through her private server, the very first thing that I said was that this proves conclusively that Darrell Issa and the House Committee on Benghazi weren’t investigating anything. The Benghazi hearings were faked.

My reasoning was pretty straightforward. It had been well over two years since the supposed investigation started, so it made no sense to come out now that Hillary never had a Secretary of State email address. By all logic, the very first documents subpoenaed pursuant to the Benghazi investigations should have obviously revealed “[email protected],com.”

On July 23, 2014, the House Select Committee on Benghazi had reached an agreement with the State Department on the production of records, according to an FBI report
The Reddit post evidence that [unnamed reddit user] wanted to remove a “VERY VIP” email address from archived emails? On July 24, 2014.

There is no doubt that the document dump that Hillary gave to the House Committee was forged. [unnamed reddit user] stripped the “[email protected],com” address from the emails and replaced it with a spoofed State Department address. Two years later, somehow, the House Committee realized they’d been duped, and that’s when the story broke that Hillary used a private server during her four years as Secretary of State.

That’s why Hillary turned over paper copies of her e-mails. Her Platte River IT hacks couldn’t figure out how to change the “sent from” line electronically, so her staff had to print out the e-mails, do a cut and paste job, and then copy them so that the alteration would not be obvious.

Every single one of Hillary’s values that she has displayed (not just talked about) over the last twenty-plus years runs almost perfectly against mine. I look forward to voting against her.

Very similar to the lines Obama used to use about “that’s not who we are” when he was being even sillier than usual.

As in, “We don’t defend ourselves against attack by our mortal enemies … that’s not who we are!”

I look forward to having a President who isn’t embarrassed to be American.

Crooked Hillary please tell us about your values!

I am surprised that Hillary is still out campaigning. When I heard about the big airbag recall I was sure she was a goner.

It is all perfectly straight-forward when you consider that the liberal version of “our values” are wholly situational, without any absolutism, and do not have any intersectionality with white, conservative, Christian, male, gun owners.

Every time that wicked woman speaks I want to retch or throw rotten eggs in that direction. Ugh.