USAF General: Our adversaries may build a ‘Terminator’

USAF General: Our adversaries may build a ‘Terminator’

The capability could be developed in 10 years 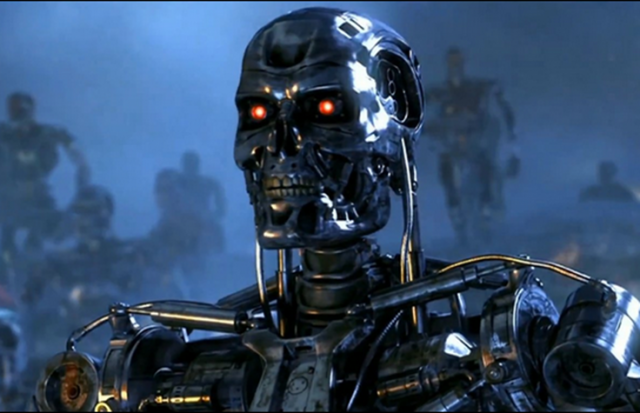 The Terminator is an iconic film that helped propel former California Governor Arnold Schwarzenegger to stardom.

The movie is also a basis for discussion about the future of military weaponry, as Air Force General Paul Selva, vice chair of the Joint Chiefs of Staff, uses the film as reference in describing autonomous weaponry systems that could be developed in the next decade.

The nation’s second-highest ranking military officer believes that our adversaries may try to build completely autonomous “Terminator”-like systems that can conduct lethal operations on the battlefield.

“I don’t think it’s impossible that somebody will try to build a completely autonomous system, and I’m not talking about something like a cruise missile … or a mine that requires a human to target it and release it and it goes and finds its target,” Selva told an audience at the Center for Strategic and International Studies in Washington, D.C. when asked about such capabilities. “I’m talking about a wholly robotic system that decides whether or not, at the point of decision, it’s going to do lethal ops.”

Selva has previously dubbed debate about the implications of autonomous weapons the “‘Terminator’ conundrum,” referring to the science fiction films featuring Arnold Schwarzenegger.

Selva said technologists have told Pentagon leaders that the capability could be developed in 10 years.

Perhaps the most concerning aspect of his statements is Selva’s solution to this conundrum:

He also threw his support behind the idea of a treaty or global convention against the creation of wholly autonomous systems that can operate without a man in the loop controlling it, saying: “I do think we need to examine the bodies of law and convention that might constrain anyone in the world from building that kind of a system. … I think we have to have something.”

I am no military expert. However, given the recent track record of international treaty successes and the fact pizza can now be delivered by drones, I  suggest that preparing for the inevitable “Rise of the Terminators” would be prudent!

“It should not be a surprise when adversaries employ autonomy against U.S. forces. Preparing now for this inevitable adversary use of autonomy is imperative,” the report says.

The report also says that the U.S. should expect and plan for other countries to not have the same high moral standard as America, allowing autonomous platforms to make lethal decisions.

“Despite understanding that autonomy used against U.S. forces provides both a threat and an opportunity, DoD capabilities and knowledge in this area are fragmented, often compartmented, and provide little opportunity to benefit from both offensive and defensive technologies, techniques and programs,” the report says.

Our military and the industries that support it have done a tremendous job with their assigned missions. Here’s to hoping they can develop the measures needed to respond to “Terminators.”

I think we should begin with limits on the autonomous robots we have in Congress.

“I’m talking about a wholly robotic system that decides whether or not, at the point of decision, it’s going to do lethal ops.”

ISIS already has that.

The most common terminators were tanks and aerial units. The humanoid cyborg terminator was an infiltration unit designed to get into bunkers by appearing human.

Also the Terminator idea was probably sourced (stolen?) from a 1953 Philip K. Dick short story called “Second Variety” that was the basis of a 1995 movie “Screamers”. The short story is really good, the movie is okay, nothing special.

How is that F-35 working out for you General?

Technological old hat. Systems which can detect and track multiple targets, choose which are the most threatening, and engage them with either rockets or kinetic weapons (i.e., guns)—all automatically—have been in service for years with both the Navy and the Air Force.

No, these things don’t look like Hollywood-esque killer robots, but they are, nevertheless.

Iran will want to talk to obama about the treaty and side agreements.
It’ll need programming and probably wifi. Some 8 year old will hack it in 10 minutes.
Worry more about granny panties in the White House. No one would need a terminator,they’d just buy the U.S. for 5 cents on the dollar……on ez pay.

Difficult to improve on disposable drones, which can be deployed in swarms.

I thought “our adversaries” already had built a robot Terminator to use against this country. They named it Hillary.

ROFL! This is my official “comment of the weekend”!

They want to build a Terminator? Go ahead, we’ll build time travel and stop it. No biggie. In all seriousness, I find it ironic that we as a nation use remotely piloted aircraft (which are still piloted by humans) to shoot million dollar missiles are non-strategic human targets. And our generals are the ones who want to create a treaty to put a hold on using autonomous weapons. The optics of that are muddled at best.