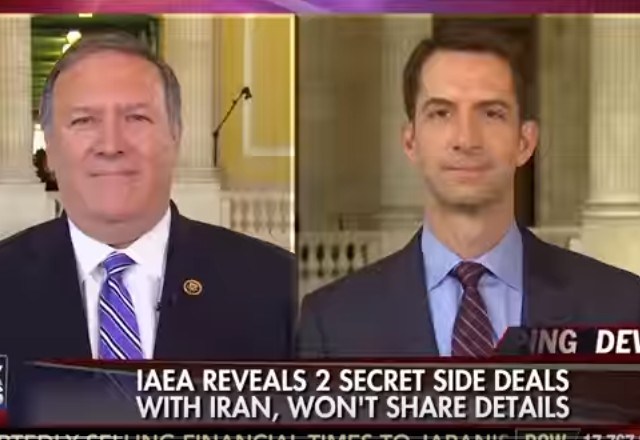 Rep. Mike Pompeo (R – Kan.) and Sen. Tom Cotton (R – Ark.) have a lot in common. Both are army veterans and both are graduates of Harvard Law School. And both have been doing a great job of exposing aspects of the nuclear deal with Iran that the administration would rather keep quiet.

This week it was reported that an inquiry from Pompeo got the State Department to admit that the nuclear deal was never signed and is not “legally binding.”

Julia Frifield, the Assistant Secretary of State for Legislative Affairs, wrote in response to Pompeo’s inquiry if he could see the signed agreement, in a letter reproduced at the congressman’s website, that the nuclear deal was not binding and that it was not signed by any party. The key parts of the letter read:

The Joint Comprehensive Plan of Action (JCPOA) is not a treaty or an executive agreement, and is not a signed document …

The success of the JCPOA will depend not on whether it is legally binding or signed, but rather on the extensive verification measures we have put in place, as well as Iran’s understanding that we have the capacity to re-impose — and ramp up — our sanctions if Iran does not meet its commitments.

Frifield asserted that the JCPOA was not a signed agreement but “reflections of political commitments” between Iran and the P5+1 nations – the United States, Britain, France, China, Russia and Germany.

Pompeo responded, “For the State Department to try to defend the unsigned and non-binding Iran nuclear agreement by calling it a ‘political commitment’ is about as absurd as the terms of the deal itself. … Instead of forging an agreement with Iran that will protect Americans and prevent the world’s largest state sponsor of terror from obtaining a nuclear weapon, the Obama administration caved to Iranian bullies and serial nuclear cheaters. Unsigned, this agreement is nothing more than a press release and just about as enforceable.”

Pompeo, of course, knew that the deal was unsigned, but he got the State Department to admit it.

Cotton did the same thing back in March before the deal was announced. In response to the open letter to Iranian Supreme Leader Ayatollah Ali Khamenei written by 47 Republican senators led by Cotton, Secretary of State John Kerry said that the letter “erroneously asserts that this is a legally binding plan. It’s not, that’s number one. Number two, it’s incorrect when it says that Congress could actually modify the terms of an agreement at any time. That’s flat wrong. They don’t have the right to modify an agreement reached executive to executive between leaders.”

Here Kerry asserted, four months before the non-binding, non-agreement was announced, that the deal would not be legally binding and he explained why, to avoid Congressional scrutiny. (To be sure he didn’t put it as crudely as I did, but that’s what he meant.)

A second side-effect of the Cotton letter was the response from Iran’s foreign minister and lead nuclear negotiator Mohammad Javad Zarif, saying that the deal was being constructed so that it would indeed be binding – on the United States. (By the way, I can’t imagine the administration was too happy with Zarif for his blunt honesty here.) By having the United Nations Security Council ratify the non-binding nuclear non-agreement Zarif wrote it would mean “that if the next administration revokes any agreement with the stroke of a pen, as they boast, it will have simply committed a blatant violation of international law.”

An executive agreement though it doesn’t require Senate approval may be reversed by a future president. What Cotton’s letter did was expose the administration’s ploy to evade Congressional oversight and still achieve the permanence  of a treaty by going to the U.N. Security Council.

The State Department’s response to the letter from Pompeo merely confirms something that was already known. But it’s also important that the State Department is acknowledging that deal is not binding and claims that what will prevent Iran from developing nuclear weapons are the carrot of sanctions relief and the stick of reimposing sanctions. Since there is language in deal allowing Iran to back out if sanctions are reimposed for any reason, there is no effective stick to prevent Iran from cheating.

The non-binding nature of the nuclear non-agreement isn’t the only subterfuge that Cotton and Pompeo have exposed. It was also their questioning that led to the discovery of the secret side deals between Iran and the IAEA. One of the side deals allowed Iran to collect its own samples at the Parchin military base, an arrangement that non-proliferation experts Olli Heinonen, a former deputy director of the IAEA, and David Albright, head of the Institute for Science and International Security, said undermined the effectiveness of the JCPOA. (The scandal of self-inspection of Parchin had previously been brought up by Sen. Robert Menendez (D – N.J.) and Sen. James Risch (R – Idaho).)

When they ran to the security council to ratify the deal — before Congress could even debate it — I knew we’d been had. This administration isn’t incompetent, it’s disloyal.

I’m sure the Iranians will return the $150B dollars in rials we’ve helped release though, right?

treason has many faces

This news was not a surprise to David, of course.

It was pretty clear it wasn’t signed when President Photo-Op Selfie didn’t have a ceremony. How can Iran “violate” a deal they refused to sign?

AND make no mistake, there was no signing because Iran refused. So Obama hasn’t mentioned their enriched uranium stocks have INCREASED since the “agreement.”