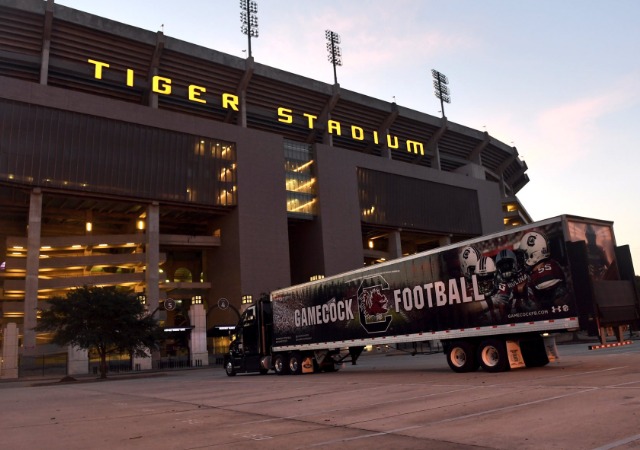 Last fall, Louisiana State University (LSU) reached out to University of South Carolina (USC) when their state had epic floods, offering them space and transferring their home stadium into USC’s home stadium. Now USC has decided to return the favor as Louisiana faces historical flooding that has killed 13 people:

“LSU was so gracious to assist us in our time of need,” South Carolina president Harris Pastides said in a statement. “Now it is our turn to help our SEC friends. I encourage all Gamecocks to drop off items needed for the Baton Rouge flood relief.”

The university encouraged locals to bring food and sanitary items along with basic clothing items and towels and blankets.

So many people responded that the university has to send TWO full trucks to Baton Rouge.

The second truck from @GamecockFB is now being unloaded. We'll let this photo speak for itself. ? #wow pic.twitter.com/6apFhUHC6F

The unloading has started. @GamecocksOnline weren't kidding whey they said they had a full truck! ? ? pic.twitter.com/8d7xvX7FFO

Officials decided to use the LSU campus as a “staging area for relief efforts” in Baton Rouge.

The LSU football team and other athletic teams have done all they can to help the flood victims:

And then him 20 yrs ago pic.twitter.com/dA9rNz7smW

Shout out to @LSUSwimDive. Helped my brother in law's sister with flood repairs. Thanks so much. #LSU pic.twitter.com/izTkfOF3hf

The University of Louisiana-Lafayette football team also lent a hand to flood victims.

Flooded out car was in middle of driveway; @RaginCajunsFB helped move it to one side. #LouisianaFlood https://t.co/Q31slI8RvH

Cool story. Someone need to write up the “Cajun Navy” story, too.

Private individuals doing what BIG GOVERNMENT could not do.

“BIG GOVERNMENT” has to conduct diversity and sex discrimination classes before they can send anyone down.
That should be complete in a few months…

Might send the US Navy to help, as long as the Cajun Navy agrees. Hate to see the USN outgunned.
South Carolina has a history of that. After the Civil War, the NYC firefighters, likely many of them veterans, found Charleston didn’t have a fire engine. They raised funds to buy one and sent it off. The ship carrying it sank. They raised more funds and sent another one.
The citizens of Charleston vowed to return the favor, “should misfortune ever befall the Empire City”.
So they raised funds to replace one of the engines lost in the 9-11 attacks. “We keep our promises,” said one school kid.