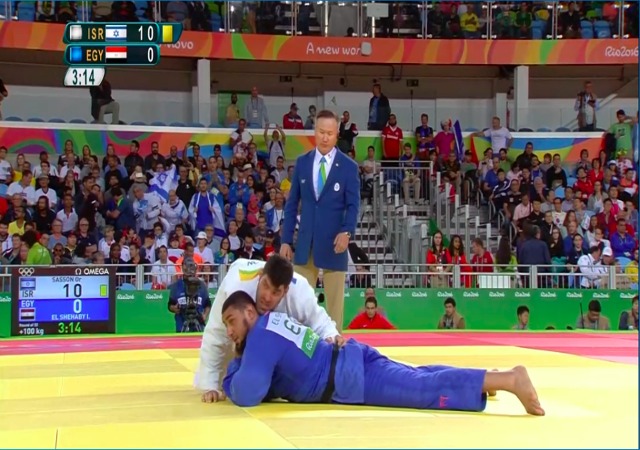 Anti-Israel Egyptian judo fighter Islam el-Shehaby received backlash on Friday when he didn’t shake the hand or bow to his Israeli opponent Or Sasson, who defeated him on Friday. In response, the Egyptian Olympic Committee announced they will open an investigation into his actions.

El-Shehaby received pressure from Muslims not to fight against the Israeli, but the EOC threatened to strip him of his citizenship if he withdrew. He immediately retired after the loss.

The Egyptian Olympic Committee said it has summoned el-Shehaby to a hearing on the matter in order to listen to his version of events. The committee added that it will release its decision in the next 48 hours.

In response, a spokesperson for the International Olympic Committee said they “will review the case to figure out exactly what happened.”

“Sometimes over the course of such tournaments such things happen, but in general the idea of the Olympics is to build bridges between countries and nations, not destroy them,” the IOC added.

Before the match, Muslims littered the internet with demands for him to boycott the match:

“You will shame Islam,” wrote one angry follower. “If you lose, you will shame an entire nation and yourself. We don’t want to think what will happen if you lost to an Israeli. Victory will give you nothing. How can you cooperate with a murderous nation?”

However, attitudes changed with Muslims and anti-Israelis on social media because they cheered when Shehaby refused to shake Sasson’s hand.

Shehaby has some of the most anti-Israel views, which makes some think he lost on purpose “as a silent protest against Egyptian President Abdel Fattah al-Sisi who forced him to compete in the games.”

In the words if Clint Eastwood. – what a pussy.

Cheer up, they’ll probably saw his head off anyway.

The comments in the article and on the internet by Muslims pull back the veil to reveal the deeper truth about Islam. There is no radical Islam. There is just Islam. Most Muslims try to hide the truth of how they really feel. They come across as something else to in order to fool the non-muslims. Muslims may not seem radical, but they often support those who are. The article states, “….attitudes changed with Muslims and anti-Israelis on social media because they cheered when Shehaby refused to shake Sasson’s hand.” It was same feelings that came to the surface on 9-11.

The Left’s misguided and naive attempts to create gradations or sub-classifications of Islam have no basis in history or in theology. There is no recognition in the Islamic world of terms such as “moderate Muslim,” or, “radical Islam;” — these are Western creations, intended to whitewash and to make palatable to western eyes Islam’s inherently belligerent and supremacist nature and tenets and its bloodstained 1,400-year history of aggression, genocides and atrocities.

While Muslims certainly vary in their individual levels of devotion, there is no denying the Koran’s and the Hadiths’ explicit tenets which vilify non-Muslims and which exhort Muslims to kill or conquer them. A Muslim who doesn’t support the notion of jihad and the supremacy of sharia really is an apostate, not a true Muslim. In which case such people should really leave the Islamic tent and find another faith, entirely.

Wasn’t that the point of not shaking hands?

ME Islam, much like inner-city Chicago, remains a “shame” culture, in which public perceptions of honor/dishonor can have lethal consequences.

It functions very much like the Code Duello, through which salvation could be achieved through sanctioned vengeance. In this Egyptian’s case, the only way to compensate for the public “dishonor” of losing to a Jew was the very public refusal to shake hands.

He’s a dead man now because he lost the bout. No matter what, how or where, Arabs are dead meat whenever they encounter smarter better prepared people.

East is East,and West is West, and never the twain shall meet.

Maybe Trump is onto something.

In this incident, the worst traits of a vile, 1,400-year-old ideology of abject belligerence, aggression and hate are laid bare for all to see — childishness, spite, insecurity, resentment, anti-Semitism, and supremacism.

The Muslims who are cheering on the antics of this sore loser on really do not understand that they are helping to present their chosen ideology in the worst possible light. Coming on top of scores of violent terror attacks (which themselves are merely the latest in a 1,400-year-old campaign of genocides, conquests and atrocities waged by Muslims against non-Muslims, worldwide), they are doing themselves no favors from a public relations standpoint.

The world is waking up to the fascist scourge that is the totalitarian ideology of “Submission.”